A model who began her fashion career at the age of 16 has traded the catwalk for a job as a cleaner, helping to transform filthy, bug-ridden homes belonging to people struggling with mental illness.

Ellen Milgrau, 28, from Brazil, volunteers as a specialist cleaner to deep-clean the homes of people suffering from mental health issues like depression, which often leaves them unable to master even the smallest of everyday tasks, including cleaning and tidying.

Each week the model gets down on her hands and knees to try and transform the unlivable conditions in the homes – which can include everything from scrubbing filthy, festering toilets to removing maggot- and cockroach-infested furniture.

The selfless job could not be further removed from Ellen’s past career as a catwalk and fashion star, which she began when she was just 16 years old.

However, though the model put on a stylish display for the cameras, behind the scenes, she was battling her own mental health issues, struggling with depression for more than a decade before deciding she needed to change up her life for the good of her own mental health. 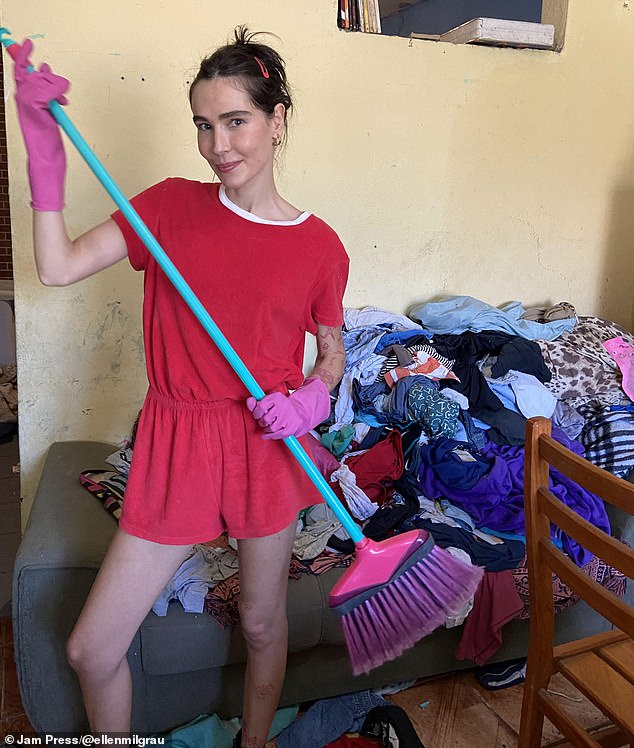 Ellen Milgrau, 28, has left behind her glamorous days in fashion and now spends her days cleaning out filthy homes, dealing with piles of clothing, dirty dishes, and bug infestations 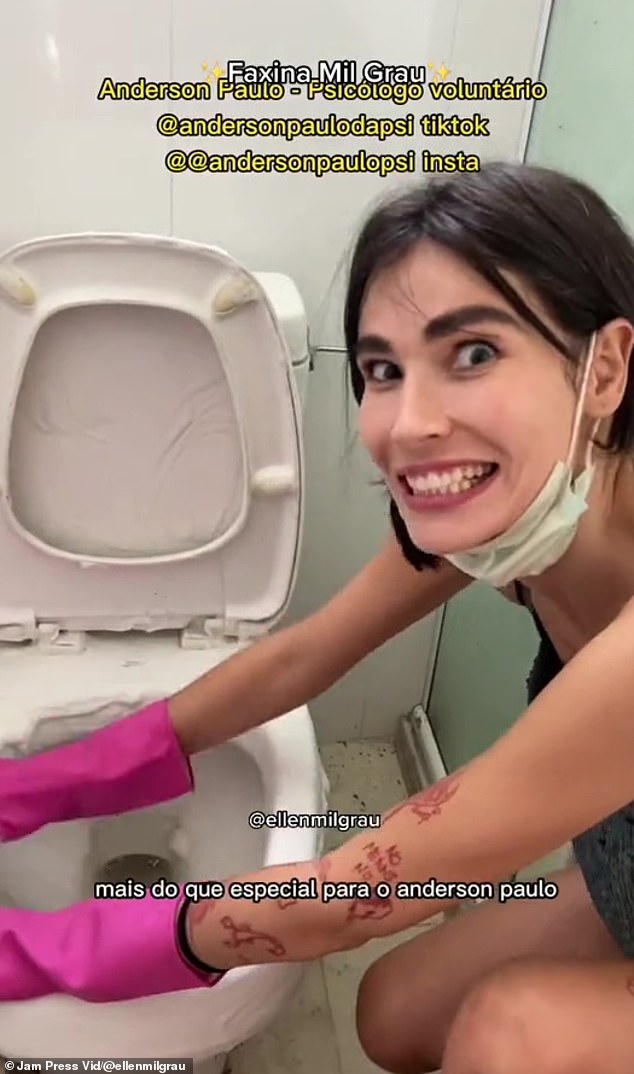 The model, shown cleaning a client’s toilet, has turned into a maid and become a TikTok star, with social media users commenting, ‘Wow how sad I’m glad you exist and have a giant heart’

It was then that she decided to start her own company, Milgrau Cleaning, through which she aims to help other people suffering with mental illness, while also giving herself a mental health boost.

Speaking about the inspiration for the project, Ellen revealed that she came up with the concept with chatting with a friend who also suffers from depression. She says the pair were making ‘light-hearted jokes’ about ‘spending the whole day cleaning’ – however, just a few days later, her pal phoned Ellen up and asked whether she could actually lend him a hand with cleaning his space.

‘I got the idea when I went to visit a friend who also has depression. His house was a complete tip,’ she recalled. ‘We started to make light-hearted jokes saying we should spend the whole day cleaning, but a few days later he reached out for help for real.’

The moment marked the start of something new and exciting for Ellen, who quickly discovered that the act of deep cleaning and helping others worked wonders for her own mental state.

However, while she describes her work in an incredibly positive light, she admits that there are some days on the job that are harder than others – particularly when it comes to some of the filthier homes that she has cleaned. 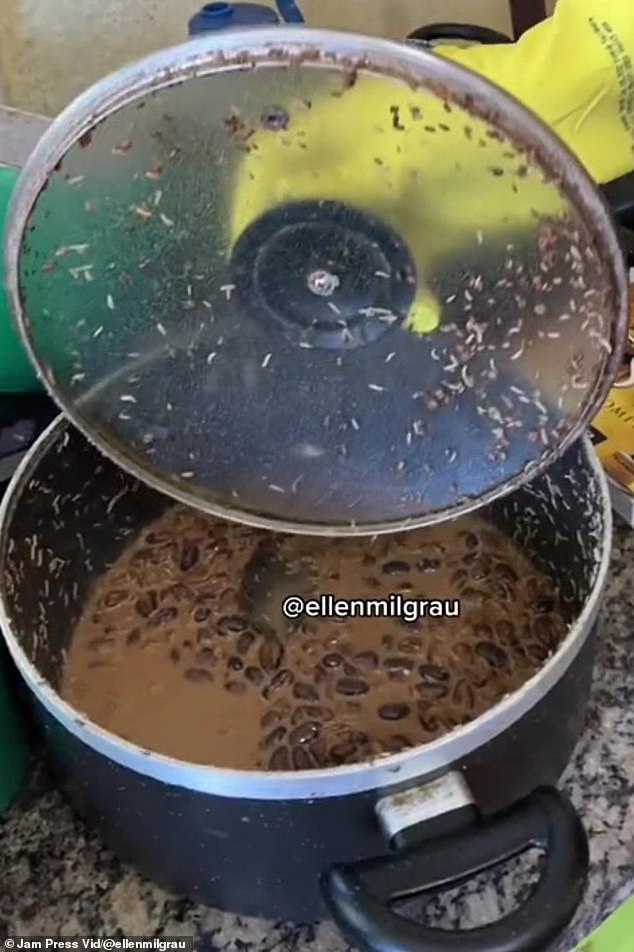 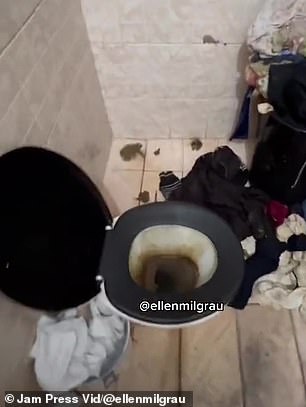 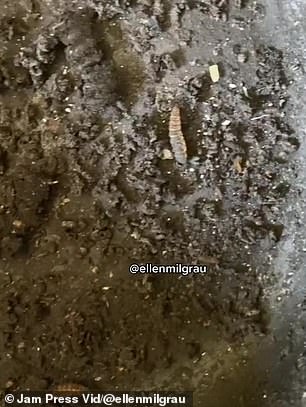 Ellen had never seen such filthy homes prior to launching her cleaning project, Milgrau Cleaning, where she was introduced to dirty toilets and maggots, cleaning for those dealing with depression 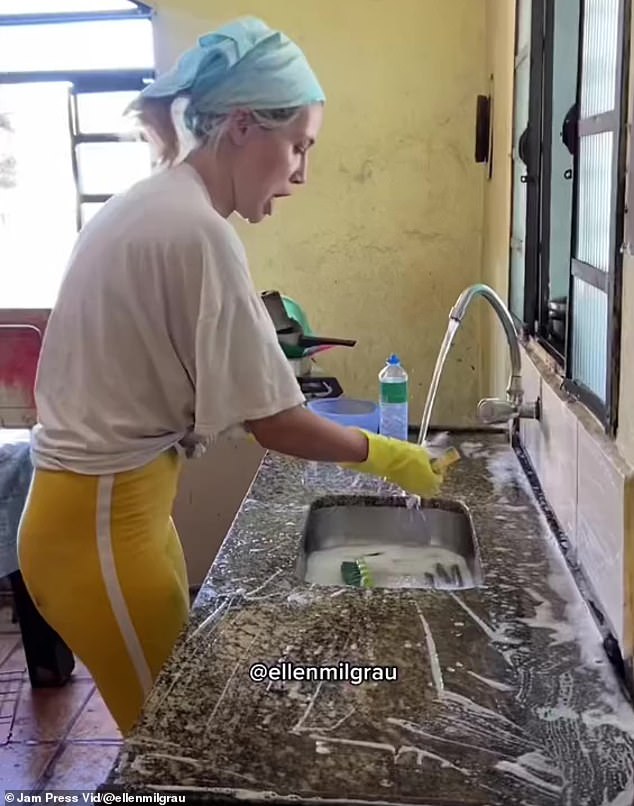 The model swaps in designer clothes for gloves and rags as spends all her time cleaning homes, which benefits her mental health

‘The worst house I’ve seen was when there was a kitten eating trash and cockroaches,’ she shared. ‘The house was full of diapers, which were full of giant maggots. The young girl who lived there had lost her job.’

She has also faced piles of dirty of pots and dishes with rotting food inside.

But despite the less-than-pleasant situations Ellen finds herself in, she says the overwhelmingly positive reactions of the people she cleans for always make the mess and filth worthwhile in the end.

‘I know how the dirty house affects when people are sad so I wanted to help out,’ she said. ‘I always notice their relieved face the moment we finish the cleaning.

‘It’s amazing to see… they feel that they’re not alone in this world. Depression often leaves you racked with guilt.

‘It’s a two-way street for me because not only can I help others but it also helps with my own depression. It’s good to do good.’

Having witnessed first hand the incredible impact her work had on her clients, Ellen decided to start spreading the message, in an attempt to raise awareness about the realities of living with mental illness, particularly in her home country of Brazil, where she says people often disregard conditions like depression.

She began documenting the interior transformations on a TikTok account, which quickly went viral, racking up a staggering 1.3 million followers in just two months. 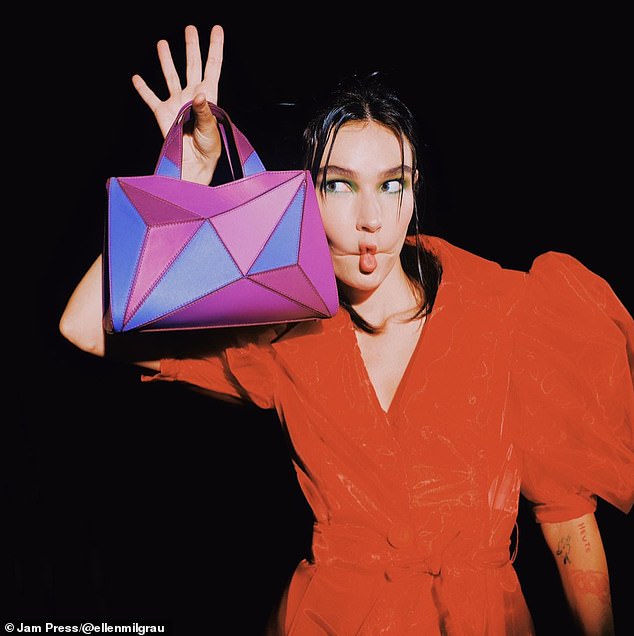 While Ellen is known for her work in front of the camera, the model often struggles with depression herself which is why she began cleaning houses 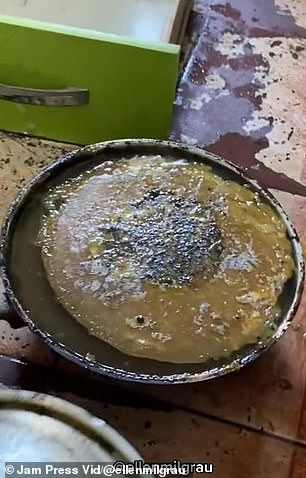 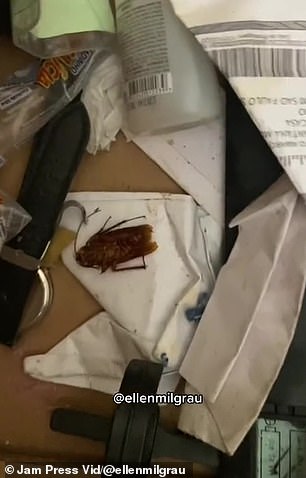 Ellen takes her fans along her cleaning transformation on her TikTok, documenting everything from dirty pans to insects living among the cracks of the home, since starting her cleaning project, the model has become no stranger to filth. 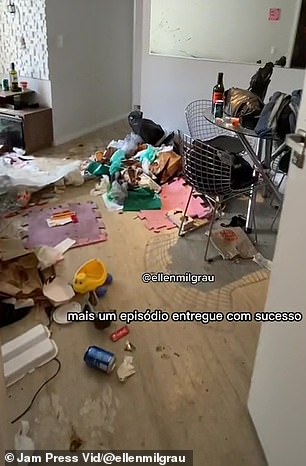 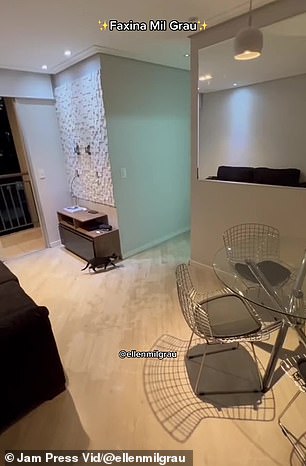 Ellen completely transforms homes for home owners dealing with depression, although she walks into a a home filled with dirt, she makes sure to leave it spotless

‘People are really interested in the cleaning because in Brazil people often question depression,’ she explained.

‘They think depression doesn’t exist or it’s just an excuse to not do things. But what I’m doing is changing people’s ideas.

‘Now people come directly to me and say that they had no idea of the correlation between depression and things like the cleaning of the house you live in. It’s really nice to see that we can inspire people l can open people’s eyes to just how serious depression is.’

Ellen’s TikTok already appears to be making a positive impact with her followers, many of whom have been quick to gush about her selfless career choice.

One social media user said: ‘This is the most amazing project I’ve ever seen.’

‘Wow how sad I’m glad you exist and have a giant heart,’ added another user.

If you or anyone you know is struggling with depression, reach out to the National Depression Hotline at 1-800-442-4673