Model exposes the vulgar sexual messages she receives on Instagram

A model is exposing the shocking number of crude, sexual, and even aggressive messages she receives on Instagram by sharing them all on an account that aims to highlight the abuse that women can face on the social media site.

Paige Woolen, 28, from Los Angeles, California, is used to getting attention from her 174,000 followers but she has grown fed up with sleazy fans sending her inappropriate comments.

So the brunette, who has appeared in Maxim Australia, decided to expose the worst lines she’s ever received, including men asking her to give them oral sex and to send them nude photos of herself.

Hitting back: Model Paige Woolen, from Los Angeles, has started an Instagram account that is dedicated to exposing the shocking messages she receives from men on the social media app 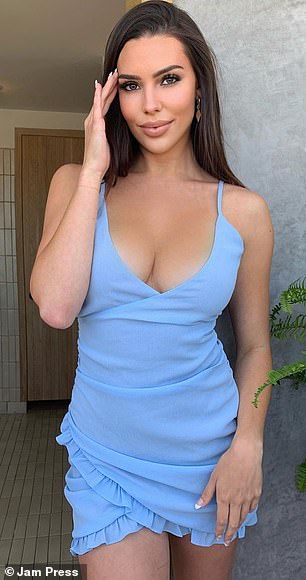 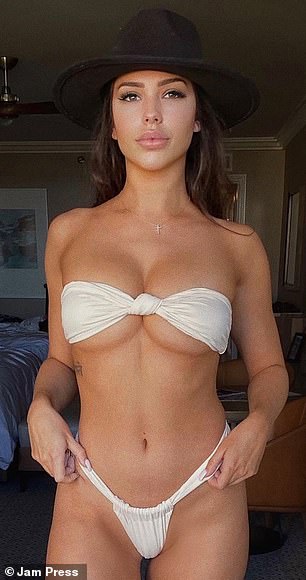 Laying it bare: The 28-year-old boasts more than 174,000 fans on her personal page, where she often posts pictures of herself in swimwear and sexy ensembles

Negative attention: However, as demonstrated on her new Instagram account, Dudes in the DM, many of her followers take her sexy images as an invitation to DM her rude messages 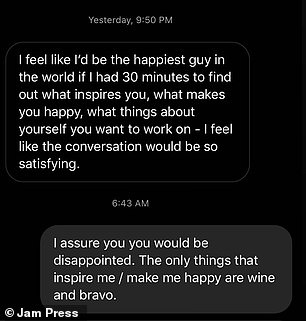 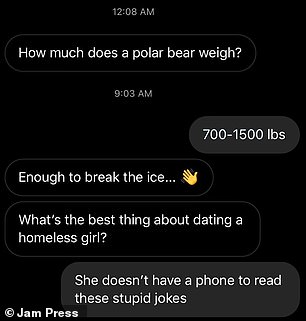 Shocking: Paige is now exposing the vulgar messages she faces every day, revealing that she receives dozens of unwanted DMs from followers, many of which are sexual in tone

The Instagram account, called Dudes in the DM was launched a week ago and already has nearly 10,000 followers. It features a complication of messages ‘from models DMs to your eyes’ that Paige has received herself, as well as contributions from other women.

Speaking to Jam Press, Paige said: ‘I post photos in my bikini and lingerie on my Instagram which warrants a lot of positive and negative attention (of course).

‘I’ve struggled over the last year on how to deal with the negative remarks, the slut-shaming and threats all because I’m posing in a bikini.

‘I don’t believe that nudity is sexual.’

The model believes that she should be able to post whatever kind of content she wants on Instagram, insisting that the fact she poses for sexy or risque photos does not give her followers a right to send her abusive or vulgar messages. 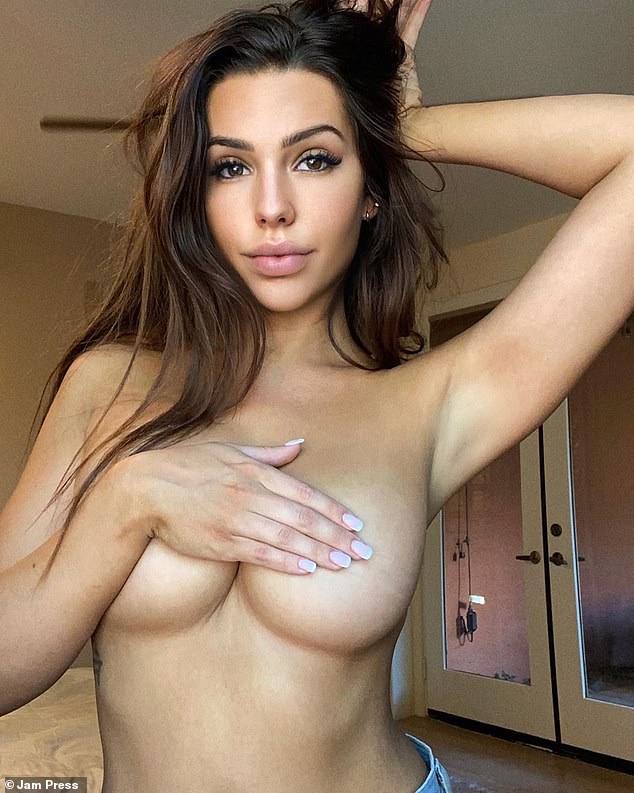 Taking a stand: The model says she’s struggled to deal with the negative messages she receives, but she insists that posting nude photos doesn’t mean she should have to face abuse 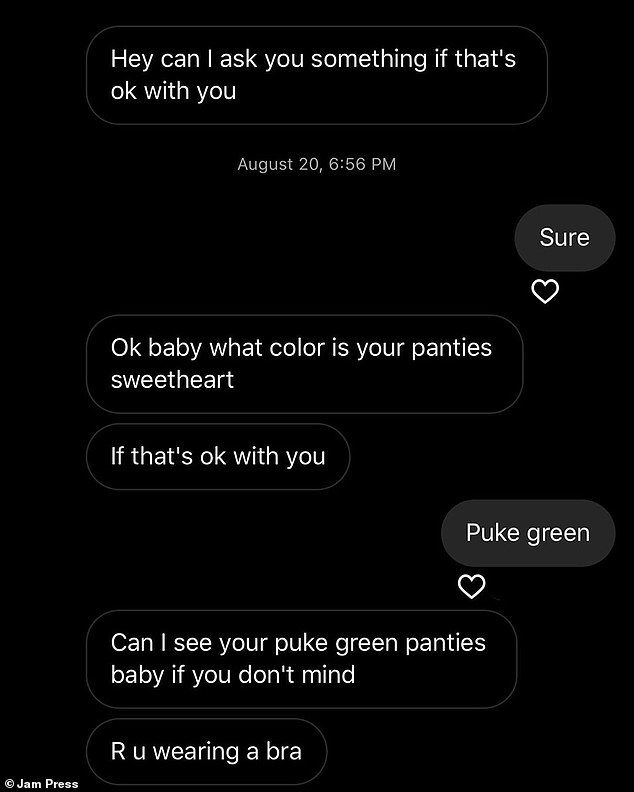 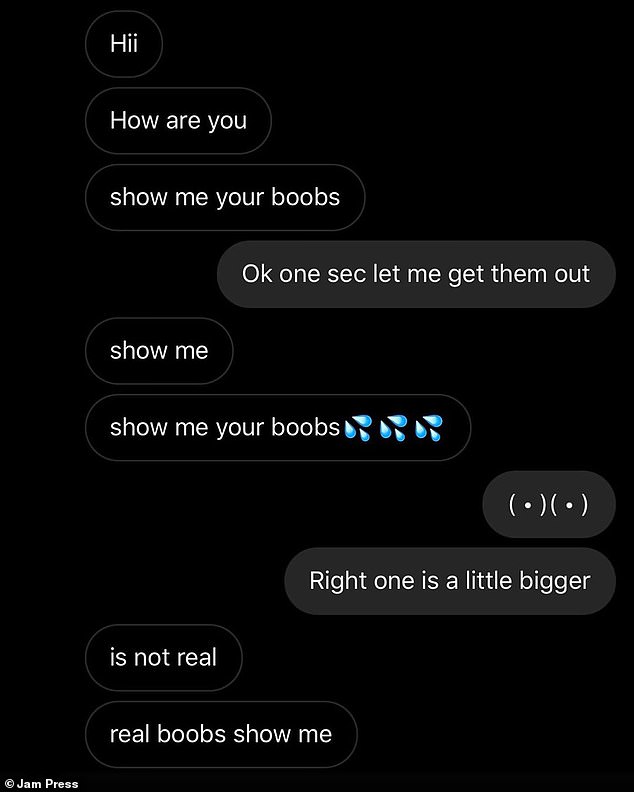 Vulgar: Many of the messages include demands for nude images, which Paige sometimes responds to with a joke photo or reply

‘Whatever makes you feel sexy is up to you and no one should feel like they have the right to shame you for that,’ she said.

Paige has struggled with the negative attention for some time now, but was never sure of the best way to handle it, revealing that she has tried everything from ignoring the users to responding with a humorous message of her own.

‘I tried different responses with these guys and girls that DM me and I found solace in meeting the DMs with humor,’ she confessed.

‘For the last few months I would respond, laugh and screenshot, and that was my filtering process for not letting these crude messages get to me.’

But while Paige never intended to do anything with the screenshots other than laugh at them in private, or perhaps share them with friends, the solace of quarantine saw her come up with a more creative and impactive use for them. 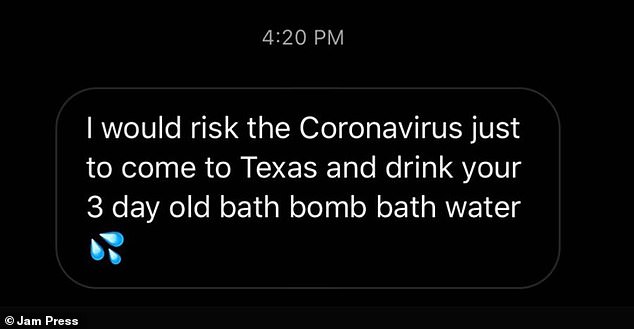 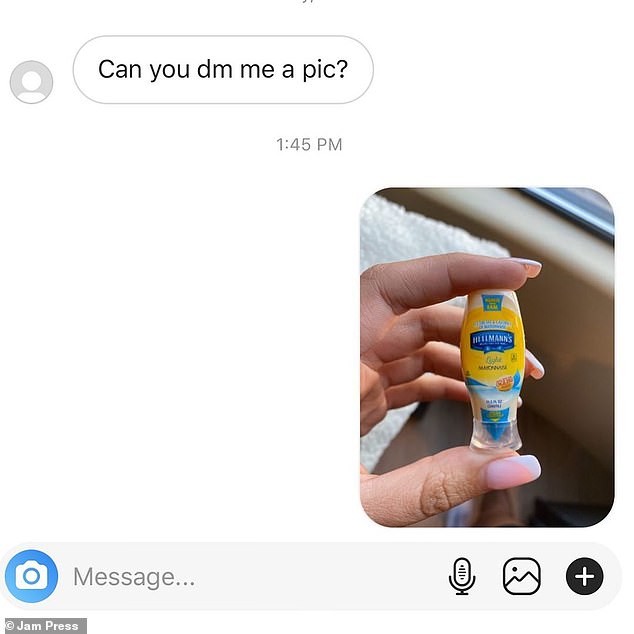 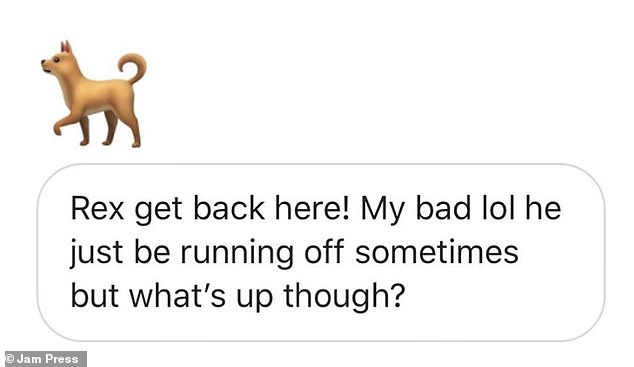 Weird: A number of the messages are incredibly bizarre and make little sense

‘Quarantine hit and I was stuck in the house with my phone and my French bulldog,’ she said.

‘I thought maybe If I share these I can shed some light on the kids of things being said online.’

Paige hopes that her Dudes in the DM account will help other Instagram users who are in similar positions and struggle with the abuse that they are receiving on social media.

‘Maybe I can bring people together that are getting affected by similar messages and start a community – or at least bring some humor to the whole situation,’ she added.

‘And that was how it was born.’

The posts themselves range from vulgar to ludicrous – with all manner of DMs popping up on Paige’s new account, after making their way into her inbox. 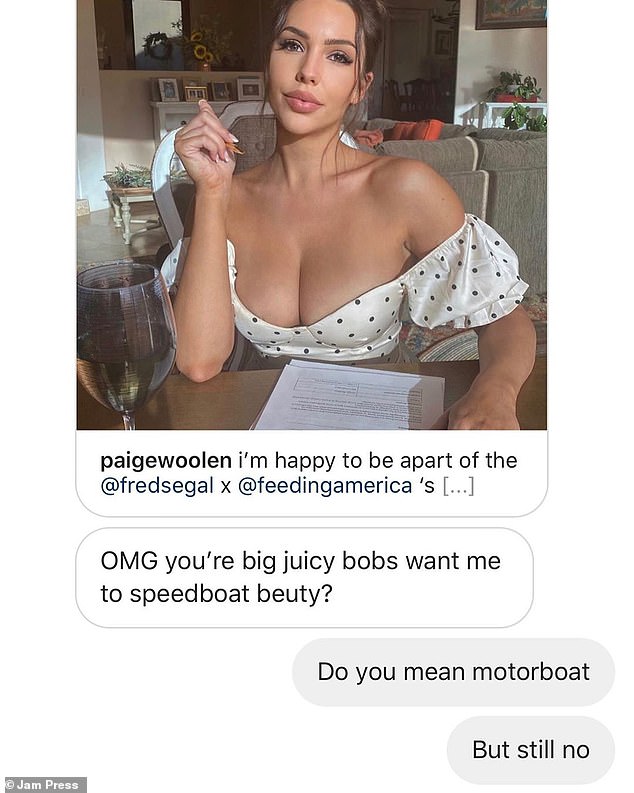 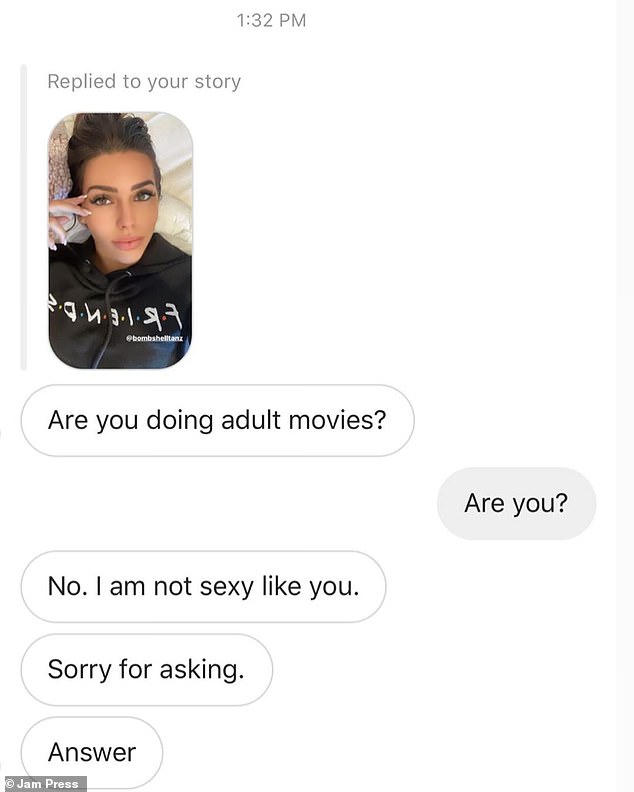 Upsetting: Paige says that she began responding with humor as a way of coping with the abusive messages, and she would then screenshot the conversation so she could laugh at it 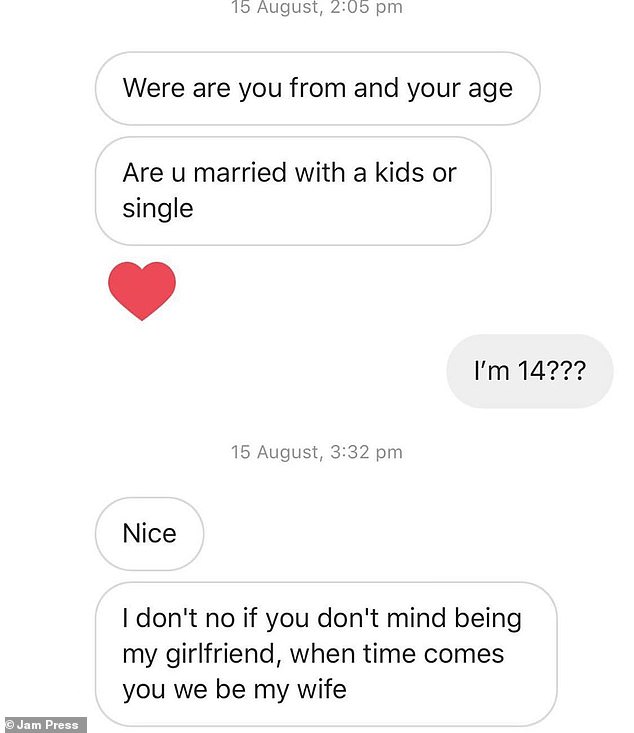 Lightbulb moment! While in quarantine however, Paige had the idea to share her messages on a separate Instagram account – which has since amassed close to 10,000 followers 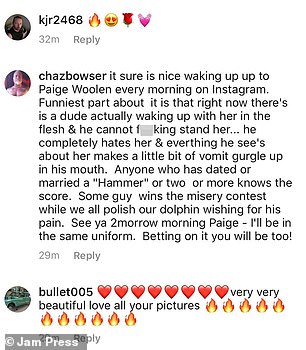 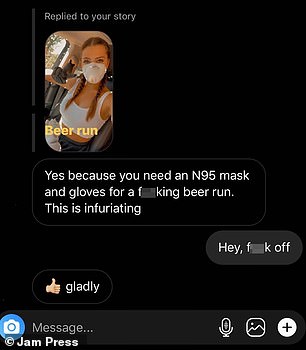 Spreading a message: As well as sharing the comments and DMs that she receives, Paige is also accepting submissions from other women

‘I’ll fill that p***y all the way to the top,’ reads one particularly vulgar message.

Another man tried to get a date with Paige by suggesting that incest is attractive, telling the model: ‘Damn if that’s really u, ur hot even ur son would get hard just by looking at you.’

Other men have tried to excuse their crude wording, with one writing: ‘I do not view women as sexual objects, but man your t*****s are f***ing perfect’.

As well as sharing her own DMs, Paige is also taking submissions from other women who face similarly vile messages from their followers.

The women supplying DMs to Paige for her new account are also sending hilarious replies to their so-called admirers, such as Christina Riordan, a model and nutritionist, who received a DM from a man who asked her to send a photo of her ‘a**’ – to which Christina replied with a pic of a donkey’s behind. 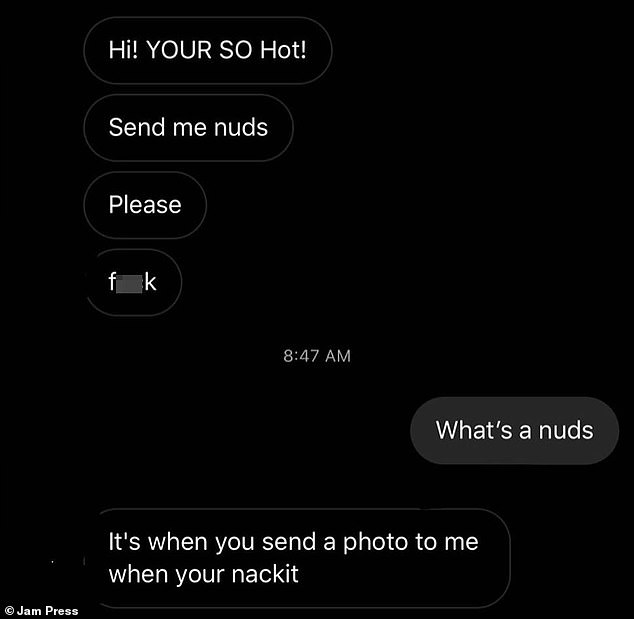 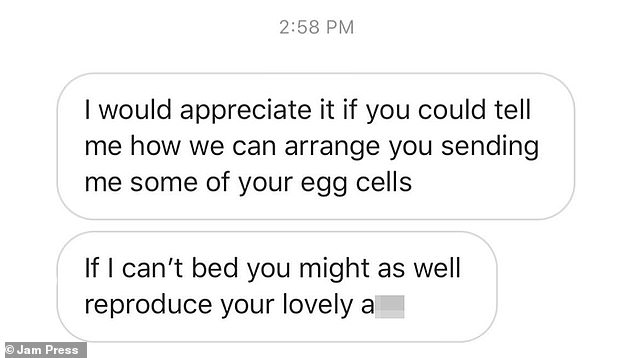 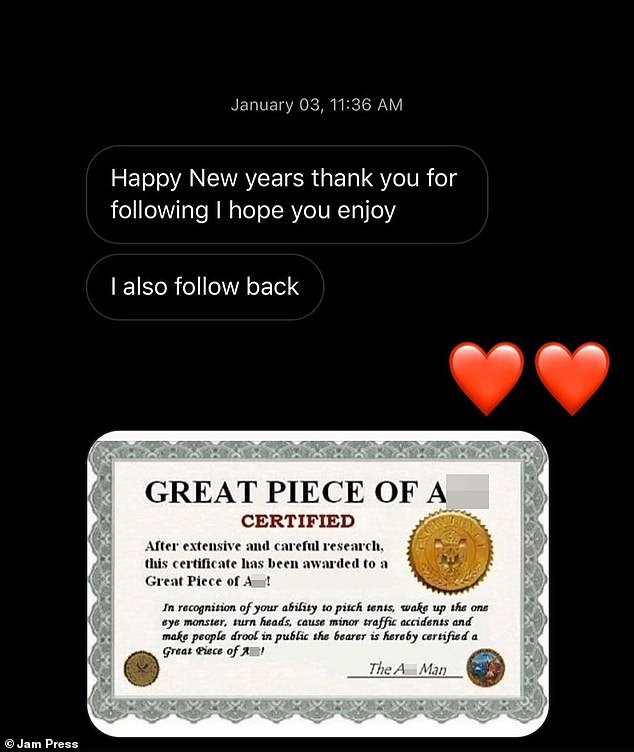