Australian model Jordan Barrett scolded Sally Obermeder during a rather awkward interview on Channel Seven’s The Morning Show on Thursday.

The 21-year-old fashionista was left unimpressed after Sally and her co-host Larry Emdur repeatedly got his age wrong by saying he was 23.

Jordan seemed uncomfortable at times during his TV appearance. He failed to sit still, was seen physically shaking and later claimed he was ‘still adjusting to the time’ after staying up late the night before eating cheese.

‘I’m still adjusting to the time’: Jordan Barrett (pictured) scolded Sally Obermeder for getting his age wrong  during an awkward interview on The Morning Show on Thursday

Introducing the segment, Sally said: ‘Jordan Barrett has taken the fashion industry by storm and he’s only 23.’

As Sally politely corrected herself, saying, ‘You’re only 21? He gets younger as he sits here!’, Jordan added: ‘They keep getting it wrong but yes, I’m still 21.’ 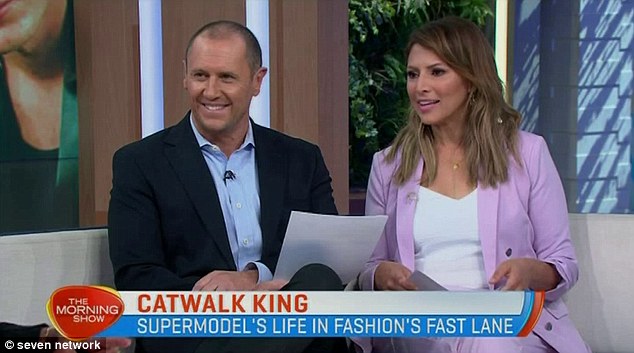 Awkward introduction! When Sally Obermeder (right) introduced Jordan as 23, he scolded her by saying, ‘One – I’m 21. They keep getting it wrong but yes, I’m still 21’. Left: Larry Emdur 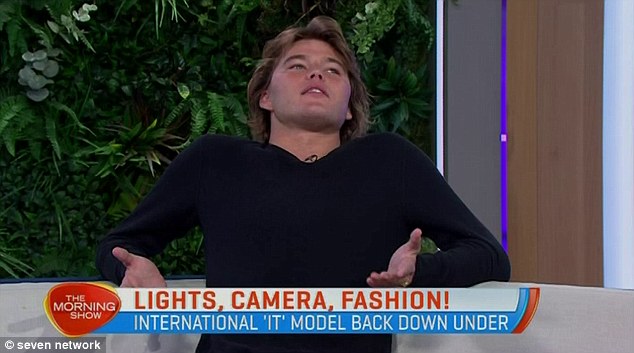 Feeling nervous? Throughout the interview, Jordan could be seen physically shaking and seemed unable to sit still

Larry then attempted to inject some humour into the error by joking that Jordan was actually 14 years old before the interview commenced.

Meanwhile, throughout the interview Jordan could be seen physically shaking.

He seemingly couldn’t sit still, repeatedly fidgeted with his hands and appeared somewhat uncomfortable while answering the questions.

‘I’m still adjusting to the time,’ Jordan offered up as an explanation after recently flying back to Australia for the interview.

He then explained that he was feeling drowsy after attempting a bizarre, cheese-based ‘dream challenge’ the night before.

‘Last night, I was trying this dream challenge that my friend was showing me about,’ he said.

‘You know, if you eat too much cheese you can have weird dreams? We were trying to get into this lucid dreaming thing… and I ended up just getting very drowsy and I ate too much cheese before I went to bed, so it didn’t go so well.’ 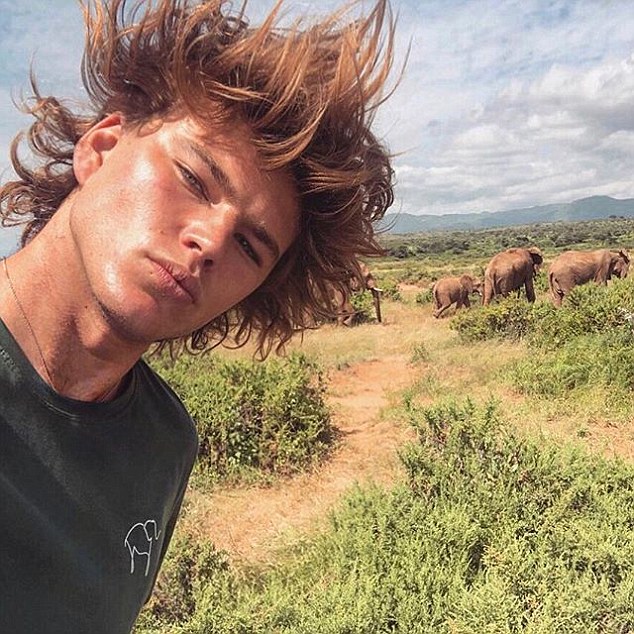 Jet-lagged? Jordan explained he was still ‘adjusting to the time’ after flying into Australia, and had been up late the night before eating cheese

Another awkward moment happened when Sally joked about how Jordan’s recent ski trip could have hindered his modelling career if he had injured himself.

‘We hear you went skiing? Surely your agent panics when you’re on the slopes because of the money maker,’ Sally said, referencing his facial features.

‘They actually organised it – so I don’t think they were that worried,’ he replied.

As Jordan then explained how he lost his car keys on the mountain, Larry quipped: ‘Being as famous and wealthy as you are, couldn’t you just buy another car and drive home?’

‘No,’ he responded bluntly. 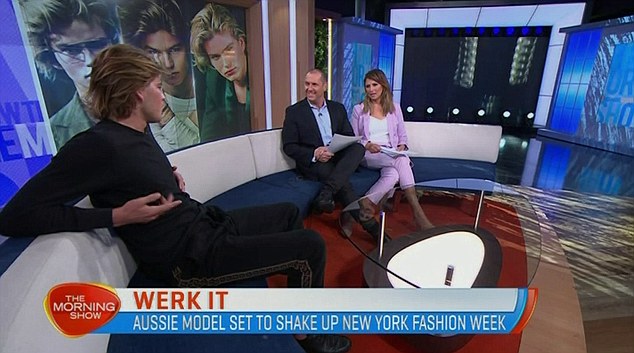 ‘I ended up just getting very drowsy and I ate too much cheese before I went to bed, so it didn’t go so well’: The ‘challenge’ didn’t work very well on Jordan

While discussing Jordan’s success in America, Larry then steered the conversation towards New York Fashion Week.

He asked: ‘When you hit the runway there, do you have to really turn it on?’

Jordan made headlines in 2016 when he walked off The Morning Show after seemingly forgetting that the program was being broadcast live.

The Byron Bay native later claimed that the on-air gaffe was simply a ‘mistake’ and the incident made him ‘nervous’ about appearing on Australian TV. 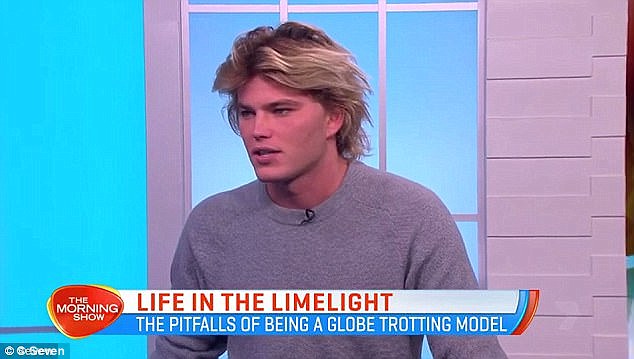 Throwback: Jordan made headlines in 2016 after walking off The Morning Show- seemingly forgetting that the program was being recorded live