Instagram model is told to ‘cover up’ by Jetstar staff and given a fluro vest to wear because her crop top is ‘too small’ – so were the flight crew too harsh?

An Australian Instagram model was left fuming after being forced to cover up on a Jetstar flight, saying she felt ‘humiliated’ by an attendant who looked at her with ‘disgust’.

Isabelle Eleanore took to social media to vent after being forced to wear a high-vis vest over her crop top by a flight attendant, before taking her seat on the Jetstar flight from Gold Coast to Melbourne on Monday.

Ms Eleanore pointed out she had not been stopped and asked to cover up by any other airport staff until she tried to board the flight to Melbourne.

Instagram model Isabelle Eleanore fumed after being forced to cover up her crop top on a Jetstar flight, saying she felt ‘humiliated’ by an attendant who looked at her with ‘disgust’

‘So they made a huge scene when I stepped on the plane and made me wait in front of everyone while they searched for something to cover me up with,’ Ms Eleanore posted to Instagram and Twitter.

Should Isabelle Elanore have been allowed to wear her choice of clothing on the Jetstar flight?

‘Then I had to walk all the way to my seat wearing this vest . This is discrimination and humiliation Jet Star Australia.’

‘Apparently my top is too small and I couldn’t fly without covering up. If I had small breasts I guarantee they wouldn’t have said anything.’

When the attendant found her a high-vis vest, Ms Eleanore commented: ‘Thank the lord she found something to cover my dirty sinful skin.’

On Tuesday Ms Eleanore posted a follow-up to her Instagram account framing the incident as a breach of freedom. 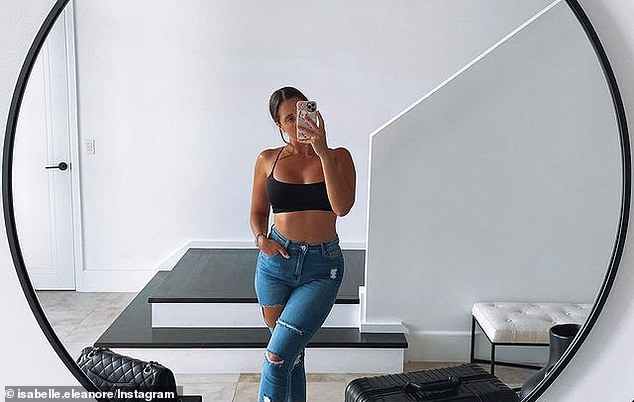 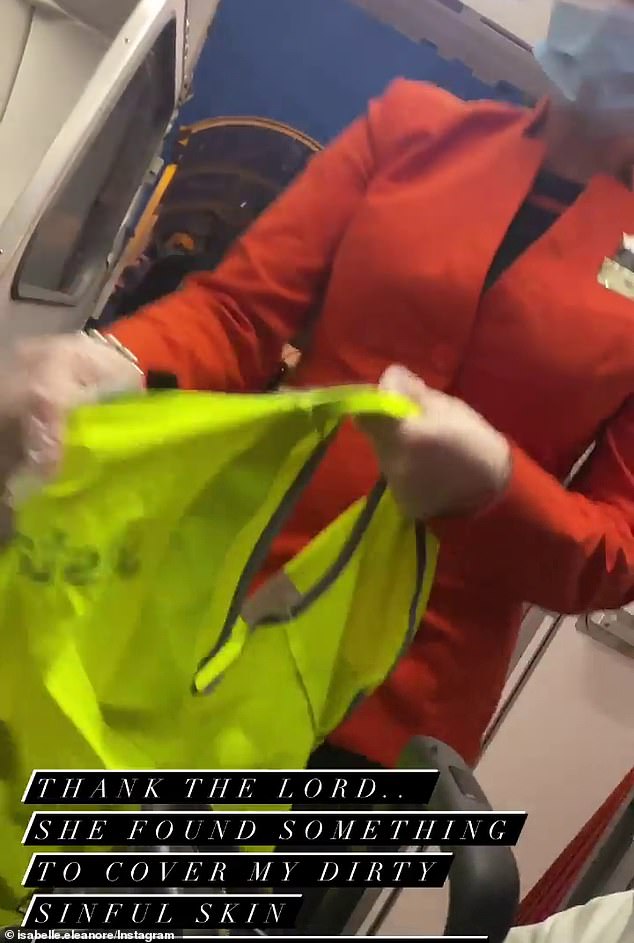 ‘The reason this is striking a chord with so many people isn’t a reflection on me, but a reflection on society, and the belief that society should be able to dictate what is acceptable for people (more so women) to wear and do.’

‘To be publicly shamed and humiliated over a clothing item and/or the exposure of skin is archaic and discriminatory behaviour.’

On Monday, Ms Eleanore’s husband Jeremy Szwarcbord posted: ‘Apparently [her top] looked like a bikini and nobody told her so she has to … cover some skin.’

‘They didn’t tell us anywhere before the flight. Now she looks like a COVID hazard.’

‘Jetstar Australia this is pathetic. Your staff need to be on the same page.’

Ms Eleanore was also upset at the different interpretation of rules for clothing on Jetstar flights by different staff.

‘The lady said I can’t believe they didn’t say something when you checked in and looked at me like she was disgusted,’ she said.

‘PS: Should I really be wearing someone else’s filthy uniform in the middle of a pandemic? Get me the f*** off this plane.’

Ms Eleanore later defiantly told 9News she she have been allowed to wear what she wanted.

‘I didn’t think I’d have to deal with something like that – it’s 2021, I should be able to wear what I want to wear,’ Ms Eleanore said. 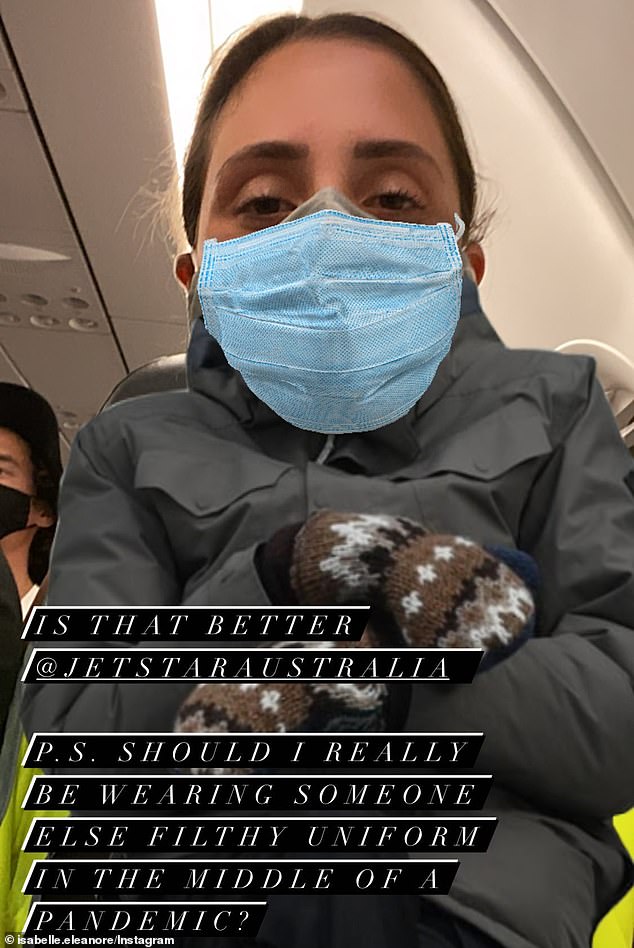 Ms Eleanore said she felt ‘victimised and degraded’ with the flight attendant calling the rest of the crew in search of more attire for her to wear.

She agreed to wear the hi-vis vest out of fear she would be kicked off the plane if she refused.

‘I didn’t know how to deal with it and I didn’t want to get kicked off the flight so I was like I’m just going to do what she says.’

Jetstar later apologised: ‘We’ve contacted Isabelle about her recent experience and have apologised for the way the situation was handled,’ Jetstar said.

‘There was a misunderstanding of what our policy was, and we have reminded our crew of our dress requirements.’

‘While we do have basic dress requirements on our flights (ie. shoes), we do not have any policy regarding crop tops.’