Modern ‘Romeo and Juliet’ who ‘fell in love at first sight’

Two modern day star-crossed lovers have proved romance is still thriving in the fair city of Verona after falling in love with each other from their balconies during lockdown.

Michele D’Alpaos, 38, told Radio 4’s Today programme how he first laid eyes on Paola Agnelli, 39, when they both stepped out to their terraces to listen to music being performed by local musicians as a way to lift the community’s spirits during the coronavirus crisis.

Among those performing was Paola’s violinist sister, Lisa Agnelli, whose rendition of Queen’s We Are The Champions caught Michele’s attention from across the street and he found his eyes drawn to Paola, who was helping with the sound.

Paola described how ‘the music was like an arrow fired by Eros’ when she saw Mr D’Alpaos from the sixth floor of her apartment where she lives with her mother and sister. Paola Agnelli, 39, was helping her sister with the sound system while playing the violin. Michele D’Alpaos, 38, laid eyes on Ms Agnelli from her balcony

And her real-life Romeo has revealed how a ‘love was born’ after he found out who Ms Agnelli was from his sister Sylvia who knows her from the gym.

Lisa Agnelli told BBC Radio Four: ‘Every day I play the violin on the balcony and on that day, March 17, my sister was helping me with the audio.

‘Michele saw my sister and fell in love while I was playing We Are The Champions.’ 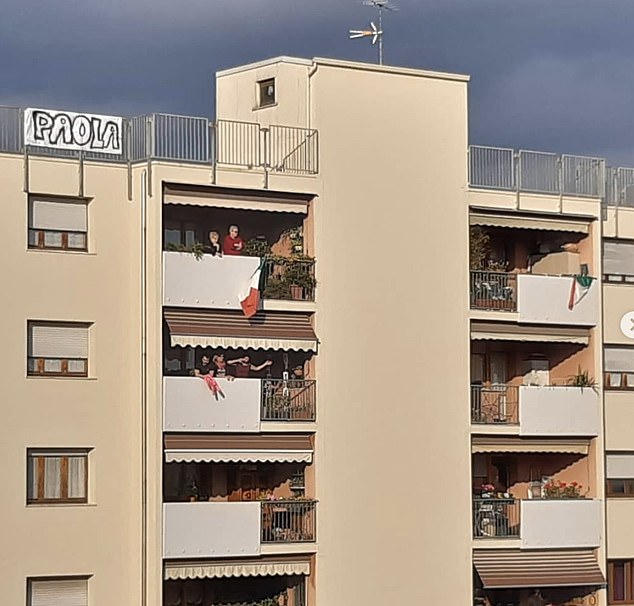 In a bid to announce his love, Mr D’Alpaos erected a huge banner on the top floor of the building with ‘Paola’ written on it

Ms Agnelli, a lawyer, added: ‘I went out onto the balcony to see Lisa playing her violin and I saw Michele standing on the opposite balcony I realised he was my friend Sylvia’s brother and I said: ‘What a handsome man”.

Speaking about the evening she received a message, Ms Agnelli said: ‘That night we wrote to each other until the early hours. 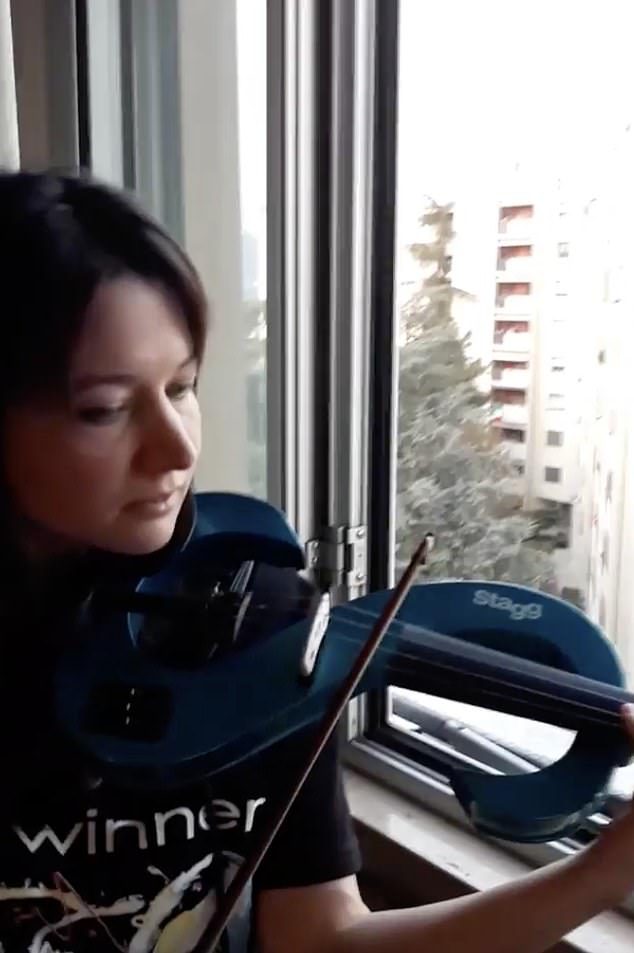 Lisa Agnelli (pictured) told BBC Radio Four: ‘Every day I play the violin on the balcony and on that day, March 17, my sister was helping me with the audio’

‘We realised we shared the same values and that those would be a solid base for a relationship – we are both determined people but also kind and sensitive.

In a bid to announce his love, Mr D’Alpaos erected a huge banner on the top floor of the building with ‘Paola’ written on it and neighbours have been making detours to catch sight of the proclamation of love.

Ms Agnelli said: ‘He organised a big surprise for me by writing my name on a bedsheet and hanging it out on the balcony – I was very moved by it. Michele knows how to caress my soul with his sweet words.’

And a third floor neighbour, who is also a DJ, has agreed to dedicate a song every day for the couple from his speakers. 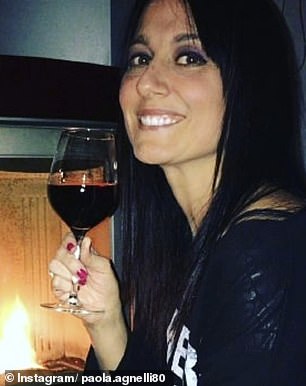 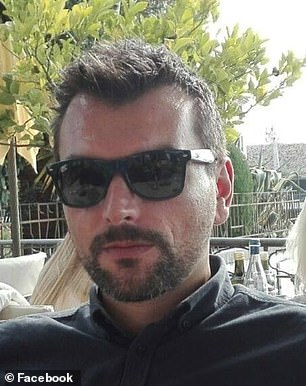 Ms Agnelli said she is happy for Mr D’Alpaos to ‘substitute a kiss with his words’ (left). Mr D’Alpaos tracked down Paola’s Instagram account and the pair started messaging (right)

The couple, who are both unmarried, have lived opposite each other for most of their lives but have never met properly apart from a chance meeting a year ago.

And the pair have vowed not to meet, even while abiding by social distancing, as Mr D’Alpaos said he wants to ‘protect’ Paola because he is in contact with people while working in a bank.

Mr D’Alpaos told BBC Radio 4 how he longs to kiss Ms Agnelli ‘for an hour’ after describing their relationship as ‘magic’.

But while the lockdown is in place, Ms Agnelli said she is happy for Mr D’Alpaos to ‘substitute a kiss with his words’ as they anticipate their date sitting on a bench in local park.