Moeen Ali could step in as all-rounder for England

All systems Mo! Emergency call for Ali to step in as all-rounder for England as Chris Silverwood confirms he will discuss his inclusion with captain Joe Root after stunning form for Birmingham Phoenix in the Hundred

Moeen Ali could be forgiven a wry smile if, as expected, he receives a call from Chris Silverwood on Tuesday asking him to rush to Lord’s and join the England squad for the second Test.

It would not be easy for Moeen to switch straight from the Hundred to take on India in a crucial match but his international career has rarely followed a smooth path.

He has been messed around more than most and an emergency call-up to what is already a 17-man squad at a time when his very Test future seemed in jeopardy would be the latest twist to an unpredictable tale.

But it is a move that would make sense. In the drawn first Test, England lacked balance in the absence of Ben Stokes and also the variety a spinner would bring.

‘Moeen is certainly under consideration,’ said head coach Silverwood on Monday. ‘It’s something I will talk about with Joe Root.

‘We know he’s a fine cricketer and he’s showing good form in the Hundred at the moment, even though that’s a different format. It’s something that has to be in our mind.’

That good Hundred form continued on Monday when Moeen smashed 59 off 28 balls for Birmingham Phoenix against Welsh Fire. 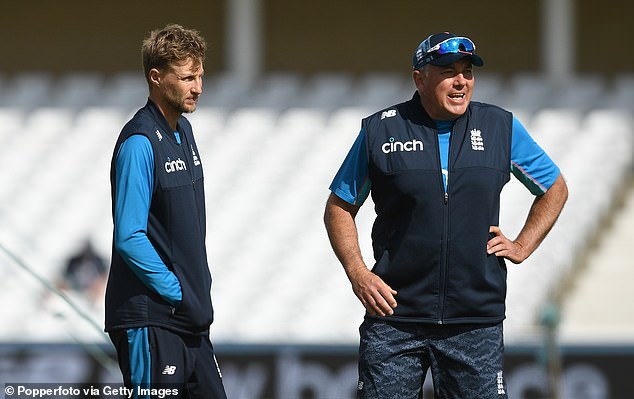 It is something of a mystery why Moeen has been ignored ever since the mix-up in communication in Chennai last winter when Root said he had ‘chosen’ to go home after the second Test when he was merely following England’s rest and rotation plan.

England’s last-ditch effort to go back on their policy and keep Moeen in India after he had taken eight wickets and smashed 43 off 18 balls in a losing cause in the second Test was a muddled piece of thinking he was entitled to reject.

The reason for Moeen’s latest absence from the red-ball picture this year has more to do with England’s Ashes planning and their belief that finger spinners do not usually prosper in Australia — certainly not one with Moeen’s dismal record there last time.

But Silverwood and Root have to start thinking of the here and now and England would look a stronger team who are able to select a five-man attack if they turn to Moeen at Lord’s rather than finally give a game to the unfortunate Jack Leach. They would be allowed to add another player to their ‘safe team environment’ because Moeen has been part of a Hundred Covid-testing scheme. 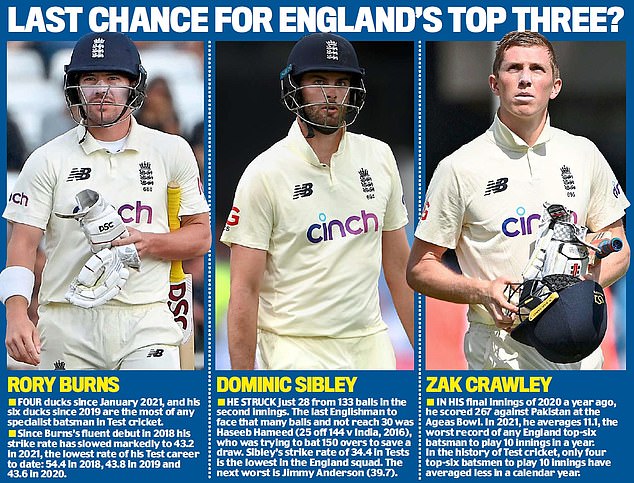 ‘All I’ll say is my mind’s not closed to anything,’ said Silverwood. ‘If there’s a good suggestion and it works for the team it’s something we will have to consider.’

The potential return of the off-spinning all-rounder is not the only thing England have to consider. They have all sorts of issues — particularly the fragile batting.

Silverwood seemed to suggest on Monday that a top three which does not seem fit for the purpose of scoring the big first-innings runs vital to his template for Test success will be given one more chance at Lord’s. If they are, Zak Crawley and Dom Sibley, in particular, will surely be drinking in the last-chance saloon.

‘We have to accept we are not getting those runs so we have to look at why,’ said Silverwood. ‘Questions have been posed not only to the batsmen but also the coaches — how do we give the batsmen the best opportunity? 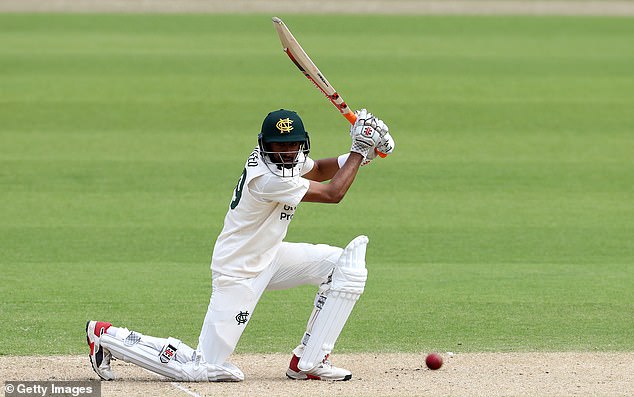 ‘I have invested in these guys and I would rather be accused of giving somebody one too many chances than not enough. But if it isn’t working I will have to take a view as to how I change it.’

Haseeb Hameed is very much in contention now and could yet make a return just as dramatic as Moeen’s if he is preferred to Crawley at Lord’s after the problems he has experienced since his dream introduction to Test cricket in India five years ago.

‘I’m confident he’s as ready as he could be,’ said Silverwood. It is a very different looking Hameed now, having filled out and grown his hair long since he left Lancashire to start again under the tutelage of Peter Moores at Nottinghamshire.

‘He put his best foot forward when he scored a hundred at Durham against India in the build-up to this series and what he did in the Championship at the start of this season shows there’s a lot of class there. He is making a very strong case and at some point we may well give him an opportunity.’