Mohamed Hadid goes bankrupt: Property tycoon father of Bella and Gigi files for Chapter 11 a week after a judge ordered him to demolish his ‘eyesore’ LA mega mansion

Property tycoon Mohamed Hadid has filed for bankruptcy – a week after a judge declared that his notorious Los Angeles mega mansion is dangerous and ‘must come down.’

The filing – made just hours before the start of the Thanksgiving holiday – raises the concern that if Hadid doesn’t pay the estimated $5million it will cost to demolish his half-built colossus, then LA’s taxpayers will have to foot the bill.

He told Judge Craig Karlan that not only could Hadid ‘not afford’ to pay for the tearing down of his giant home, but he also didn’t have the $500,000 fee being charged by the judge appointed receiver to supervise the demolition.

On November 20 Judge Karlan took the responsibility of demolishing the 30,000-square foot ‘eyesore’ away from Hadid and instead gave the job to receiver Douglas Wilson – the same receiver who oversaw the $35 million repair of Donald Trump’s California golf course when three holes collapsed into the ocean.

Mohamed Hadid, 71, the property tycoon father of supermodels Gigi and Bella Hadid, has filed for bankruptcy 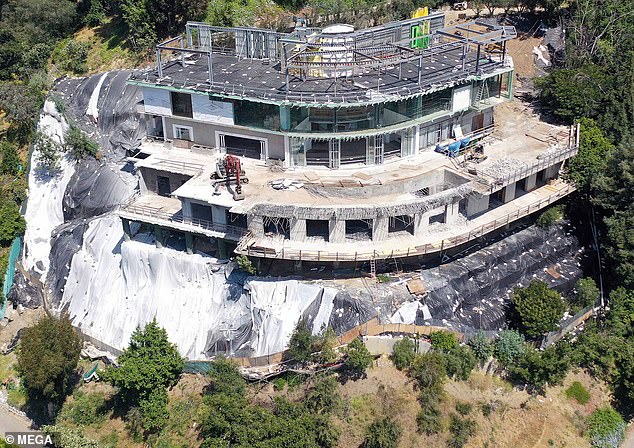 A judge has ordered Hadid to tear down the ‘mega mansion’ he is building in L.A. because is dangerous

‘It’s unsafe and it’s dangerous… If this house came down the hill it would take a portion of the neighborhood with it,’ Judge Karlan told the court in Santa Monica.

He noted that 71-year-old Hadid’s own structural engineer reported that piles supporting the giant home were driven only 20 feet into the bedrock, instead of the 30 feet required by building regulations.

‘This seems to me to be a clear cut case where the property must come down,’ he said.

‘We’re not talking about an extra wall or a different way into he kitchen. We’re talking about the most significant aspect of the structure – the foundation.’

Wilson, who has a 30-year resume of dealing with ‘distressed’ properties worth a total of $15 billion in 35 states, estimated the cost of the demolition would be ‘several million dollars’, and after a 3-5 month analysis of the work to be done, the building could be torn down in about six months.

Hadid – father of supermodels Gigi and Bella Hadid – has a $17 million loan on the property, which he has personally guaranteed.

Michael Fazio, attorney for First Credit Bank, estimated that the site, with it’s illegally built house on it, is now only worth about $8 million. 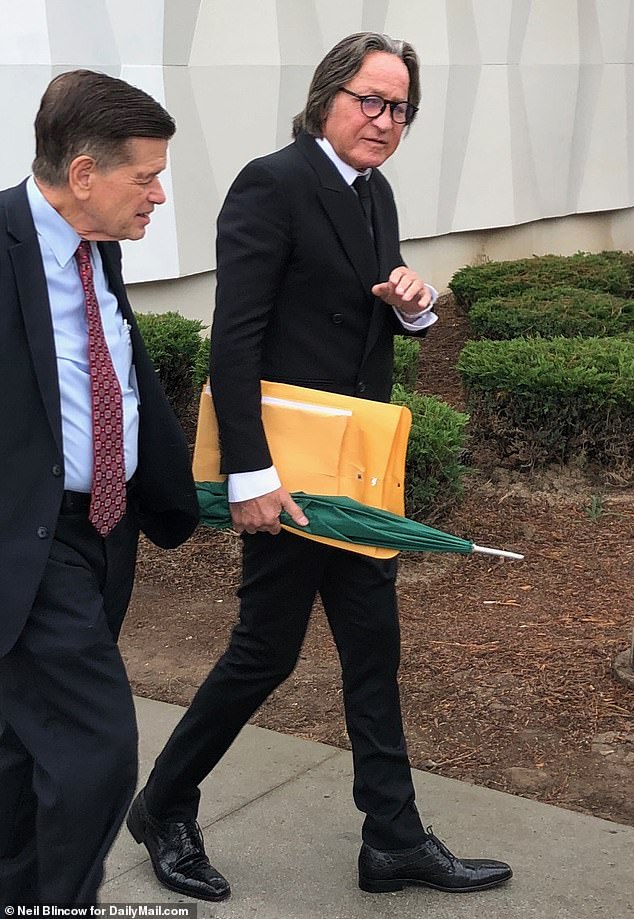 Hadid’s controversial Los Angeles mega-mansion is a ‘clear and present danger’ to nearby homes and ‘must come down,’ a judge declared. He is shown leaving court on November 20 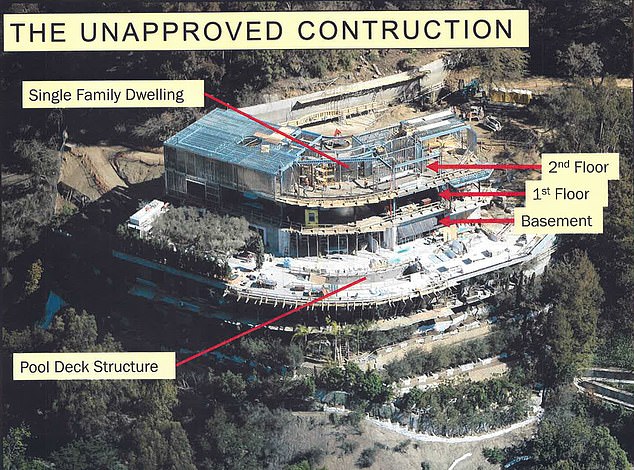 Neighbors have been fighting for years for the demolition of the property because of all the alleged unapproved construction. The development of the home has also been an eyesore to nearby residents

But after Hadid’s attorney claimed the property developer was broke, Ariel Neuman, attorney for the neighbors said: ‘It’s amazing to me because he (Hadid) just bought a multi-million dollar home in Beverly Hills.

Earlier this month Judge Karlan visited the construction site to see first hand progress on the removal of the home’s illegally-built third floor and pool deck, a partial demolition he had ordered to make the building safer and bring it into line with local planning regulations.

The civil case before Judge Karlan is running parallel with a criminal case in which Hadid has already pleaded no contest to illegal construction and is serving three years probation on condition he bring the house into compliance with building regulations – or tear it down – within that time.

Earlier this month LA city prosecutors filed a motion in the criminal case calling for the massive home – dubbed the ‘Starship Enterprise’ because it’s so huge – to be completely demolished by April 1 next year.

The judge in the criminal case, Judge Neetu Badhan-Smith, scheduled a hearing for December 13 to rule on the motion.