Molly’s Game proves too long, too wordy and too complex

A new movie year kicks off tomorrow with the release of Molly’s Game, a film that has already garnered a Golden Globe nomination for its flame-haired star, Jessica Chastain, and has an outside chance of repeating the achievement when the Oscar nominations are unveiled later in January. So, we all ought to be rushing out to see it, right?

Well… if you’re a big Chastain fan, know the technical ins and outs of high-stakes poker and are in the mood for a really long film, by all means rush to see it. And enjoy. But if you can’t tick all three of those boxes, Molly’s Game is a tougher call.

I mean, I love Chastain but certainly don’t know my ‘blinds’ from my ‘flops’ and was beginning to get restless as the clock ticked past the 90-minute mark. 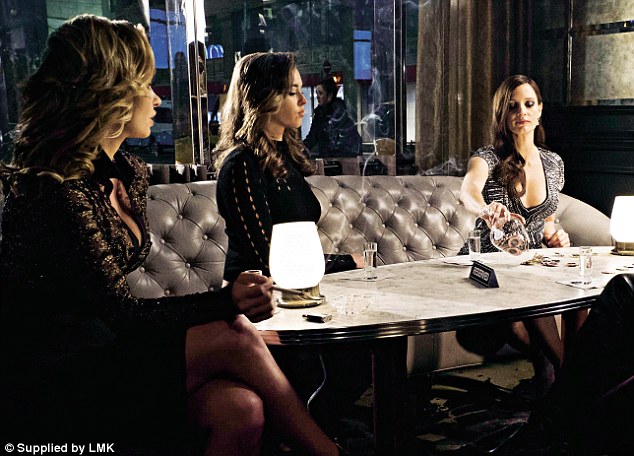 A new movie year kicks off tomorrow with the release of Molly’s Game, a film that has already garnered a Golden Globe nomination for its flame-haired star, Jessica Chastain (above right)

And there were still 50 minutes to go, during which my initial enthusiasm for this glossy-looking offering certainly withered if didn’t quite die.

And for that I blame Aaron Sorkin, who won huge acclaim as the creator and writer of The West Wing television series, went on to write the screenplays for The Social Network and Moneyball and who, crucially, makes his directorial debut here as well as writing the screenplay. Which means, in short, there is no one who can turn round and say: ‘Aaron, there are just too many words!’

Because that’s the main problem with Molly’s Game, which, like so many other films these days, is plucked from real life. 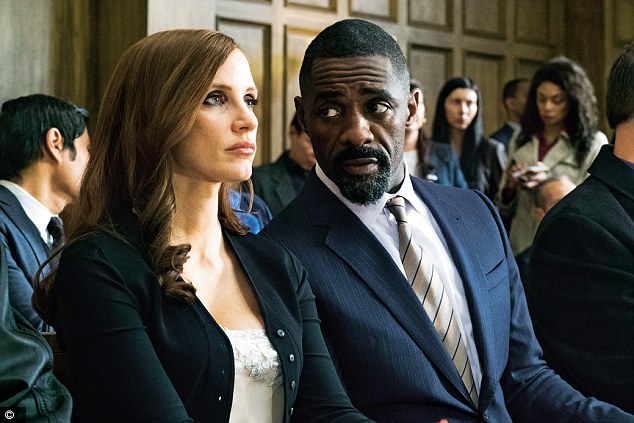 If you like Chastain, know the ins and outs of poker and are in the mood for a really long film, by all means rush to see it. If not, Molly’s Game is a tougher call (above Chastain with Idris Elba)

Yes, it’s whip-smart (occasionally too clever for its own good) and super-slick in a way that reminded me of American Hustle, The Big Short and The Wolf Of Wall Street, but, boy, are there a lot of words.

It’s not so much the normal screen dialogue I’m complaining about as the endless voiced-over narration, delivered by Chastain, that begins with the horrible skiing accident that forced Molly Bloom, a one-time Olympic hopeful, to look for alternative ways of earning a living, and carries on right through, once she’s decided that running poker games is her thing, to her inevitable date with American justice.

Normally, film-making is a collaborative process, so when a writer delivers a particularly verbose screenplay there will be a director – who is higher up the film-making food chain so can do this sort of thing – to excise maybe half of them, while the actors, justifying their actions with ‘real people don’t talk like that’, then get rid of half of what remains.

The hoped-for result is a leanness, a conciseness, that Molly’s Game distinctly lacks. 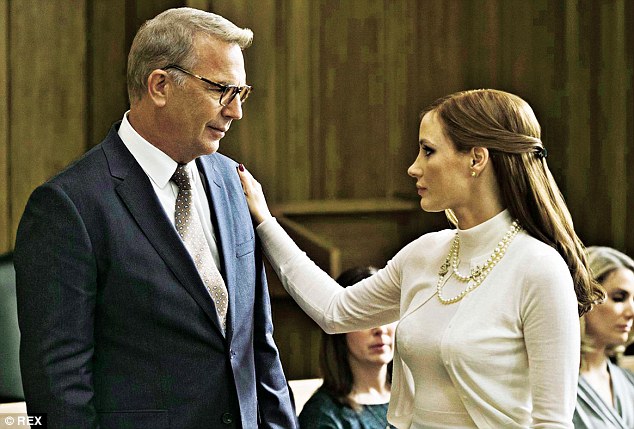 Yes, it’s whip-smart and super-slick but there are just too many words. And there’s also no doubt that Kevin Costner (above with Chastain) is royally indulged as Molly’s father

That said, others clearly disagree – in the interests of fairness I ought to point out that Golden Globe voters have rewarded Sorkin with his own nomination for the screenplay. And even I would have to admit that, amid all the good-looking stylish fun, it takes a while for its shortcomings to become clear.

When she’s initially plucked from her part-time job as a cocktail waitress to host poker nights for her boss, she knows almost as little about the game as I do. But she watches, she listens and… she looks things up on the internet.

Molly Bloom is banned from visiting Canada because she pleaded guilty to a federal crime in the US, but she was granted a 48-hour pass for the film premiere.

It helps, of course, that she’s pretty, glamorously dressed and, amid all the macho high stakes tension, a quiet voice of feminine calm.

The regular players, including the mysterious Player X – a Hollywood star whom the real-life Bloom declined to identify in her memoir on which the film is based, and who is played here by Michael Cera – are fond of her.

So, it’s no great surprise when she graduates to running games on her own behalf.

But the minute – and obviously I’m no expert, so please don’t hold me to this – she starts taking a percentage cut of the pot (or ‘rake’, as it’s called), she’s in big trouble.

Because – and it’s indicative of how complex Molly’s Game becomes that I had to look this up afterwards – she doesn’t have a gaming licence.

And we know she falls foul of the law almost from the film’s outset, as a dawn raid sees her arrested at gunpoint and in desperate need of hotshot lawyer Charlie Jaffey (Idris Elba), who’s initially reluctant to take on such a high-profile case. 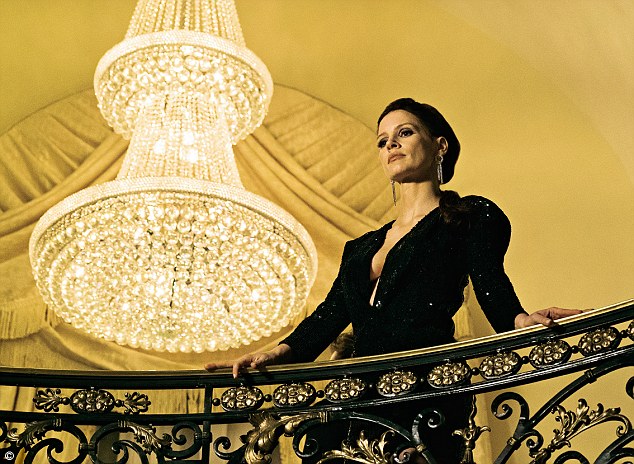 While Chastain and director Aaron Sorkin initially combine extremely well to make Molly a compelling character, I became restless around the 90-minute mark & there were still 50 to go

But we know he will, otherwise Elba wouldn’t have taken on the part. Which would have been a shame because he’s rather good.

All sorts of obstacles still lie in the way of anything resembling a happy ending – players who can’t pay their debts, drug use, and the Mafia suddenly wanting to muscle in on the action. There’s no doubt Sorkin does ensure there’s real sting in his tale.

But there’s also no doubt that Kevin Costner, who plays Molly’s pushy psychologist father, is royally indulged in an emotional scene that takes place in Central Park and stretches credibility to its very limit and beyond. Just as a running time of 140 minutes eventually did the same for my patience.