A mother-of-three from Jacksonville, Florida experienced every parent’s nightmare when she accidentally crashed her daughter’s Zoom meeting with her classmates — while completely naked.

Ashley Foret Smith says her three daughters were set up with computers in other rooms of the house on May 5 when she hopped into the shower. But little did she know that while she was in there, her youngest daughter had moved into her bedroom and started a Zoom meeting.

So when Ashley came out of the bathroom with just a towel wrapped around her head — and nothing else — she realized too late that her seven-year-old’s classmates could see her completely naked. 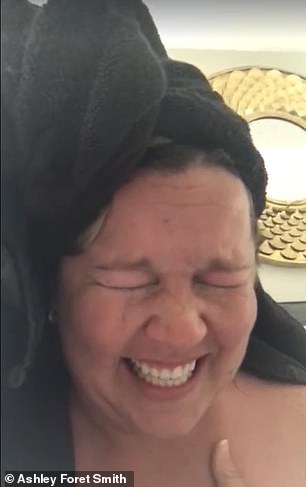 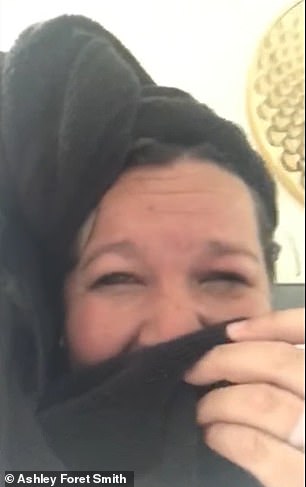 Whoops! Little did she know that while she was in there, her youngest daughter had moved into her bedroom and took a Zoom call 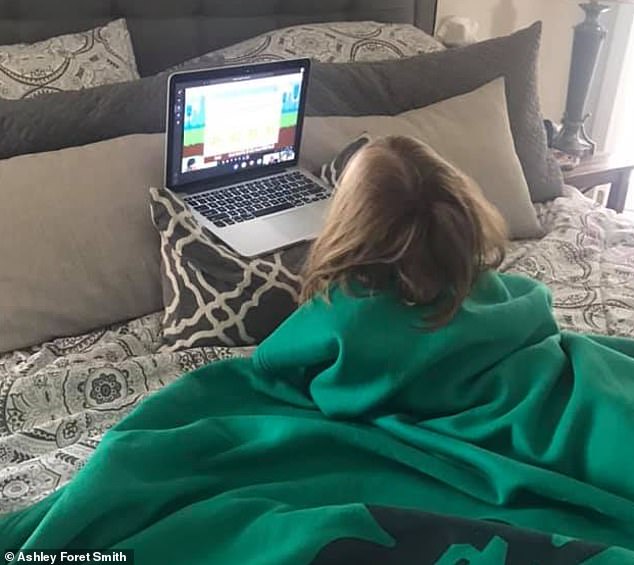 Whatcha doin’ there? When Ashley walked out of the bathroom naked, her daughter’s classmates saw her on screen

In a viral Facebook post, Ashley explained that her daughters were all set up for virtual learning that day when she went to shower in the master bathroom.

When she got out, she walked naked across her room to get her clothes heard giggles, followed by the sound  of her daughter saying ‘hang on’ and another voice saying ‘I think we need to hang up. We might all be in trouble.’

Ashely wrote: ‘I’ll tell you where they were coming from. The perfectly angled computer sitting atop a pillow on my bed.

‘While I was showering, the youngest one set up her Zoom meeting on my bed. Her computer was on my pillow, camera facing the middle of the room, she was on her stomach tucked under the covers.

‘Did I just walk neked into a zoom call? I DID!’ 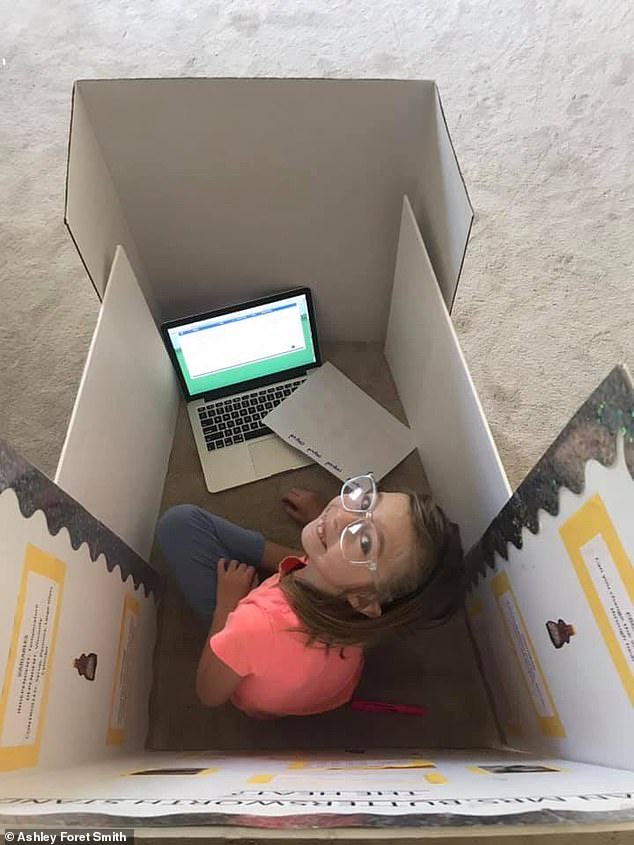 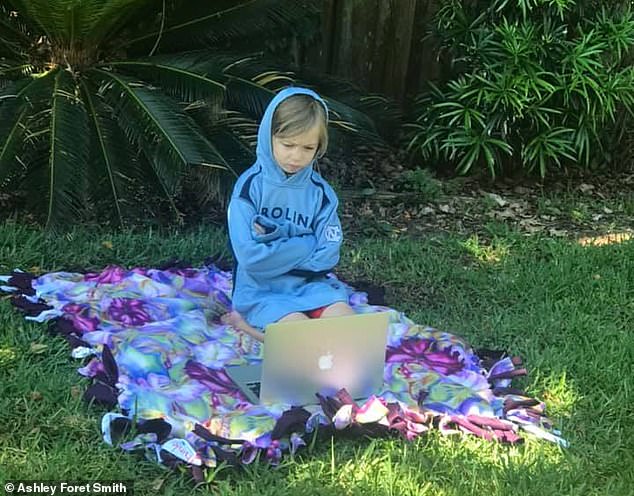 Outside! She later shared photos of her daughter’s new Zoom setups that would prevent further mishaps 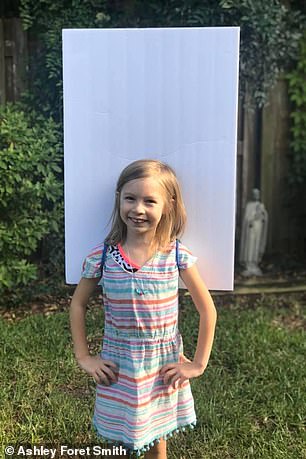 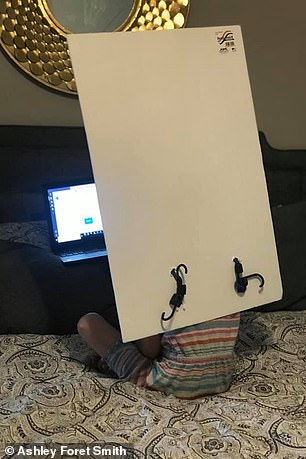 Thinking of the future: She also fastened posterboard to her daughter’s back to block out anyone in the background

Naturally, Ashley panicked — but she seems to have quickly moved past how embarrassed she was and embraced the humor of the situation.

Still wearing a towel wrapped around head, Ashley shared a video of her reaction on Facebook.

‘Guys, I watch all these videos of people on the internet and I don’t believe it. And then it just happened to me,’ she says, barely getting the words out as she laughs hysterically.

‘What do I do?’ she asked, still laughing. ‘Do I, like, write an apology note to all the parents? Or do you just pretend like it didn’t happen? Or call them all liars, that they didn’t really see it?

‘A first grade class just got a biology lesson… from me,’ she added. ‘We’re probably gonna get kicked out of school!

‘That was probably the most humiliating moment of my life,’ she said through laughter. 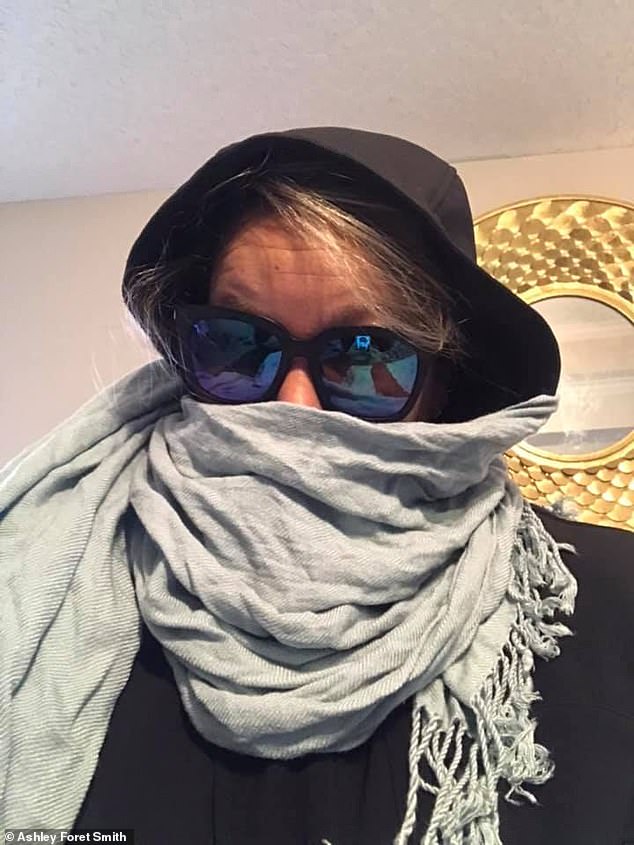 In disguise! The video has gone on to garner over 1.8 million views, with commenters chiming in to laugh with Ashley and reassure her that it could happen to anyone 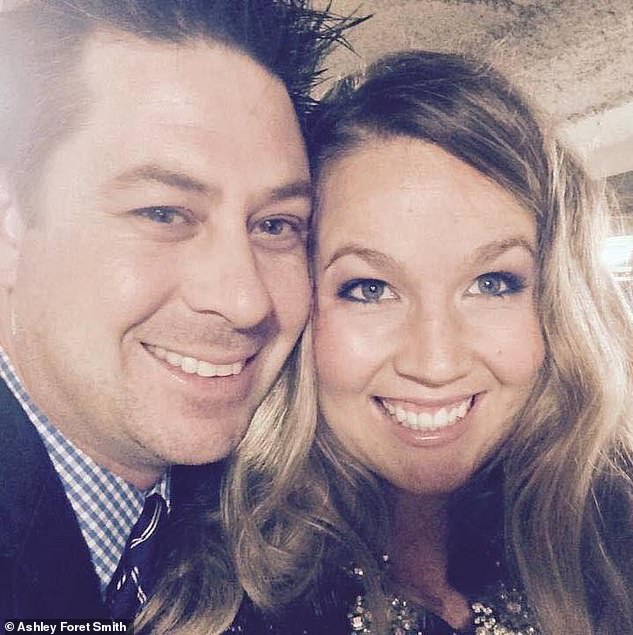 ‘May my humiliation make you giggle,’ the funny mom wrote

The video has gone on to garner over 1.8 million views, with commenters chiming in to laugh with Ashley and reassure her that it could happen to anyone.

Later, Ashley shared an ‘update’ photo album with a photo of herself in disguise, another with her seven-year-old banished to Zooming in the backyard, and several more with the little girl using her computer with a giant piece of posterboard fastened to her back to ensure no one else appeared in the shot.

‘This wasn’t in the parenting handbook,’ Ashley wrote. ‘Virtual schooling is hard. Balancing everything is hard. Not being able to exist in your own house without knowing where a zoom call might pop up is HARD.

‘Whether you have children at home on school calls, a significant other on work calls, or you are on work calls yourself, this is the REALITY of the times we are living in. I am sure that everyone has been a little more cautious [since watching my video].

‘May my humiliation make you giggle,’ she added.