A 20-year-old young woman from Clearwater, Florida who kept her nipple piercings secret from her mother was horrified to reveal her body jewelry in the most unexpected way.

Sydney Allen got both breasts embellished with barbells as a birthday gift from her sister in June but the jig was up just four months later when she visited her doctor with her parent in tow.

Allen may not have expected to have an X-ray Tuesday as she attended for a routine check-up but when a medical expert wanted to look at the alignment of her spine due to her risk of fluid building up in the area, she was shocked the metal revealed all.

Sydney Allen, 20, got both barbell piercings in June but was found out when the Clearwater, Florida women looked at a scan for her syringomyelia condition that causes fluid-filled cysts

‘My mom saw my piercings as soon as the X-ray popped up and the doctor and I started laughing hysterically,’ Allen tweeted about the incident.

But it turns out her giggles were of the nervous kind as she explained her mother is ‘a bit conservative on appearances and hates tattoos and piercings’.

Ordinary patients are asked to remove jewelry before an X-ray but for freshly-pierced Allen it would have been more difficult as it usually takes six to 12 months for a piercing in the area to fully heal.

‘My mum had no idea,’ she told the Press Association. ‘She was not as happy, but kept her composure in front of the doctor, just stating ‘we’re going to have to talk about this later’.

‘Since I don’t usually have my shirt off I thought it would be a very easy secret to keep,’ she told Buzzfeed News about the incident prompted by her rare condition of syringomyelia where fluid-filled cysts can form on the spinal cord. 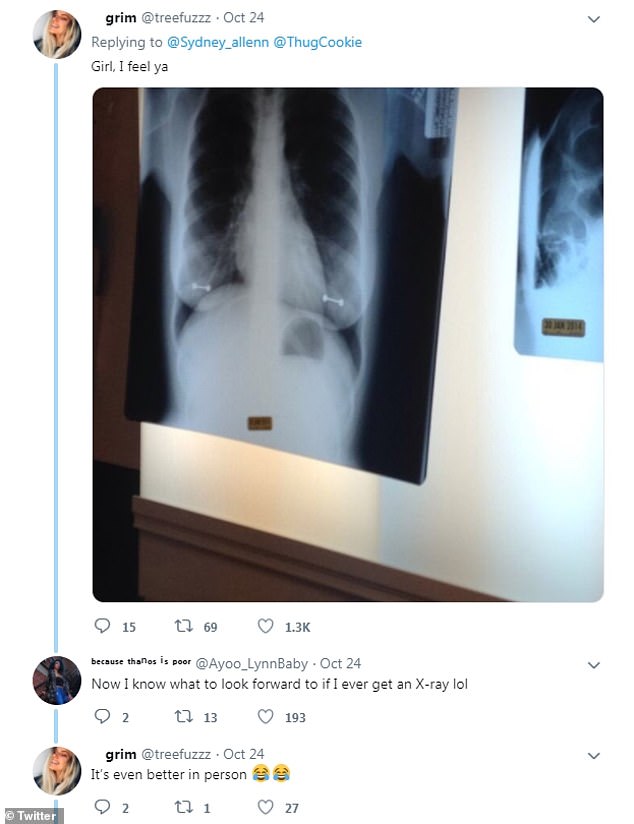 Although ‘She was visibly upset’ initially, her mom has gotten used to the idea now since the piercings are usually very visible.

‘I was initially terrified when the X-ray came up, but she ended up being pretty understanding since no one can tell unless I show them,’ she continued to Buzzfeed as her images went viral.

Even with the story becoming a social media hit, Allen’s traditional parent has managed to see the funny side.

‘The picture does make her laugh now,’ she added.

‘I guess the big lesson I learned from all of this is that you can’t keep secrets from your mom. It always finds a way to come out.’ 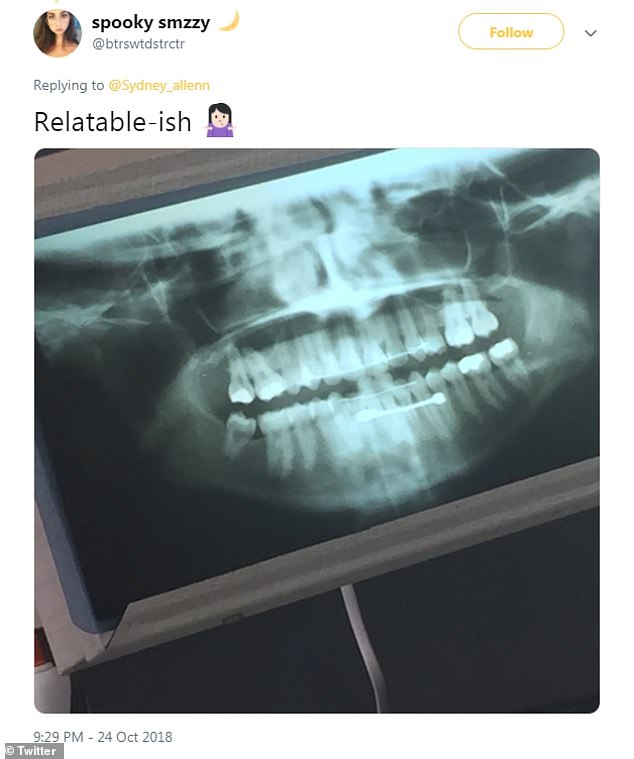 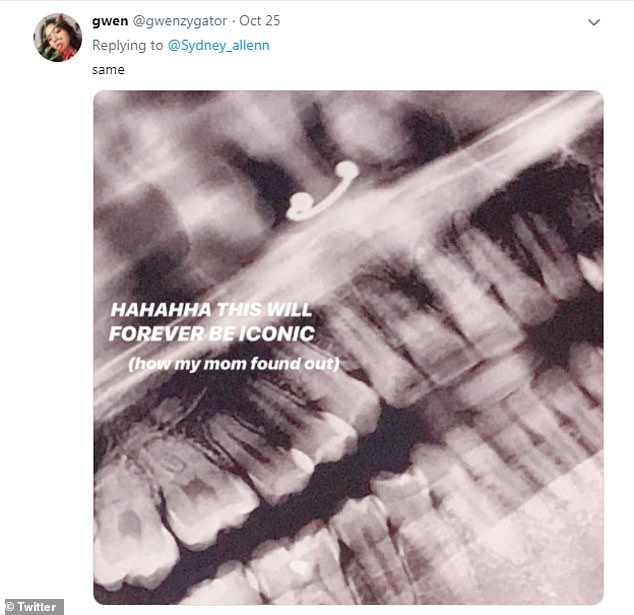 Many Twitter users have shared similar stories or fears of the same happening to them.

But most of all Allen is glad she shared the tale as it connected her to people who also suffer from the condition caused by Chiari malformation – where brain tissue extends into the spinal canal.

‘I was getting the X-ray to check the alignment of my spine,’ she told PA. ‘If my spine is aligned it helps relieve pain a bit.

‘It’s a pretty rare disease and I have never talked to anyone my age that also has it so it has been really awesome to discuss tips and doctor referrals.’