Lauren Riccotone began experiencing pain and occasional rectal bleeding in 2015, but assumed she just had hemorrhoids.

Her husband, Chris, urged her to get a colonoscopy but, on the day of the procedure, she discovered she was expecting her first child.

Thrown off by the news, the 34-year-old nurse, from Middletown, Pennsylvania, put off the examination and all her focus was placed on the pregnancy.

A colonoscopy a couple of weeks later revealed she had colorectal cancer, and it had spread to nearby lymph nodes.

She underwent surgery and six months of chemotherapy, after which she learned she was pregnant again. But just one month after giving birth to her son, doctors discovered that the cancer had spread to her lungs.

Riccotone, now 37, is cancer-free and says she is sharing her story to raise awareness of the disease among younger people so that they can learn to recognize the symptoms.

Lauren Riccotone, 37, from Middletown, Pennsylvania, was experiencing pain and occasional rectal bleeding but assumed she just had hemorrhoids. Pictured: Riccotone, right, with her husband Chris and their daughter Charlie 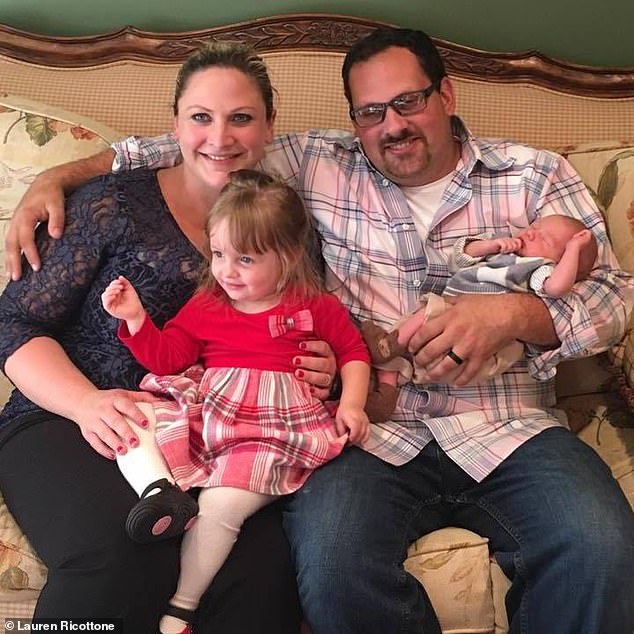 The day of her colonoscopy, Riccotone discovered she was pregnant and put off the procedure. She gave birth to her daughter in January 2016. Pictured, left to right: Riccotone, her daughter Charlie, her husband Chris and her son Michael

Riccotone originally began experiencing rectal bleeding in 2015 and had scheduled a colonoscopy.

‘I thought it was just a hemorrhoid or something I ate – I wasn’t too worried,’ she told Yahoo Lifestyle.

On the day of the procedure, medical staff performed a number of standard scans and tests including a routine pregnancy test.

Just as Riccotone was getting ready to undergo anesthesia, the results came back that she was pregnant with her first child.

She decided to put off the colonoscopy until after her pregnancy because she was still convinced the bleeding was the result of hemorrhoids.

Just two weeks later, however, the new mother was in the bathroom when she began heavily bleeding.

‘There was blood everywhere, from both my rectum and vagina,’ she told Yahoo Lifestyle. ‘I was so dizzy and weak I could barely stand.’

She called her husband, Chris, who rushed home and took his wife to the emergency room.

Riccotone was diagnosed with colitis, which is inflammation of the inner lining of the colon. She said because she had an infant daughter to nurse, she was discharged two days later as long as she had a colonoscopy scheduled.

Still expecting to learn she had hemorrhoids, she was shocked to learn she actually had stage 3B colorectal cancer.

‘Even after getting the news, I was in total shock,’ Riccotone said. ‘I didn’t cry. I was in total disbelief. I was so young, and I had no family history of colon cancer. It just didn’t seem possible. 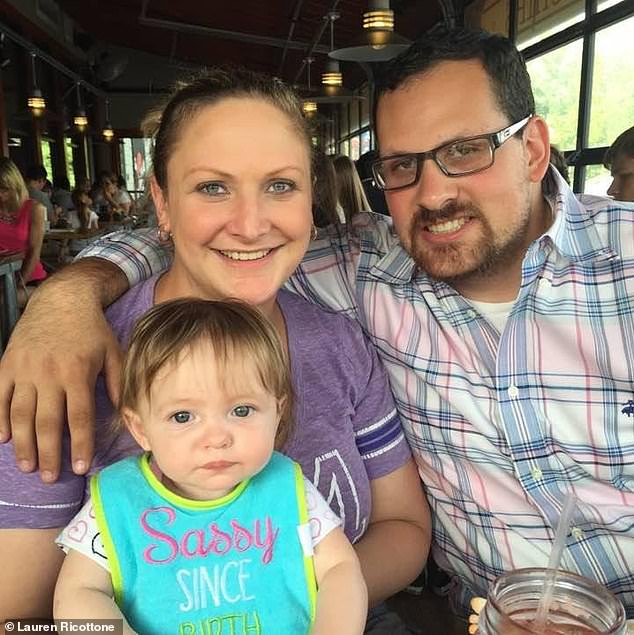 Just two weeks later, Riccotone was in the bathroom when she began heavily bleeding. A few days later, she was diagnosed with stage 3B colorectal cancer. Pictured: Riccotone with her husband Chris and daughter Charlie 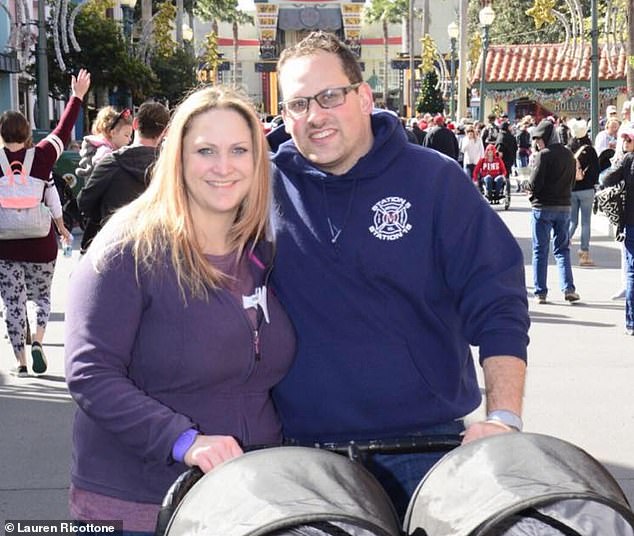 Riccotone underwent surgery and six months of chemotherapy. Just a few weeks after the treatment ended, she discovered she was pregnant again and her follow-up scans were placed on hold. Pictured: Riccotone, left, with her husband Chris

Colorectal cancer is a cancer that starts in the colon or rectum, located at the lower end of the digestive tract.

The cancer usually begins with growths called polyps. They are located on the innermost lining of the colon or rectum and become cancerous over many years.

A study published in 2017 found that colorectal cancer cases diagnosed in adults younger than age 55 doubled from 1990 to 2013, although no one is sure why.

In response, the American Cancer Society updated its screening guidelines for colorectal cancer, lowering the age that people at average risk begin regular screenings from 50 to 45.

According to the American Cancer Society, colorectal cancer is the third most common cancer diagnosed in the US, among both men and women.

It is also the third leading cause of cancer deaths in both American men and women and is estimated to cause more than 51,000 deaths in 2019.

The day after her colonoscopy, Riccotone had an appointment scheduled at Fox Chase Cancer Center in Philadelphia.

She told Yahoo Lifestyle that Dr Sanjay Reddy, a surgical oncologist at Fox Chase, told her that had she waited any longer, the results could have been fatal.

‘The tumor was so large that Dr Reddy told me it would have perforated my intestine within days,’ she said. 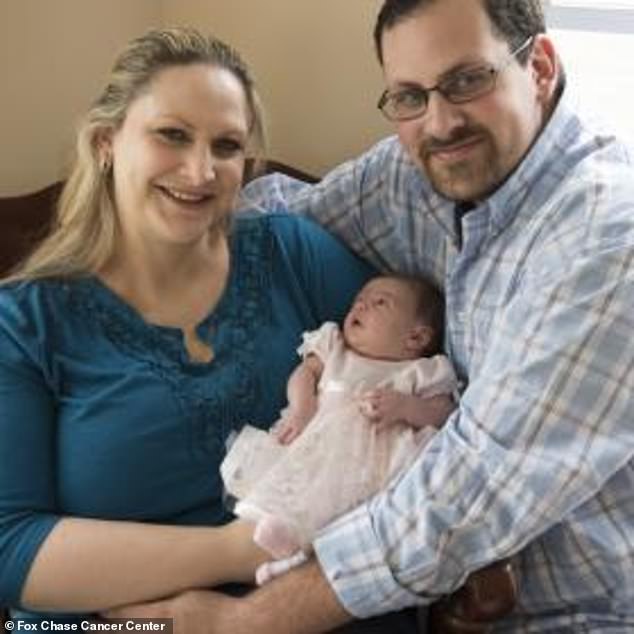 In August 2017, she gave birth to her son Michael and, one month later, scans showed that the cancer had metastasized and spread to her lungs. Pictured: Riccotone, left, with her husband Chris and her daughter Charlie 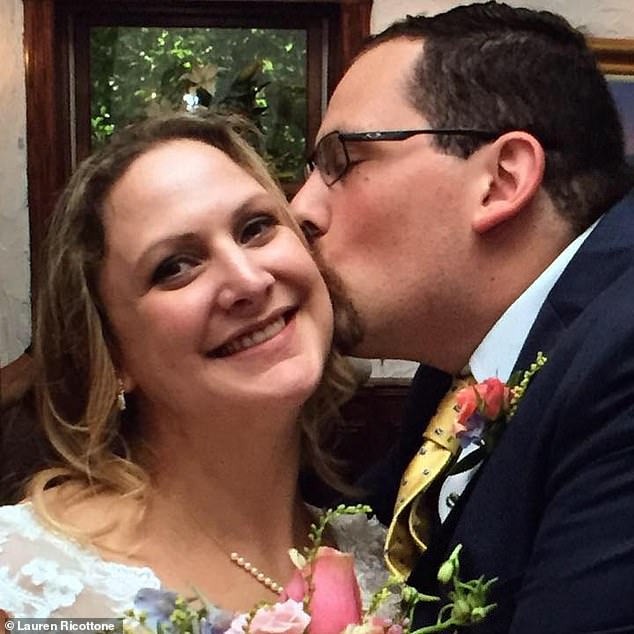 Riccotone is now cancer-free and says she wants to spread awareness of the disease among younger people. Pictured: Riccotone, left, with her husband Charlie

Dr Reddy performed surgery to remove the tumor in March 2016, which was successful. Following that, she had to undergo six months of chemotherapy.

In February 2017, Riccotone finished her final round. She was still fatigued and nauseous, but doctors told her it was just the residual effects of her chemotherapy treatment.

However, after visiting the ER for a stomach bug, tests revealed she was pregnant again.

‘I hadn’t ever gotten my period back, but I had just assumed that the chemotherapy had put me into premature menopause,’ she told Yahoo Lifestyle.

Her follow-up CT scans had to be rescheduled due to her pregnancy. The couple’s son, Michael Vincent, was born in August 2017.

One month later, scans show that the cancer had metastasized and had spread to Riccotone’s lungs.

She underwent surgery and was once again on a chemotherapy regimen.

Both her daughter and her son were unharmed by either the cancer or the chemotherapy.

Currently, Riccotone is cancer-free and hopes to raise awareness among younger adults about colorectal cancer.

‘I work in the ER of a large health system, so I deal with cancer, including cancer in younger people, every day,’ she said. ‘But a lot of people my age [don’t] recognize that it can happen to them.’