Sierra Strangfeld was thrilled when she and her husband, Lee, learned that she was pregnant with the couple’s second child.

She hadn’t been able to breastfeed her daughter, 18-month-old Porter, because the girl was born with a tongue-tie, a common condition that makes it hard for a baby’s tongue to move, and was excited by the opportunity to try breastfeeding again.

But Strangfeld, from Neilsville, Wisconsin, learned when she was 20 weeks pregnant that her unborn son had trisomy 18, a rare genetic condition that causes life-threatening birth defects and often results in stillbirth.

The Strangfeld’s son, Samuel Lee, was born two months before his scheduled due date in November and survived for just three hours, TODAY Parents reported.

It was during this short period that Strangfeld decided that she would donate breast milk to a NICU breast milk bank to help other mothers with prematurely born babies and to leave a legacy for little Samuel.

Sierra Strangfeld, from Neilsville, Wisconsin, was 20 weeks pregnant when her son was diagnosed with trisomy 18. Pictured: Strangfeld with her husband and newborn son, Samuel 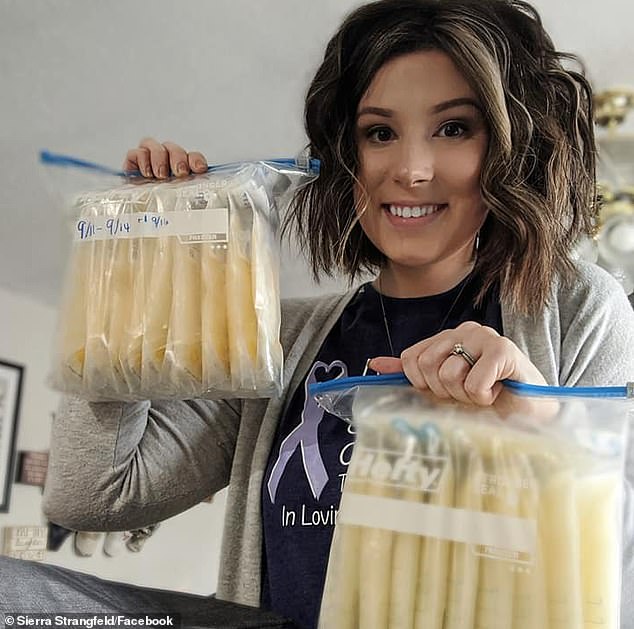 The chromosomal condition causes deformities of body parts and organs, and most survive less than 24 hours after being born. Pictured: Strangfeld with

Strangfeld told TODAY Parents that, after learning of her baby’s condition, she never thought about an abortion.

‘Termination was not an option for us – that was never a question,’ she said.

‘We wanted to meet this precious gift, and we were going to do anything we could to meet him and treat him like any baby we would be blessed with.’

Trisomy 18, also known as Edward’s Syndrome, is as chromosomal condition caused by an error in cell division. 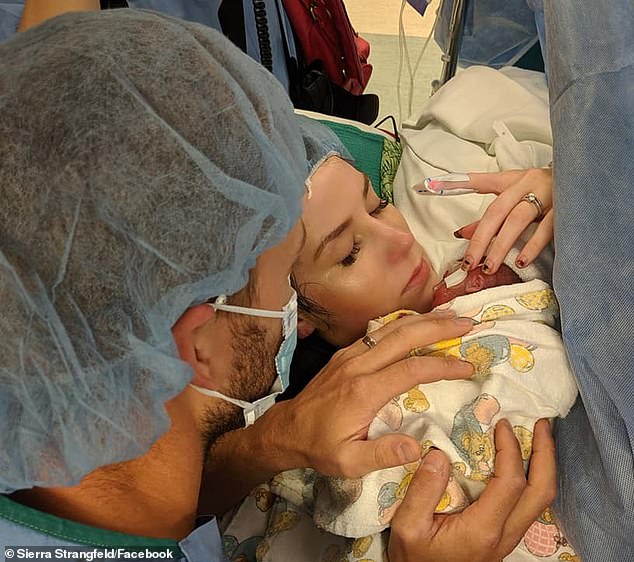 On September 5, Strangfeld was told that her son would likely to die in utero so she underwent an emergency C-section. Pictured: Strangfeld with her husband son

Babies with the condition have three copies of chromosome 18 rather than the standard two.

Many organs or body parts are deformed, resulting in features such as an abnormally shaped head or a small jaw. 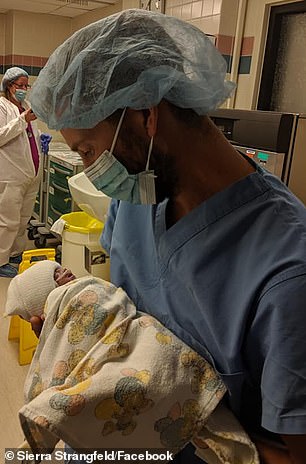 Samuel Lee was born weighing less than one pound and seven ounces and survived for three hours. Pictured: Lee Strangfeld holding his son

Trisomy 18 occurs in about an estimated one in 5,000 live-born infants, according to the National Institutes of Health.

Many affected fetuses do not survive to term but, of those who do, 75 percent survive for about 24 hours.

Just five percent live for more than a year.

In September, two months before his due date, Stangfeld learned her son would likely die in utero.

The couple decided to undergo an emergency C-section so they could spend some time with him alive.

Samuel Lee was born on September 5 weighing one pounds and seven ounces, and measuring 12.5 inches. He survived for three hours.

‘I was able to do skin-to-skin with him and his heart rate and oxygen levels immediately raised,’ Strangfeld told TODAY Parents.

‘It was like he knew he was with his mom. We got a few squeaks out of him, and spent those three hours looking at every detail of his tiny body. Those hours felt like minutes.’

In an emotional Facebook post that has more than 4,500 shares, Strangfeld said she made the decision to donate breast milk before her son passed away.

‘I couldn’t save Samuel’s life, but maybe I could save another baby’s life,’ she wrote.

‘Part of me felt it was the only thing connecting me to Samuel here on Earthside. I sure hope he’s proud of me!’ 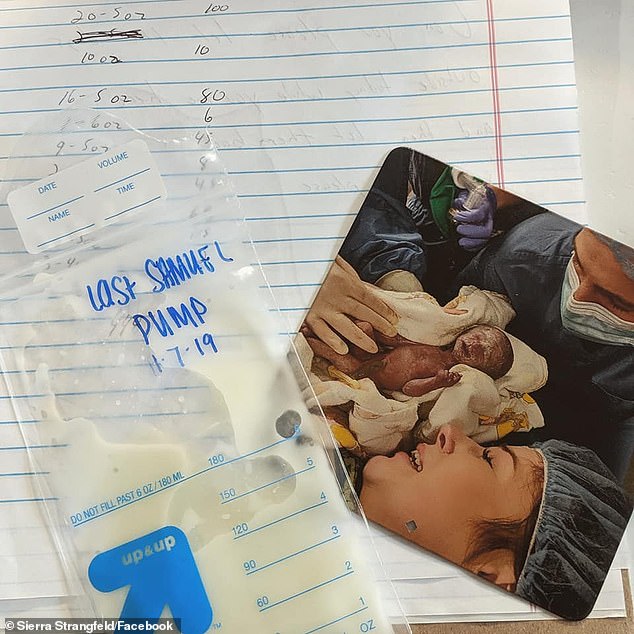 To honor his legacy, Strangfeld donated 500 ounces of breast milk to a NICU bank to help save other babies’ lives. Pictured: Strangfeld’s donated breast milk, left, and welcoming her newborn son, right

She pumped for 63 days and donated more than 500 ounces to the Mother’s Milk Bank of the Western Great Lakes.

‘It was a good feeling, knowing I was going to help someone else in need, but it was also very emotional,’ Strangfeld said.

‘I could feed a complete stranger’s baby, but I never got to feed my own.’

Strangfeld said she wants to raise awareness about Trisomy 18 and hopes to set up a foundation in the future.