A mother-of-six has taken to Facebook to remind others not to compare themselves to what they see on social media — after she witnessed another mother stage a fake pool photoshoot with her young daughter.

Jen Flint of St. Augustine, Florida wrote earlier this month that she was at the pool when a mother and daughter turned up in matching swimsuits, with the mother perfectly coiffed and busy chatting on her phone.

She watched on as the mother made her daughter pose for lots of photos, then let the little girl play by herself for a few minutes while she talked on the phone and ignored her — before finally telling the neglected youngster that it was time to leave.

Witness: Jen Flint (not pictured) was at the pool when a mom and daughter arrived in matching swimsuits, with the mother perfectly coiffed and busy chatting on her phone (stock image)

‘Yesterday while at the pool I watched a young Mama and her little daughter enter the pool area dressed in very nice coordinating swimming suits,’ she wrote.

‘The mom, with her perfect loose curls tied up in a coordinating scarf, spent the first few minutes talking loudly on her phone to a friend while her daughter stood waiting to get into the pool. 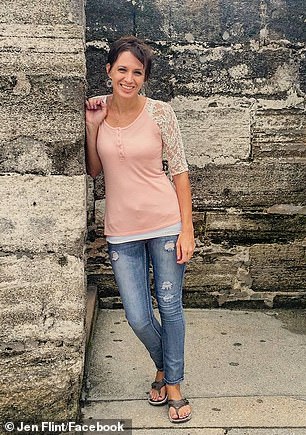 Faking it: The Florida mother-of-six said what she saw should serve as a warning to others that what they see on social media doesn’t reflect reality

‘Mom ended the phone call and proceeded to spread out pool toys and sunscreen on a matching towel. Then after finding just the right angle and the right light, Mama pulled out her tripod and took a few selfies with her daughter.

When the youngster asked to get in the pool, her mother told her to wait and took more photos, the little girl obediently smiling for the camera.

Finally, the little girl was told she could ‘play,’ and she went and swam for a couple of minutes while the mother called a friend on the phone.

‘Little One politely and repeatedly asked “Mama, can you come in the water with me, please?” She was ignored. “Mama, come play with me?” she asked 4 more times.

‘Mama glanced over at her but never got off the phone. After 10 minutes Mama ended her call, collected the sunscreen that was never applied, the water toys that never touched the water, and then her daughter and left the pool.’

Jen was shocked by what she saw.

‘I sat there thinking about what I’d witnessed for awhile afterwards. I imagined the photos she took being perfectly edited and posted to social media with a caption like “Pool time with my girly! #Makingmemories”. 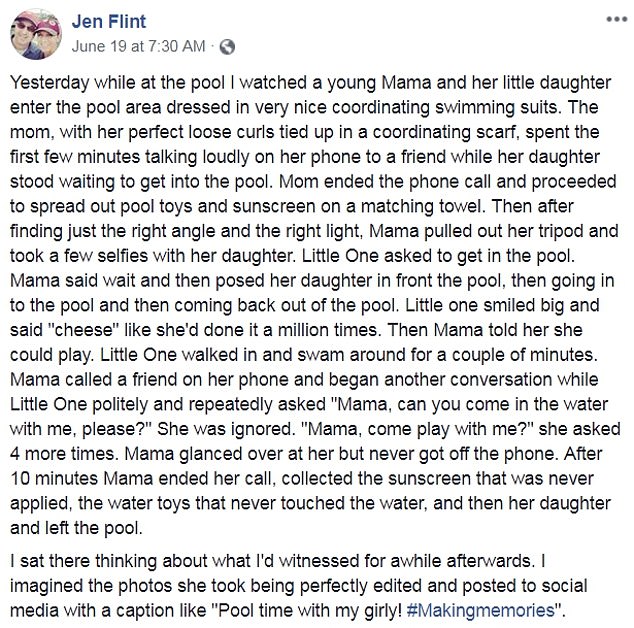 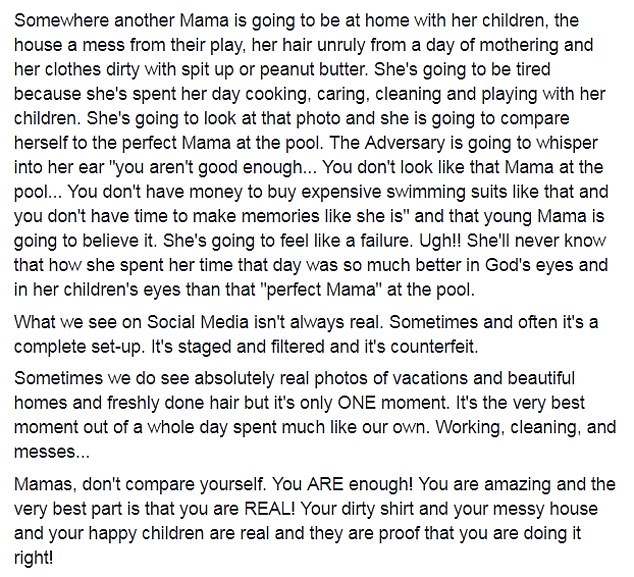 Not so fun: She said the mother took lots of pictures, then basically ignored her daughter until demanding that they leave

While she was clearly struck by the seemingly neglected child, she was equally upset about the message other mothers would get from the potential social media posts.

‘Somewhere another Mama is going to be at home with her children, the house a mess from their play, her hair unruly from a day of mothering and her clothes dirty with spit up or peanut butter.

‘She’s going to be tired because she’s spent her day cooking, caring, cleaning and playing with her children. She’s going to look at that photo and she is going to compare herself to the perfect Mama at the pool.

What we see on Social Media isn’t always real. Sometimes and often it’s a complete set-up. It’s staged and filtered and it’s counterfeit

‘The Adversary is going to whisper into her ear “you aren’t good enough… You don’t look like that Mama at the pool… You don’t have money to buy expensive swimming suits like that and you don’t have time to make memories like she is” and that young Mama is going to believe it. She’s going to feel like a failure. Ugh!!

‘She’ll never know that how she spent her time that day was so much better in God’s eyes and in her children’s eyes than that “perfect Mama” at the pool.’

She continued: ‘What we see on Social Media isn’t always real. Sometimes and often it’s a complete set-up. It’s staged and filtered and it’s counterfeit.

‘Sometimes we do see absolutely real photos of vacations and beautiful homes and freshly done hair but it’s only ONE moment. It’s the very best moment out of a whole day spent much like our own. Working, cleaning, and messes…’

She then had a plea for other mothers: Don’t compare yourselves.

‘You ARE enough! You are amazing and the very best part is that you are REAL! Your dirty shirt and your messy house and your happy children are real and they are proof that you are doing it right!’ 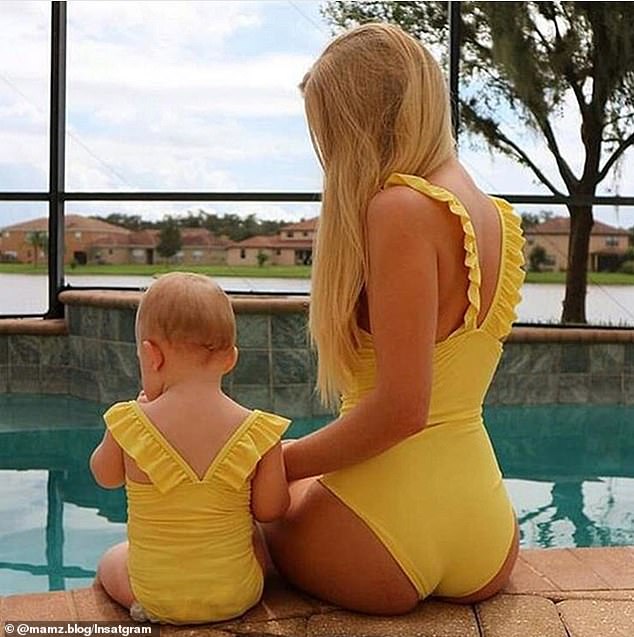 Grain of salt: Jen worried that other mothers might see the stranger’s photo and compare themselves, not knowing that it wasn’t the fun day that it appeared to be (stock image)

Since she shared the story on June 19, Jen’s post has gone viral, earning 182,000 likes and reactions and getting shared 129,000 times on Facebook.

Since it took off, Jen has posted a follow-up, clarifying that she wasn’t trying to shame the inattentive mother.

‘While I do feel like our children deserve our attention and we all do need to put our phones down and really be present with our family and friends, that was not the message I was sharing,’ she wrote

The beautiful, perfect, filtered photos that pass by our eyes as we scroll on social media are not a full depiction of real life

‘I, in no way, meant to shame or judge this pool Mama for her actions. I don’t know why she behaved the way she did and honestly I don’t care. I’m sure she had her reasons. We all do.

‘She is just a Mama doing her best too. Shaming her was also not what my post was about. I was not pointing fingers. I was not insinuating that I was better than her. I was not pinning stay-at-home moms against working moms. I was not shaming anyone for taking photos of themselves or their children.

‘C’mon y’all, preserving memories is often just as important as making them, right?! I was not shaming people for reading a book at the park while their little ones play on the swings,’ she went on.

‘The sole intent of my post and what I hope you take away from it is this… The beautiful, perfect, filtered photos that pass by our eyes as we scroll on social media are not a full depiction of real life.

‘They are staged (either for someone else’s self worth or because a company is paying for those staged photos to entice you to buy whatever it is they are selling).

‘They may also just be a beautiful photo of a child laughing, a momma having a good hair day, an exquisite meal or a tropical paradise, but they are just a glimpse of a perfect MOMENT,’ she said.

‘The ONLY take-away that I intended for you to get from my “pool post” is not to compare your whole self and your whole life to one perfect moment that you see on social media.

‘Don’t feel less than enough because what you see on a screen looks “better” than your real life.

‘The scene that I saw at the pool was the opposite of what I would have imagined had happened had I just scrolled social media and saw her beautiful photo. That is the point,’ she went on.

‘Don’t compare yourself or your situation to anyone else’s. Comparison is the thief of joy, y’all!’