Mom has gender reveal party for son, 17, after ‘getting it wrong’

An Akron Ohio couple threw a gender reveal party for their son this month — just ahead of his senior year of high school.

Grey Schoolcraft’s party wasn’t that of a typical 17-year-old, but his parents, Love and Brandon Gwaltney, say they were making up for making a mistake first time around.

‘We wanted to announce that we got it wrong 17 years ago when we told the world we were having a little girl, and named that child McKenzie,’ Grey’s mom, Love, wrote on Facebook earlier this month. ‘So we’d like to introduce you to our SON: Grey.’ 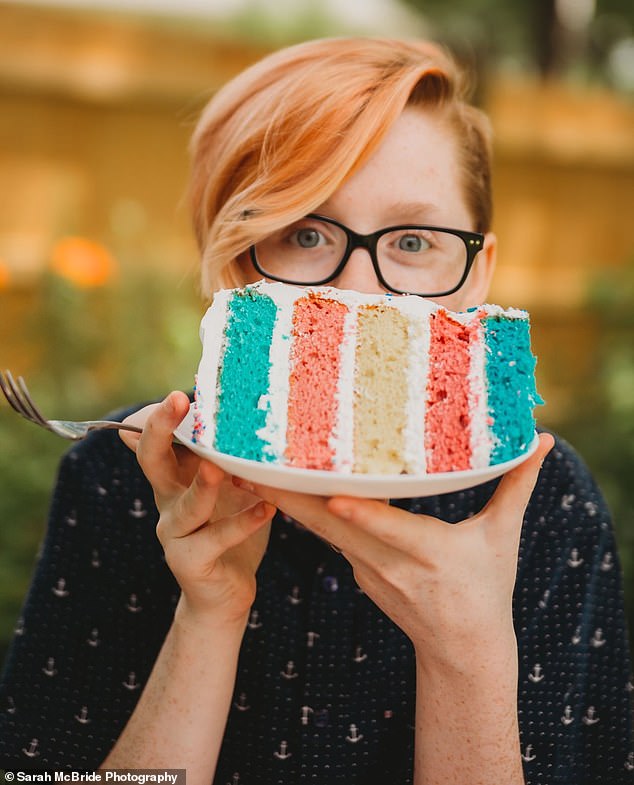 Lookin’ good, baby! Grey, who is nonbinary but uses he/him pronouns has a cake with the transgender pride flag inside for the special occasion

He said that his gender identity journey took a long time, but when he came out to his mom and stepdad just a couple of months ago, it was ‘refreshing’ for Grey to find that they were very supportive.

‘You’ve been going by one name all your life and to suddenly go by a new name, especially when your parents call you by it, it’s weird and has to register in your brain,’ he told CNN. But it’s definitely 100 per cent worth it and I’m glad we had (the reveal party).’

They were so supportive that they threw the gender reveal party in their yard, and hired Sarah Bride Photography to capture the joyous occasion.

‘The more we talked about it the more excited he got,’ Love, 35, told Today. 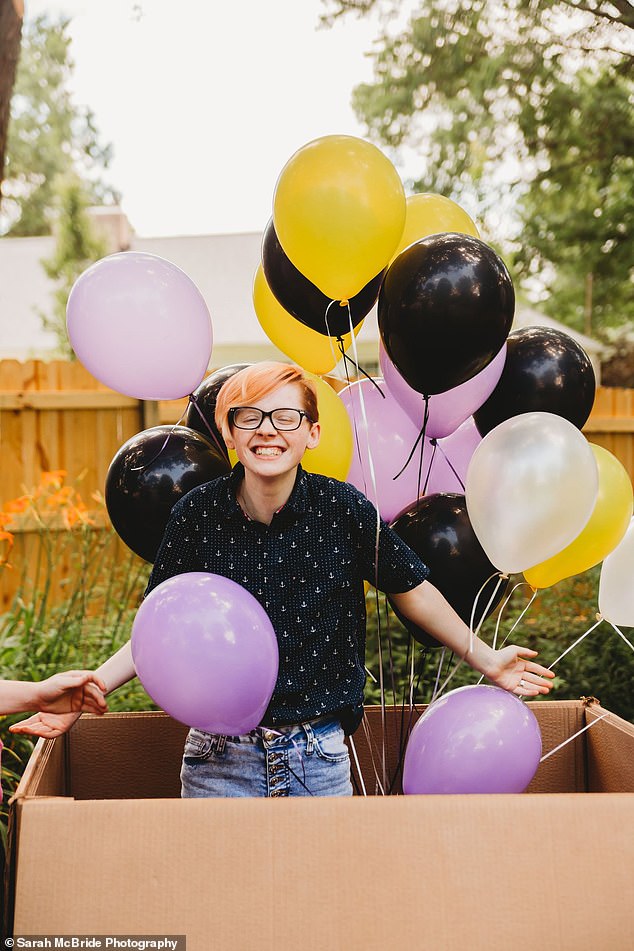 Family: He said that his gender identity journey took a look time, but when he came out to his mom and stepdad just a couple of months ago, they were very supportive 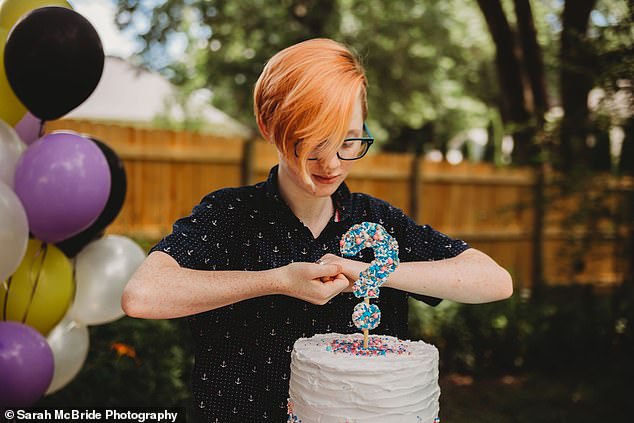 Celebrate! There were balloons, too, but in purple, yellow, black, and white — the colors of the nonbinary pride flag

There were balloons, too, but in purple, yellow, black, and white — the colors of the nonbinary pride flag.

‘I wanted the transgender flag in there because I still feel that going from whatever you are originally to nonbinary is also a transition and it doesn’t just have to be straight female to male,’ he told CNN.

Grey, who helped plan the party himself, also included the transgender pride flag in his cake design.

The pictures were shared online with a loving message from his mom.

‘The first thing we wonder about when we get pregnant (after all the holy crap! I’m pregnant) is, is it a boy or girl,’ she wrote. 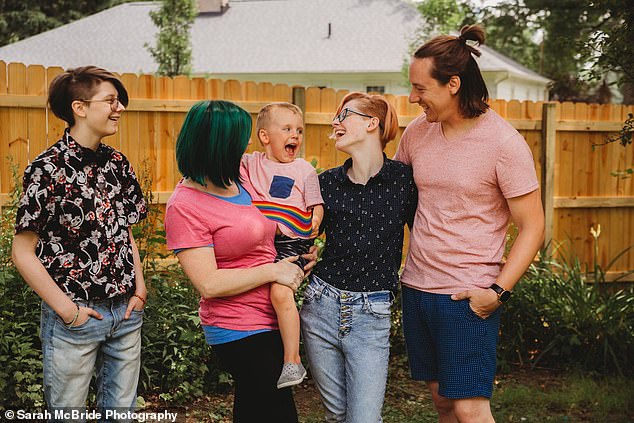 ‘We wanted to announce that we got it wrong 17 years ago when we told the world we were having a little girl, and named that child McKenzie,’ Grey’s mom said on Facebook

‘We get so excited, picking out clothes and nursery decor based on the sex of our babies. We throw parties, and pick out names. We assign attributes (like strength or beauty) based on what our child has growing between their legs. And MOST of the time, that works out perfectly fine.

‘But sometimes, we force these expected characteristics based off biological sex, and *gasp* we’ve gotten it wrong. Normally, it’s just off, but other times, that child you labeled a girl, doesn’t actually feel like a girl.

‘Sometimes that child disassociates who they are with the body they possess, and it can come across as body dysmorphia or self-esteem issues and that’s as far as it goes (to your knowledge).

‘Other times, that child grows up feeling like a completely different person, and if you’re really lucky, they open up and tell you the truth, no matter how scary or daunting that could be.’

So now, they are embracing Grey as a boy. 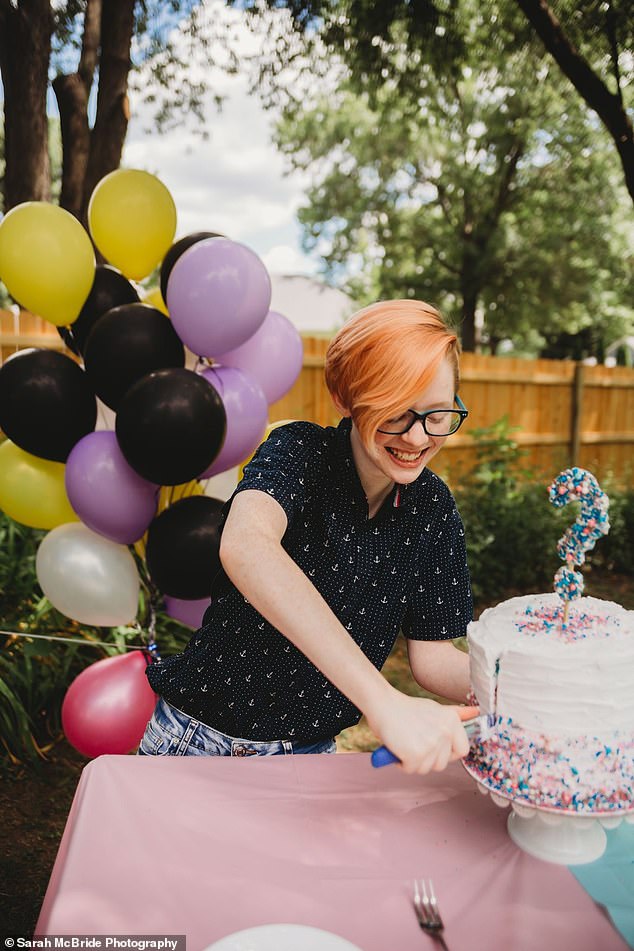 Spreading love: Photos of the gender reveal have earned widespread attention, with tons of positive feedback and well-wishes

‘He’s much like any other 17 year old nerdy boy, stays up way to late gaming, hates showering, and eats too much junk food.

‘We will be referring to Grey with he/him pronouns from here on out, but he told us to tell you that he also doesn’t mind if you use they/them,’ she said.

Photos of the gender reveal have earned widespread attention, with tons of positive feedback and well-wishes.

‘A lot of people have been reaching out to me through messenger telling me their own stories of coming out to their family,’ Love said. ‘I’ve even had people ask me for advice, saying, “I think my child might be nonbinary or transgender. How did you know?” Those kinds of questions.’

Her advice to other parents is to have an open mind and support their kids no matter what.