A single mother in Florida was left fuming after her son was sent home from daycare with a message scrawled on his stomach in dark green marker.

Heather Chisum, a-mother-of-two, uncovered the writing while changing her son’s nappy at the end of a long day at work.

It read: ‘Mum I’m out of diapers please read my report.’ The young mum was left furious at the passive aggressive note and posted her outrage publicly on Facebook. 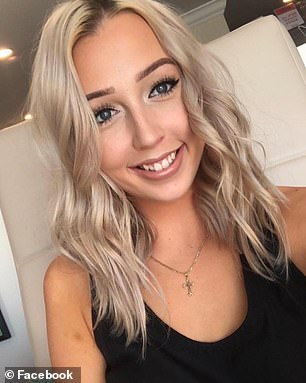 Heather Chisum, a-mother-of-two, was furious that when changing her son’s nappy at the end of a long day at work she found the green writing

She explained how the daycare put daily reports in both of her children’s lunchboxes to update her on their behavior, their nappy change times and if more supplies were needed.

Ms Chisum said she must have missed a note from the previous day.

However, she questioned if it was necessary for the daycare to write such a scrawling message on her son’s belly given she saw them at pick-up and drop-off each day. 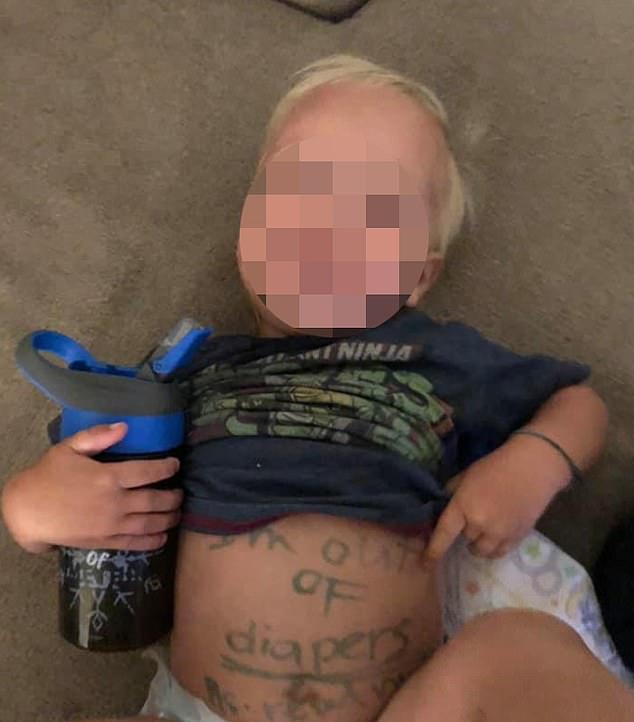 She said a simple word would have sufficed – instead of the hard-to-remove writing on her son’s body.

‘I’ve scrubbed it with several baby wipes and it’s not coming off. I had plans to take them to the beach to play, and now I can’t because my son has writing all over him.

‘I’m a single mum with a full time job and two very young children. SUE ME FOR NOT READING THE REPORT EVERY SINGLE DAY.’

Heather, said if the teachers were adamant a note was the way to go, she queried whether it was necessary to do this on his skin, as opposed to his nappy.

And, the Florida woman said it was not the first time they had done it, as she turned to the public for support.

‘I need opinions. Am I right to be furious about this? Or am I overreacting?

‘I really need your opinions guys, because I’m about to barge in this daycare tomorrow morning and have some words.’ 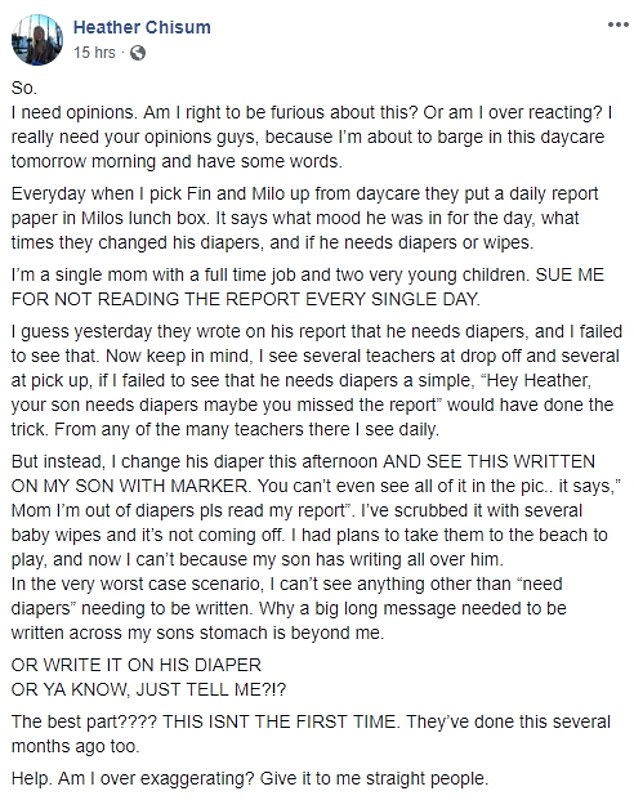 The woman has received overwhelming support online with most saying her fury was not unwarranted.

‘By no means are you over reacting,’ writes one woman online. ‘Any daycare usually always keeps extra diapers, you missed one day of not bringing diapers and it should not be a big deal.

‘I would do more than just posting this on Facebook, because this is not okay. That poor precious babe,’ she added.

Another urged Ms Chisum to report the daycare centre.

‘Honestly, I would contact DCF, they take complaints on childcare centers. At the very least, you should tell the daycare that they need to figure out better ways to communicate because there is no reason for them to be marking your child like that. I’m furious for you.’