Mom makes edible crayons from cabbage, rice and apples to get kids to eat healthy food

Getting children to eat their vegetables is a thankless chore for most parents.

But kids might be tempted to chow down on crayons made entirely from vegetables and rice.

A Japanese mom launched her edible crayon business when she noticed her infant daughter kept putting her toys in her mouth.

Not only are ‘Vegetable Crayons’ safe to eat, they’re eco-friendly—deriving their color from cabbage leaves, apple peels, blackcurrants and other disused produce.

And instead of wax, the crayons themselves are made from the rice byproducts created when brown rice is milled to make it white.

Japanese designer Naoko Kimura has launched a Kickstarter for her 100 percent edible Vegetable Crayons, made from rice byproducts and discarded fruits and vegetables

Naoko Kimura, a designer in Japan’s northernmost Aomori Prefecture, came up with the idea after observing her young daughter’s oral fixation.

Though non-toxic, wax crayons can give a kid an upset stomach.

And a 2018 report from the U.S. Public Interest Research Group found asbestos in some brands.

‘Whenever children take an interest in something, they put it in their mouth,’ Kimura said. ‘So why do crayons, something so close to most children, not seem all that safe?’ 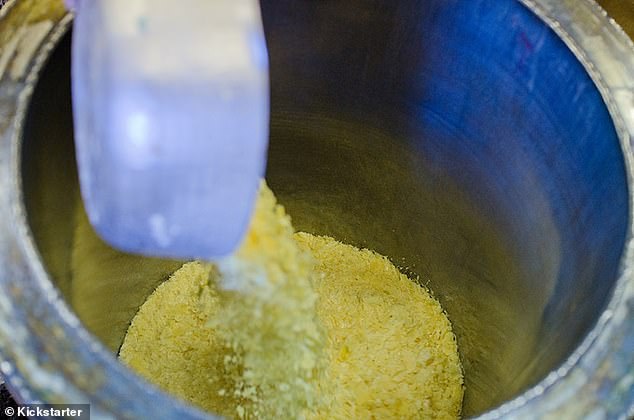 Instead of paraffin, the crayons are made from rice bran oil and wax (pictured), byproducts of the rice polishing process 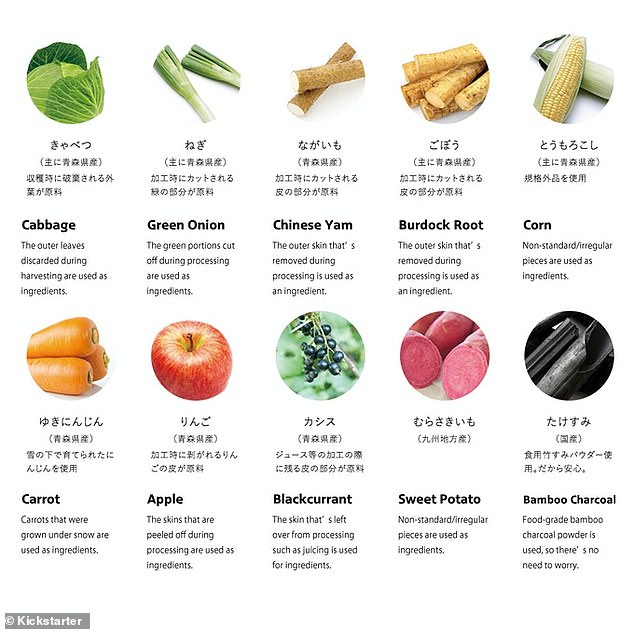 A chart indicating which produce is used in Vegetable Crayons and how they’re acquired, including residue left over from squeezing blackcurrant juice, irregular pieces of corn and and apple skins peeled off while making dried fruit chips

She began development on Vegetable Crayons in 2013 and the first pack went on sale the following year.

Now she’s working on going big through her company, Mizuiro Inc: This month she launched a Kickstarter that’s reached about $4,000 of its $9,283 goal.

While her initial concern was safety, Kimura realized there was an opportunity to be more environmentally friendly, too: Her crayons are made from rice bran wax and oil, byproducts of the rice polishing process.

The coloring come from fruits and vegetables, mostly ‘odd lots’ that don’t make the grocery shelf or that are discarded during production—like apple skins from apple chips, the outer leaves of cabbage, and the squeezed residue of blackcurrant juice (cassis). 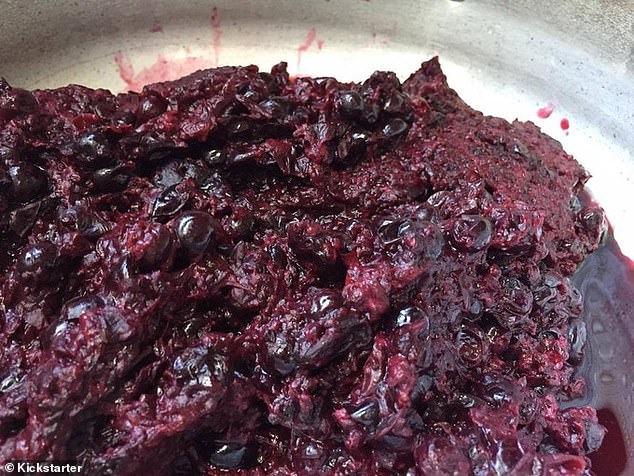 The coloring come from discarded fruits and vegetables—like apple skins from apple chips, the outer leaves of cabbage, and the squeezed residue of blackcurrant juice (pictured) 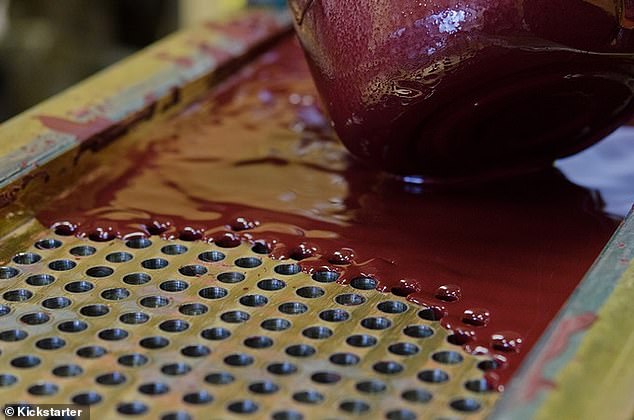 She also snuck in messaging about nutrition by naming the crayons after the veggies that color them—’Cabbage’ instead of green and ‘Cassis’ instead of ‘purple.’

‘Every child has their favorite (and not so favorite) fruits and vegetables,’ she says on her Kickstarter.

‘Through touching and interacting with these colors as they draw, perhaps they’ll be inspired to feel more of an affinity for the veggies they dislike.’

No fragrances were added to the Vegetable Crayons, though some do smell a bit like the veggies they’re made from.

‘Try picking up a pack of Vegetable Crayons and drawing a big picture with the Green Onion color,’ Kimura said. 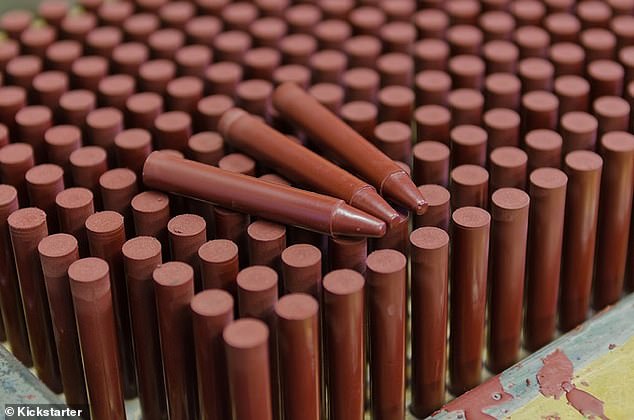 No fragrances were added, though some crayons do smell a bit like the fruits or veggies they’re made from. Pictured: Vegetable Crayons’ cassis crayon before the wrapper is added 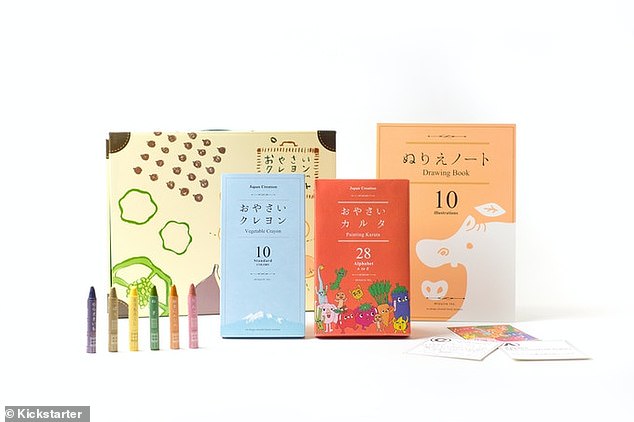 ‘You might detect that faint, yet unmistakable green onion aroma as you do. With the rough feel of the crayon on paper, you may feel like you’re interacting with the soil and veggies themselves.’

A box of 10 Vegetable Crayons costs a little under $20 plus shipping, but if you kick in more to the crowdfunding campaign there is bonus swag including postcards, drawing books, and a special carrying case.

Mizuiro does have some competition stateside: After years of Marines being teased as being so dumb they eat crayons, a leatherneck baker cooked up some edible crayons made from chocolate and wafers.

You can’t draw with them but Tashina Coronel, owner of Okashi Sweets, told Military Times her ‘Marine Corps’ edible crayons have ‘spread like wildfire!’ 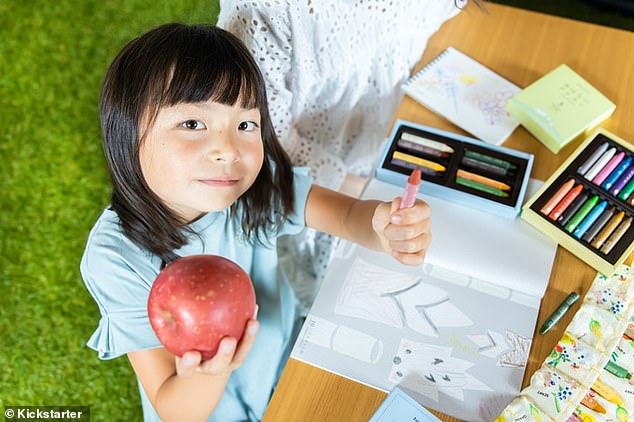 ‘The crayons started as an inside joke between services,’ said Coronel, an ex-Marine. ‘It was actually a jab at Marines from other services, trying to make fun of us. But as Marines, we can laugh along with them and own it as our own.’

Crayola hasn’t rolled out tasty crayons just yet, but the company did recently release a 24-pack of crayons, pencils and markers representing a diverse range of skin tones.

The names are printed on the crayons in English, Spanish, and French.