A young mother-of-three has been separated from her breastfeeding baby girl after ICE raids on a Mississippi food plant where she had worked for four years, according to the woman’s devastated husband.

The unidentified woman, who is originally from Mexico, is said to been removed from her family, including her four-month-old daughter, on August 7 after her arrest at Koch Foods in Morton.

Now the children’s father, who came to the US 14 years ago from Guatemala, has been left to look after the youngsters, who are all US citizens, on his own while also facing his own deportation proceedings, The Clarion Ledger reports.

He has only spoke to his wife once, on the phone, where he is reported to have told her: ‘I will take care of the children and I will find out how the lawyers could help so don’t worry. You are not alone.’

He said: ‘She was in shock because of this experience, she was traumatized.’

A young mother-of-three, not pictured, has reportedly been separated from her breastfeeding baby girl after ICE raids on a Mississippi food plant where she had worked for four years. Friends console each other while ICE raided Koch Foods plant in Morton on August 7 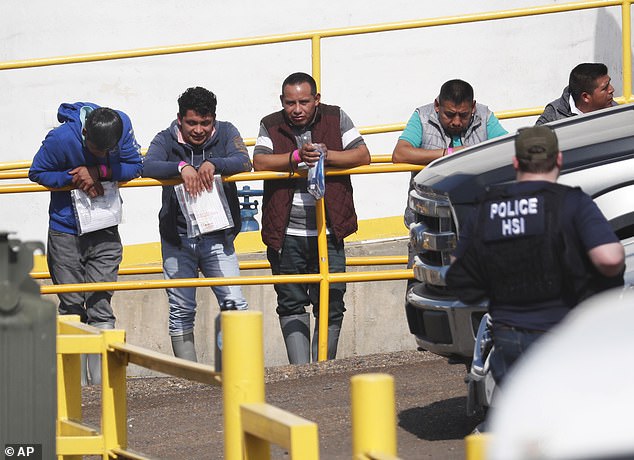 Handcuffed workers await transportation to a processing center following a raid by U.S. immigration officials at Koch Foods Inc. The unidentified woman, who is originally from Mexico, is said to been removed from her family, including her four-month-old daughter

Dalila Reynoso, an advocate with Justice For Our Neighbors, said the woman ‘had a lost look’ when she visited her. She added: ‘She hasn’t seen her children. She doesn’t know what tomorrow will bring.

‘Why do we have a mother in a detention center with a baby that’s four-months-old and who is breastfeeding?’

U.S. immigration officials raided food processing plants in the area and arrested 680 mostly Latino workers in what marks the largest workplace sting in at least a decade.

They are said to have released around 300 people – including pregnant women and those with children at home and no caretakers – handing them future court dates.

But the baby’s mother, who also has two sons aged 11 and three, is still being held at an ICE detention facility in Jena, Louisiana, according to reports.

Around 600 U.S. Immigration and Customs Enforcement agents surrounded the perimeters of the factory in Morton to prevent workers from fleeing during the raids.

Workers rounded up in that raid filled three buses – two for men and one for women – before they were taken to a military hangar to be processed for immigration violations. 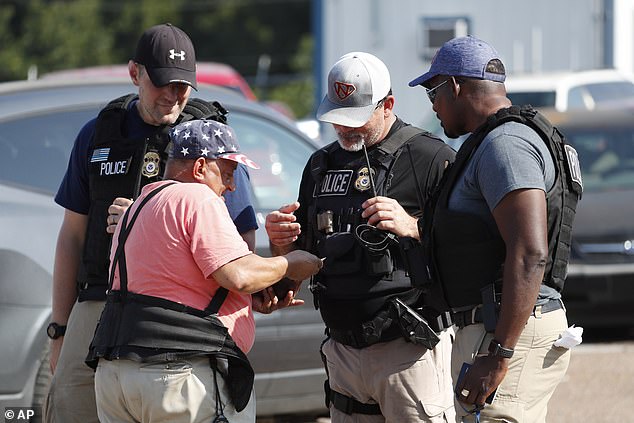 Domingo Candelaria, a registered immigrant, shows federal agents his identification as he prepares to leave the Koch Foods Inc. Koch Foods, which based in Park Ridge, Illinois, is one of the largest poultry producers in the U.S. and employs about 13,000 people

Koch Foods, which based in Park Ridge, Illinois, is one of the largest poultry producers in the U.S. and employs about 13,000 people, with operations in Mississippi, Alabama, Georgia, Illinois, Ohio and Tennessee.

An 11-year-old girl begged through tears for the release of her father after he was one of the workers arrested.

Magdalena Gomez Gregorio said: ‘Government please show some heart, let my parent be free with everybody else please.’

Some employees tried to flee on foot but were captured in the parking lot.

Workers who were confirmed to have legal status were allowed to leave the plant after having their trunks searched.