A distraught mother is suing an educational organization funded by Bill and Melinda Gates, claiming her son was left with permanent brain damage following an assault at one of the company’s schools.

The lawsuit was filed Tuesday against Green Dot Public Schools, a non-profit organization which operates 20 charter schools in California, including Animo Westside in Los Angeles where the incident occurred.

It was there, in January 2018, that the sixth-grade student was violently attacked by a classmate while in full view of a staff member.

The suit alleges that the 12-year-old boy was ‘punched in the stomach, grabbed by the neck and then strangled’ before he eventually lost consciousness.

The incident was captured on security footage, with the lawsuit claiming that the school employee not only failed to stop the assault, but also ‘failed to administer CPR and notify emergency services properly’.

A distraught mom is suing Green Dot Public Schools after her son was attacked at one of their school’s by a fellow student. Green Dot has benefited from numerous contributions from Bill and Melinda Gates’ (pictured) charitable foundation

According to papers filed in Superior Court of California, ‘approximately 20 minutes passed from the moment the boy was strangled to the time emergency services were notified’.

The boy was ‘in and out of consciousness and also exhibited signs of what seemed to be a seizure’ before an ambulance was called.

That time period may have been crucial in rendering medical assistance, as the boy now reportedly suffers permanent brain damage as a result of the attack.

The suit claims the student ‘has struggled with his academics following the assault, and has been diagnosed with several learning disabilities’ .

It also alleged that the the perpetrator of the attack had a prior history of violence towards others at the school, and that his presence at Animo Westside was a danger to ‘safety and security’. 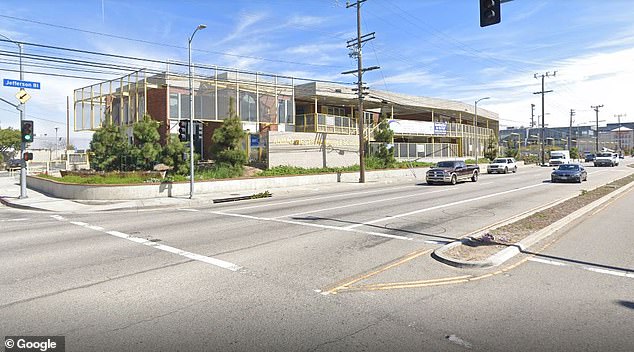 Animo Westside Middle School, where the 2018 attack took place, is pictured above 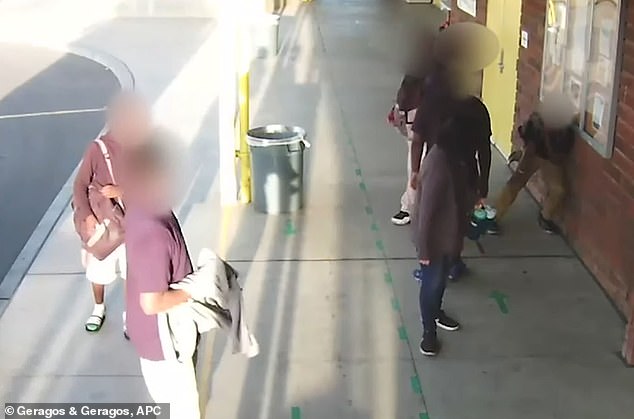 The mom of the attacked boy asked the school to expel the perpetrator, but he was not removed from the school,  according to the lawsuit.

She is seeking an unspecified amount of money in damages.

Meanwhile, she also alleges that school gave her ‘deceptively edited’ CCTV footage of the attack when she requested video of the attack.

‘The Defendant’s [Green Dot] conduct following the incident has been nothing short of atrocious and deceptive,’ the suit says.

Bill and Melinda Gates are not being sued by the mother, nor is The Gates Foundation, however it is specifically mentioned in court documents.

The suit states that ‘the Gates foundation has publicly touted Green Dot as a paradigm for school safety and efficiency’.

In separate CCTV footage, the boy is brought inside following the assault and appears to be struggling to stand upright

The student was then brought into a reception area where he is seen laying on the floor (left, in khaki pants). According to the lawsuit, it took the school 20 minutes after the attack to alert medical services

Green Dot, which was founded in 1999, has long been championed by the billionaire Gates family, who have poured millions of dollars into the organization through their charitable foundation.

Back in 2007, the Gates Foundation poured $7.8 million into Green Dot in order to establish 10 new schools in Los Angeles, including Animo Westside.

The Gates Foundation have continued to make financial contributions to the organization, making a whopping $ 22.8 million contribution in 2013.

DailyMail.com has contacted The Gates Foundation for comment on the lawsuit. 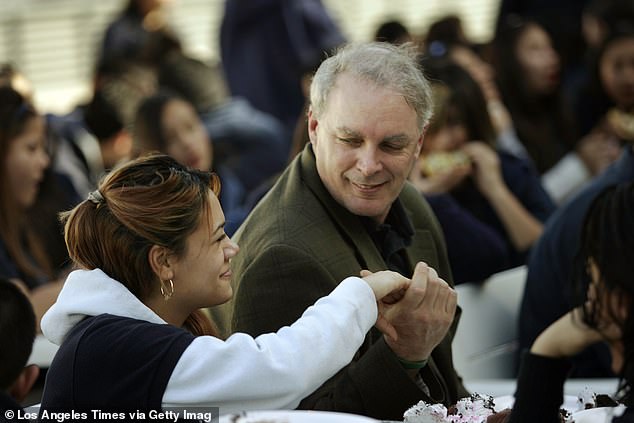 The Gates Foundation have continued to make financial contributions to the organization, making a whopping $ 22.8 million contribution in 2013. Founder Steve Barr is pictured with a Green Dot student