‘One rule for the coppers and one for the rest of us’: The moment a police officer is busted illegally driving straight through a roundabout

A police car has been busted for ignoring the road rules at a major roundabout.

The Queensland police car was filmed waiting at a lane clearly marked as left-hand turn only while attempting to enter a roundabout on the Gold Coast.

Ignoring the white lines painted on the ground, the police car displayed its right indicator and gave way to vehicles on its right.

When the coast was clear, the police car entered the roundabout and merged in front of a learner driver.

The police car did not turn left as required by the road rules and instead drove straight through, suggesting the car wanted to overtake other vehicles.

The video has been shared to YouTube by Scotts Car Cameras, as part of a compilation of ‘bad driving’ in Australia.

The dashcam owner is heard saying: ‘The coppers are doing a bloody illegal turn here’.

‘Look at this. The coppers are in a left turn only lane, it went around the roundabout twice and now they’ve just cut across illegally.

‘Good on you coppers.’ 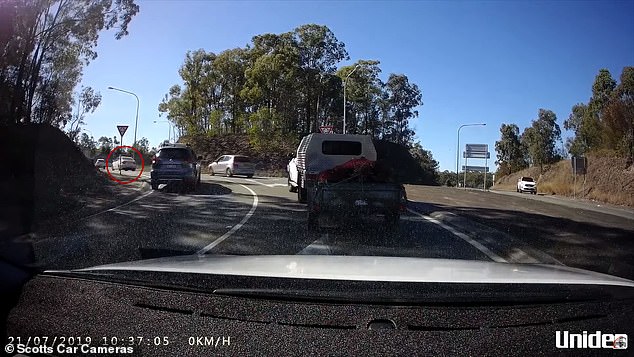 Earlier footage of the car showed it driving around a roundabout at least once before leaving the intersection.

In the comments section, the police driver was criticised for their driving conduct.

‘Right in front of a Learner driver too. Setting the right example aren’t they,’ one person said.

‘One rule for the coppers and one for the rest of us,’ another said.

According to the Queensland government’s traffic laws motorists should be in the ‘correct lane at a roundabout by looking for signs, lane markings and arrows when approaching the roundabout’.

When driving straight through a roundabout, the Queensland government said: ‘Position your vehicle in either lane unless the arrows on the road or signs indicate otherwise’. 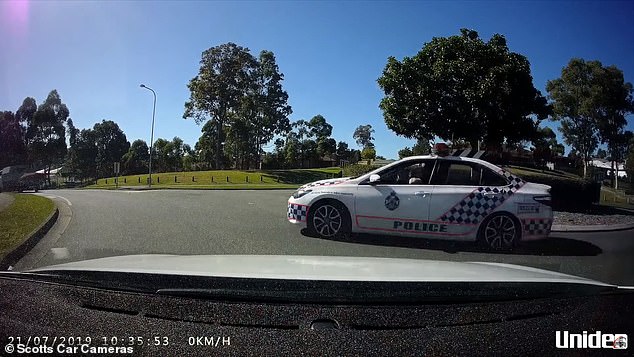