The cutest escape artist in the world regularly sends her family into a panic by escaping their home any chance she get.

As parents of 11 children Ben and Zoe Sullivan, from North Scotland, certainly have their hands full as it is, but their daughter Agnes, two, is determined to really keep them on their toes.

The daredevil toddler and the rest of the Sullivan clan feature in tonight’s episode of Me and My 10 Kids, on 5Star, where Zoe and Ben reveal how they have to watch her constantly to make sure she doesn’t get out of the house.

Agnes is described as an ‘escape artist’ by her older siblings, who have to help their parents locate her when she goes MIA

Agnes is one of the youngest of the Sullivan kids, and she loves nothing more than  giving her parents and siblings a fright.

In a tense in scene in tonight’s show, Ben is first to notice that his little one has gone missing during the family’s closely-supervised morning routine.

Once Zoe realises her daughter is not upstairs with her, both parents start to panic and look around for her.

‘Agnes, she knows how to open doors. She’s like an escape artist,’ says Charlotte, mimicking running.

‘She can escape very easily If you turn your back for, like, one second, she’s out the door, she adds. 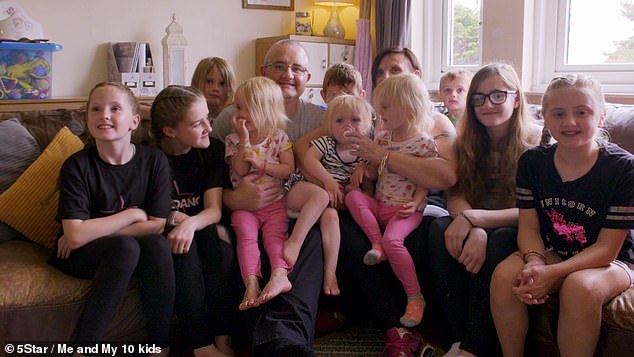 ‘She runs away a lot, Olivia says with a smile, ‘She does’t stay still, she never stays still,’ she adds.

Dad Ben explains Agnes is a ‘little ninja’ who likes to sneak out behind him whenever he goes out of the house.

‘You’ve got to have eyes at the back of your eyes, I swear sometimes,’ he says.

It turns out that Agnes has escaped the house but is quickly found wandering outside by Zoe.

But trying to keep her contained is no easy task, and Ben reveals that she can only go for naps strapped into her puschair because he knows she can’t escape it.

He affectionately says that Agnes ‘drives him nuts’ as he reveals how she’s managed to open the front door by standing on her pushchair to unlock the chain on the door.

He’s since moved it much higher to put it out of her reach.

‘If you hear that door chain rattling, you literally leg it to make sure she’s not halfway down from the house,’ he says.

But once safely fastened into her buggy, her little legs tucked in, the daredevil, whom Ben calls ‘Houdini’ after the famous magician, eventually falls asleep.

Ben and Zoe have to operate their family with military precision from morning to evening, because simple task like bathing the children and putting them to bed demand extreme logistics.

Once a week, Zoe has to iron the 35 shirts seven of her brood will need for the week of school, which can take hours.

The couple make it work by dividing the tasks between the two of them. While Zoe is busy ironing, Ben puts the younger ones to bed and moves on to shining their school shoes in the kitchen with his wife.