A woman whose hairdresser appointment was cancelled amid the coronavirus crisis has taken matters into her own hands by hacking off her hair with a knife.

Corrie Walker had booked herself in for a hair cut but it was indefinitely delayed after New Zealand went into lockdown on March 25.

Sick of her locks, Ms Walker decided to chop them off herself in a nerve-racking video posted to Facebook on Saturday.

‘I literally haven’t brushed it in two weeks, so I am going to cut it off.’

‘Don’t have any scissors though so I’ve got this knife. So I guess I’ll just get to it. I’ve tied it off, that’s what they do right?  And then we just saw it off.’

She then pulls her pony tail up taught vertically over her head with her right hand while she uses the left to saw the long serrated blade through her hair.

‘If you’re wondering, no,  I am not having a mental breakdown, I just don’t have any scissors,’ she says.

After the first knife fails, she goes to the kitchen and returns with three more to try.

The second knife is a success, and she continues to gouge out chunks of hair for five more minutes as the sharp edge teeters terrifyingly close to her scalp and ear.

‘That feels so good,’ she says combing through her thinned-out do,’ I understand it looks like trash at the moment because I literally just sawed my hair off with a knife but I am kinda digging it.’

She then uses an electric razor to tidy up the uneven strands, finishing up with a mullet.

When complete, she walks into a bedroom to surprise her wife with her new cut, causing them to both laugh uncontrollably.

‘You look ridiculous,’ her wife says. 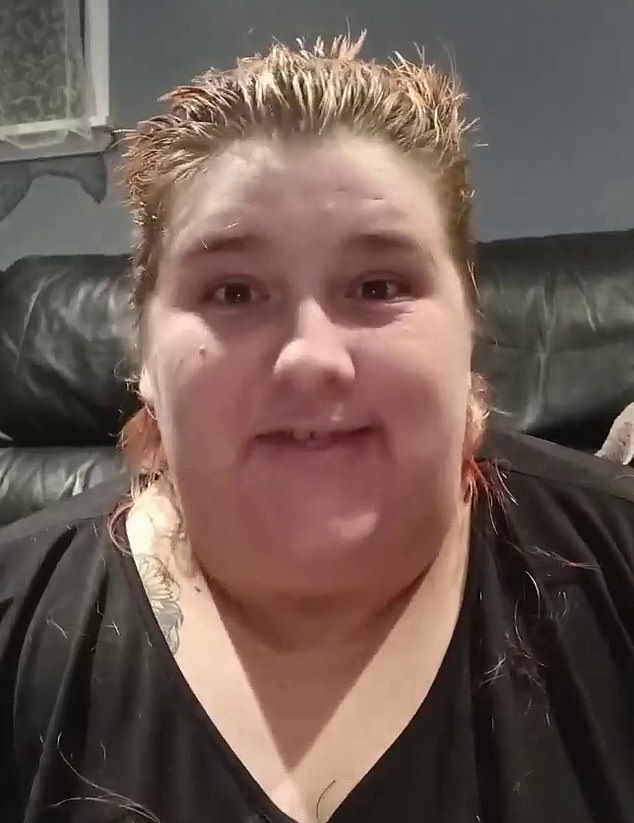 Ms Walker, who appeared good-humoured through out the clip, was praised by commentators for her hilarious approach

‘I’m a hairstylist and THIS is Hysterical. You’re Hysterical!! Thanks for making my day! Rawk that mullet gurl!’ one person wrote.

‘I was living for every minute. Thank you for bringing much needed laughter,’ another comment read.

Someone else added: ‘You’ve got giant lady b**ls !!! I love it LOL. I AM a hairstylist and the knives freaked me out but the end result it not so bad ! You go girl.’

Ms Walker later took to Facebook to address the publicity her clip received, explaining it was made for her family and friends ‘to have a laugh’ and she did not expect it to go viral.

‘Thanks for everyone who enjoyed the video,’ she wrote.

‘My hair will grow back, I am going to be in lockdown for the next 3 weeks minimum and until NZ is back down to level 1, I will not be leaving the house due to respiratory illness so only my poor wife has to deal with this look!’

New Zealand is currently on alert Level 4, with people instructed to stay at home, schools and universities closed, as well as non-essential businesses, major reprioritisation of health services, and travel severely limited.