Ahmad Mohammed, 25, was arrested by Hull police and has been found guilty of arson

CCTV footage has captured the shocking moment a man armed with a meat cleaver and a petrol can marched into a Santander bank in Hull and tried to burn it down.

Ahmad Mohammed can be seen walking towards the cashiers brandishing the jerrycan and blade.

He can be seen to march to the centre of the bank, speaking to a member of staff who is off-screen, as he begins unscrewing the lid, not even pausing for thought.

Mohammed can clearly be seen to gesture wildly as he appears to shout at the member of staff, pointing first in their direction and then at the floor.

As he walks along he pours the petrol in lines across the floor before setting the first alight, filling the room with smoke.

As the flames billow he makes a swift exit but not before throwing petrol around the entrance, making sure that flames block anyone inside from following him.

He was quickly tazed and apprehended by police shortly after and last week appeared before Hull Crown Court.

members of the court were shown the CCTV along with body-cam footage which showed Mohammad attempt to repeat his actions in another nearby bank.

Despite not appearing in court, Mohammed was found guilty of attempted robbery, arson with intent to endanger life, three counts of possession of a bladed article and affray. 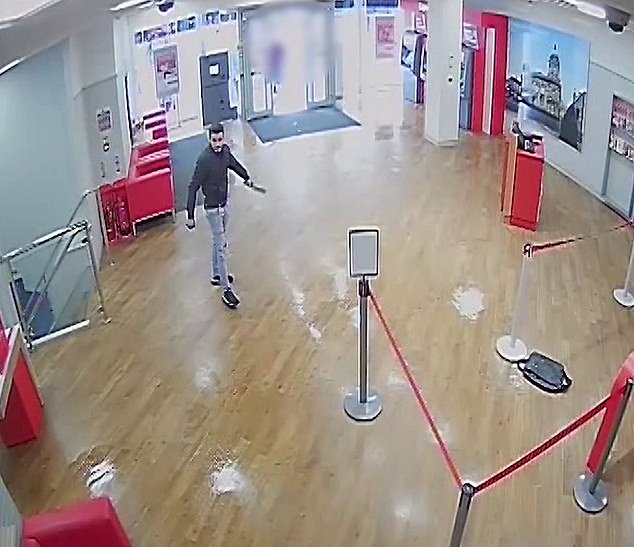 Mohammed can be seen brandishing the meat cleaver as he walks around the shiny, petrol-smeared floor

Mohammed was remanded to Stockton Hall hospital, near York, while Judge Paul Watson decides whether to make him subject of a hospital order.

The judge said Mohammed was ‘very mentally ill’ adding that ‘He is likely to be detained to a secure hospital for a very long time to come.’