‘Let her kiss you!’ Extraordinary moment Australian octopus stretches out its tentacles to suck onto a free diver

This is the moment a Maori octopus stretches out its tentacles to steal a ‘kiss’ from a free diver.

Jules Casey and her diving partner Lawrence Scheele were exploring the waters of Port Phillip Bay in Victoria, southern Australia, during a diving trip on January 28.

Footage shows Casey crawling on the bed of the ocean with her camera extended to capture the extraordinary creature.

Free diver Lawrence Scheele got up close to the Maori octopus on the ocean floor of Port Phillip Bay in Victoria, southern Australia 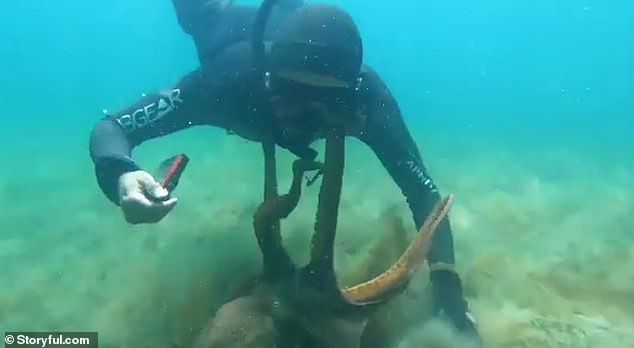 The video shows the octopus stretch out its tentacles as Jules drifts upwards to the surface.

In a second clip, Jules’s diving partner Lawrence floats inches away from the animal as it tries to grab his camera.

The octopus wraps its tentacles around his arm before he gestures for it to move causing it to shrink away.

Lawrence is then seen crawling along the ocean floor as the octopus edges forward to greet him. 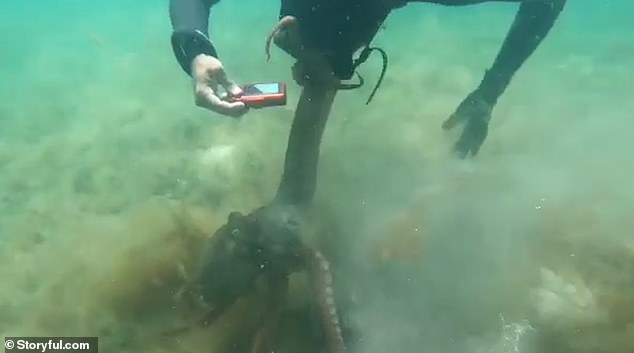 Seconds later, it extends its tentacles and latches onto Lawrence’s head before he swiftly moves away and avoids the creature sucking on his goggles.

Jules posted the video to her 75,200 Instagram followers yesterday with the caption: ‘KISS ME!!

‘When a huge Maori Octopus wants a kiss what do you do???

‘You let her kiss you. My dive buddy wasn’t quite expecting this reaction when he moved in close for a photo.’

The Maori octopus is the largest octopus in southern Australia and it is also known as the Macroctopus maorum or New Zealand octopus.

The species can grow to a span of 9.8ft and inhabit shallow rocky reefs and kelp forests down to a depth of 1,804ft.