The Chicago Blackhawks team mascot was caught on camera bodyslamming a hockey fan after a post-game run-in.

The NHL team’s mascot, Tommy Hawk, starred in a 12-second clip shot during a fight with an unidentified hockey fan on Friday night at Chicago’s United Center, following the Blackhawks’ losing game against the Winnipeg Jets.

In the video, which appears to have been posted first on Snapchat, a man — apparently named McFadden, according to the onscreen text — can be seen holding the avian-themed mascot in a headlock, while surrounded by a handful of people. 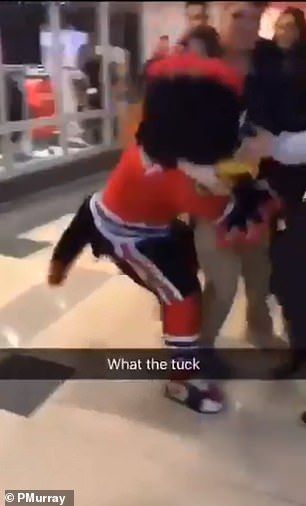 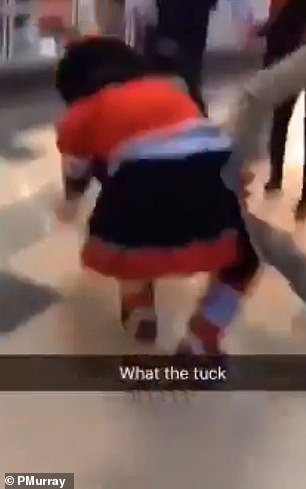 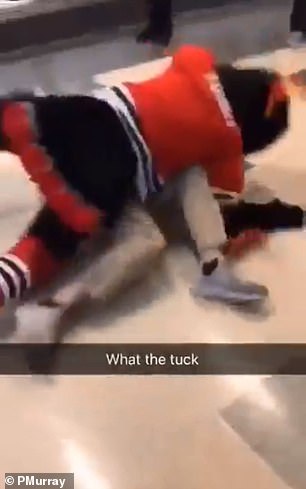 In the video, the fan can be seen putting Tommy Hawk in a headlock before the mascot bodyslams him to the ground. Police said the fight occurred an hour after the game ended

It doesn’t take long before Tommy Hawk turns the tables on McFadden, though.

In one smooth move, the mascot lifts the slender, apparent attacker into the air and bodyslams him to the ground, before aiming punches at his head and torso.

McFadden manages to get back to his feet and the two then wrestle each other, knocking over a garbage bin in the process.

‘Watch out for the kill!’ someone can be heard saying in the background shortly before the bodyslam occurs. 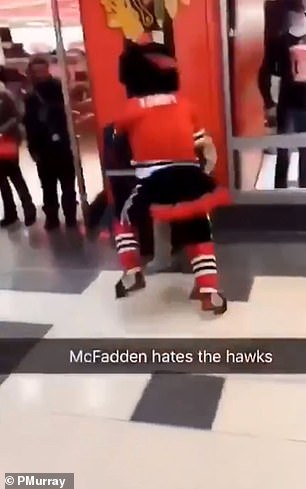 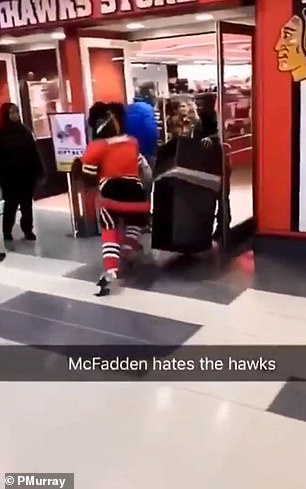 The video identifies the alleged attack as ‘McFadden,’ who is not a Blackhawks fan, but the man has not been identified by authorities yet and no arrests have been made 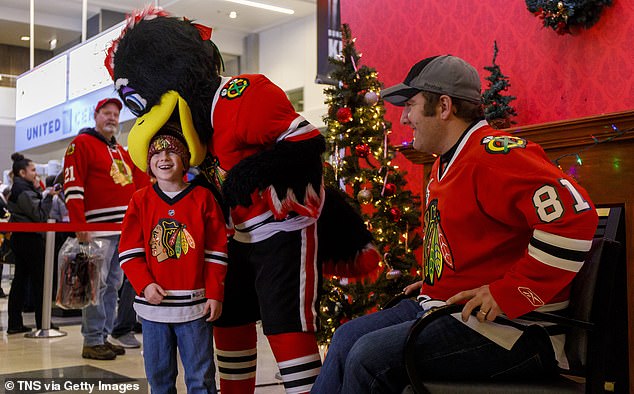 Tommy Hawk was back in action on Sunday at Chicago’s United Center (pictured), goofing around with Blackhawks fans before the game that night

The onscreen text playing over the second half of the video states that ‘McFadden hates the hawks.’

Police said the incident occurred about an hour after the hockey game ended and that the man had initiated the fight.

A spokesperson for the Chicago Blackhawks told the Chicago Tribune that the fight began when the man started yelling obscenities at Tommy Hawk and then put him in a headlock. When Tommy Hawk broke free of the man’s clutches, the man ran off.

Authorities are said to be looking into the incident and have not yet made any arrests.

‘We are aware of an incident that occurred on Friday night between an individual and a Blackhawks’ employee at the United Center,’ the team said in a statement obtained by the Tribune.

‘We are gathering the facts and will have no further comment at this time, pending our investigation.’

Tommy Hawk was back in action supporting the team and taking pictures with fans during Sunday’s home game against the San Jose Sharks.