This is the moment a brave homeowner fights off four armed robbers with his bare hands during a terrifying raid on his home.

Estate agent Asif Ali, 35, confronted the men after they broke into his home in Bamford, Manchester, at around 9.15pm last night.

In CCTV footage of his brave defence of his home, Mr Ali is seen landing a flurry of blows on one thug before two accomplices join the brawl and he fights them off too. 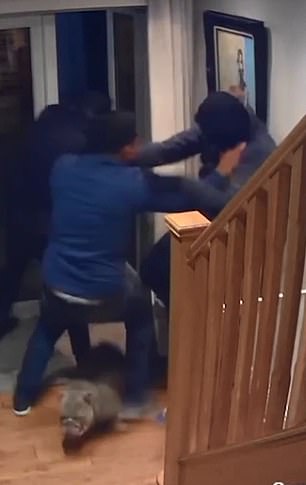 In CCTV footage of his brave defence of his home, businessman Asif Ali is seen landing a flurry of blows on one thug. Another intruder then joins the fray and Mr Ali bravely confronts both

The video starts with a thug, dressed in a hooded jacket and balaclava, walking through the open door of Mr Ali’s home.

The businessman immediately confronts him and ducks a left-handed punch from the thug.

He then launches a flurry of jabs of his own, pummelling him into a corner of his home.

Suddenly another attacker bursts in through the open door and Mr Ali takes on both men at once, with his dog, which had alerted him when it barked at the men, running through their legs.

To add further odds to the fight, a third thug appears but Mr Ali is able to force all three men out of his home.

He tries to shut the door but one thug keeps it open and storms back in the house as Mr Ali runs to his kitchen to pick up two kitchen knives. 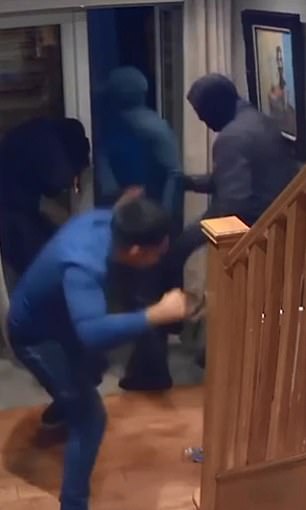 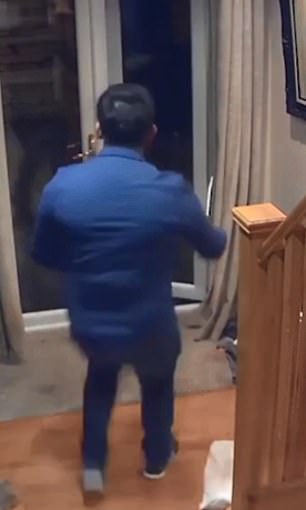 To add further odds to the fight, a third thug appears but Mr Ali is able to force all three men out of his home. Mr Ali forces all three men out and is then seen running to his garden while carrying kitchen knife (right)

As he does so, the thugs are seen in the garden of Mr Ali’s home, with one of them appearing to throw a large block at the door.

However, Mr Ali forces the door back open and runs out to confront them again.

As he does so, his wife Charlotte, 30, who was upstairs in bed at the time of the invasion, emerges into the hallway.

While on the phone to the police, she runs outside to join her husband and the pair go back inside after the thugs have escaped.

One of the men is then seen running through the garden of Mr Ali’s property with his phone pressed to his ear. 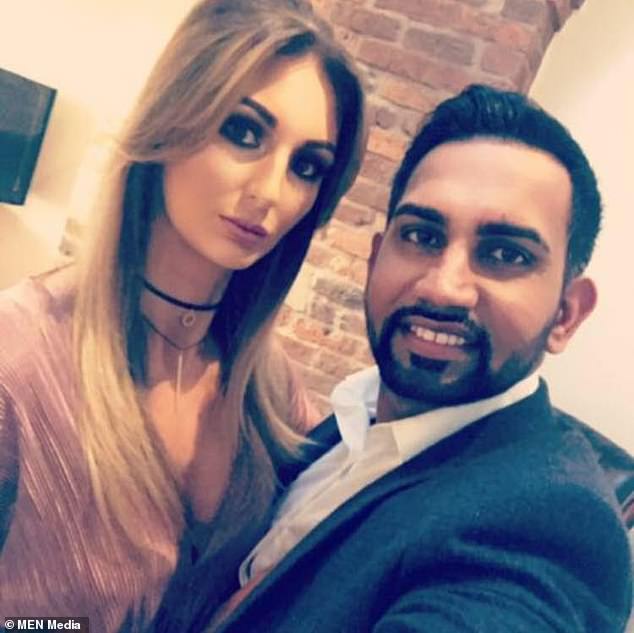 Today Mr Ali, who runs an estate agents and a clothes shop in Rochdale town centre, told how his first thought was to protect his wife Charlotte, 30, (pictured) who was upstairs in bed when the raid took place

Today Mr Ali, who runs an estate agents and a clothes shop in Rochdale town centre, told how his first thought was to protect his wife Charlotte, 30, who was upstairs in bed when the raid took place.

Mr Ali has said how ‘instinct kicked in’ when he was confronted by a man dressed head-to-toe in black standing in the hallway of his Rochdale home last night.

The attempted robbery took place at Mr Ali’s home in Bamford at about 9.15pm yesterday.

He said: ‘I was on a business call when I heard the dogs barking really aggresively.

‘I went to see what was going on and there was someone standing there dressed head-to-toe in black.

‘He threw a punch at me and we started to fight.

‘I didn’t know what I was doing. Instinct just kicked in – I just trying to get him out of the house.

‘A second man came in and I thought he was trying to get upstairs where my wife was. I didn’t want them anywhere near my wife.

‘I got them outside, but they were pulling at the door, then one of them pulled out what looked like a knife, but the police think it might have been a screwdriver.

He started to walk back towards me. I ran back inside and grabbed a couple of kitchen knives and chased them back out.’

Mr Ali says he’s released the CCTV footage in a bid to catch those responsible and is offering a £5,000 reward for any information which leads to a conviction.

‘It was surreal. That someone could be so brazen and just walk into someone’s house like that is unbelievable.

‘We work hard, seven days a week sometimes, for what we have and it makes me angry that some people think they can just come and take that.

‘They knew we were home. The lights were on, the cars were on the drive, the doors were open, and they’ve come into our home armed, knowing there were people inside, knowing there would likely be a confrontation and knowing they would cause some damage.

‘Someone out there knows who these people are. They need to be caught before they do it again.’