Moment British group are sent flying from a minibus

Terrifying moment British group are sent flying from a minibus when it crashes at the start of their Thai holiday, leaving the injured tourists sprawled in the middle of a motorway

This is the terrifying moment a group of British tourists were sent flying from their minibus in a motorway smash in Thailand.

CCTV footage shows the silver vehicle veering off after a wheel exploded and spinning out of control into a central barrier yesterday.

Several of the tourists were thrown out of the van and left sprawled in the middle of the highway as motorists behind them frantically applied the brakes.

All eight tourists in the minibus were taken to hospital, three of them critically injured, just hours after they had landed in the country.

Out of control: CCTV footage shows the silver vehicle veering off after a wheel exploded and spinning out of control in Thailand yesterday 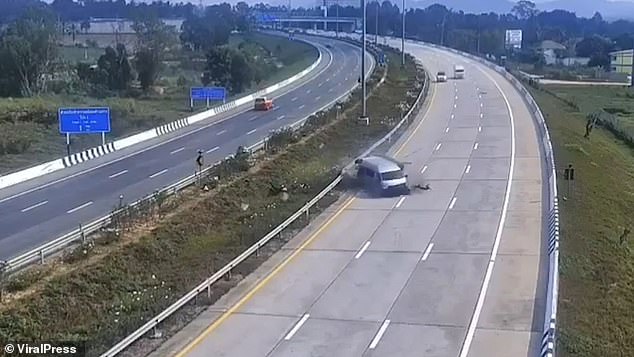 Impact: The minibus ploughed into the central reservation on the motorway as the group travelled from Bangkok airport to a popular party resort 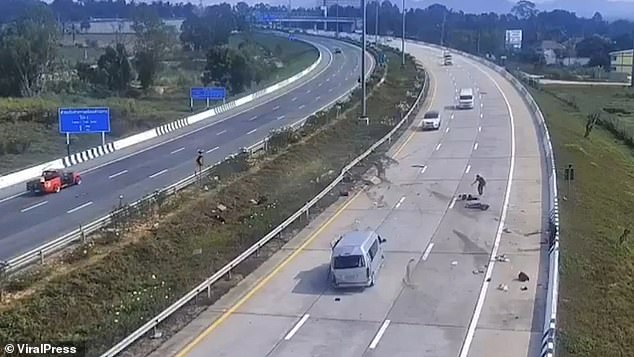 Debris: People were left sprawled over the motorway, luckily far enough ahead of other cars that motorists were able to brake in time

The group had landed in Bangkok yesterday morning and were on their way to the popular party resort of Pattaya on the country’s east coast.

But their vehicle veered out of control at 10.30am when the rear left wheel suddenly exploded.

The minibus was sent spinning to the right and ploughed into a central reservation, hurling four passengers into the road.

The oncoming traffic was far enough behind them that the shocked motorists were able to brake in time.

Three of the passengers hurried to get back to their feet while another had to be helped off the motorway.

All eight tourists were taken to hospital with three critically injured. 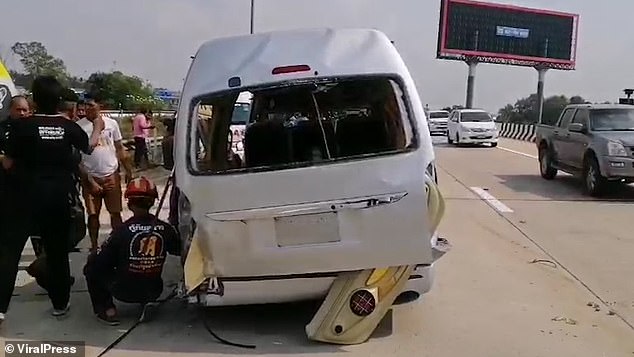 Damaged: People inspect the minibus after it crashed into a central married on the motorway 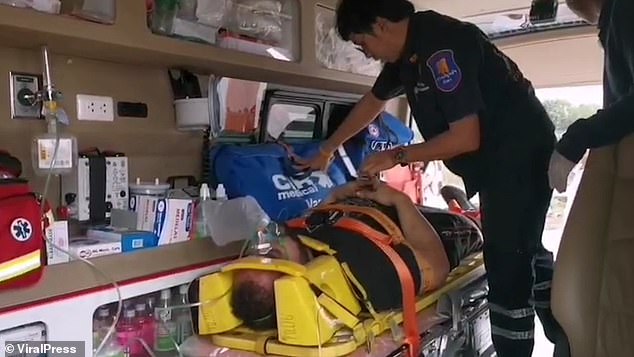 Treatment: All eight tourists in the minibus were taken to hospital, three of them critically injured, just hours after they had landed in the country 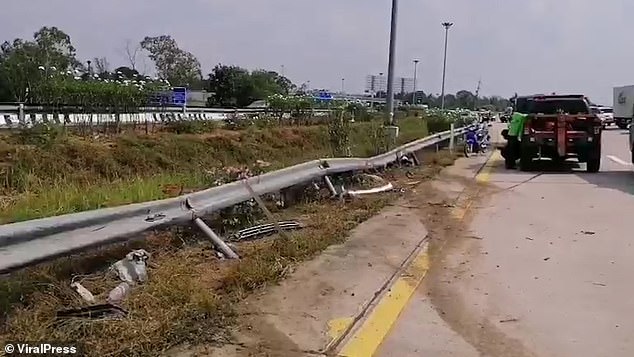 Collision: The central reservation on the motorway was bent out of shape after the one of the minibus’s wheels exploded and crashed into the barrier 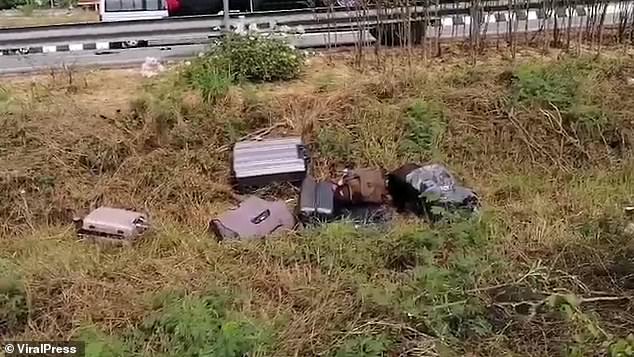 Debris: Suitcases belonging to the British tourists who had landed in Thailand just hours before the motorway smash

The driver, Thanakorn To-iam, 53, suffered injuries to his right leg and nose, and was taken to hospital.

Thanakorn told police he had picked up his passengers at Suvarnabhumi Airport and was heading to tourist attractions in Pattaya.

He said when the van’s rear left tyre exploded on the motorway, causing him to lose control of the vehicle and crash into the barricade.

He added: ‘The driver’s evidence matches the CCTV which shows a sudden bursting of the wheel at the back of the vehicle causing the crash.

‘He was not speeding or driving dangerous, but we will check the vehicle to ensure it has the correct paperwork.’