This is the shocking moment two men rushed a mother at her home’s driveway in Argentina and stole her minivan while her six-year-old son was inside.

Surveillance video showed the moment Claudia Crespo was about to depart her home in the Buenos Aires city of Almirante Brown with her six-year-old son Mateo on Thursday afternoon.

Crespo had been heading to her mother’s home to drop off her child and meet her husband at the couple’s newly opened hair salon.

She had got out of her car to lock the gate to her driveway when the carjackers ran towards her car while the engine was still running, and got in through the driver’s side door.

The terrified mother grabbed the chain that she uses to lock the driveway door and opened the car’s door to beat the getaway driver while begging them to release her child.

She was left screaming as the criminal put the vehicle in reverse and sent Crespo crashing to the ground, almost running her over as they sped away.

The carjackers stopped about 650 feet down the street and kicked the boy out of the vehicle.

Carla Crespo (front left) confronts two carjackers Thursday outside her home in Buenos Aires, Argentina, before the men stormed off in her car while her son was in the backseat. 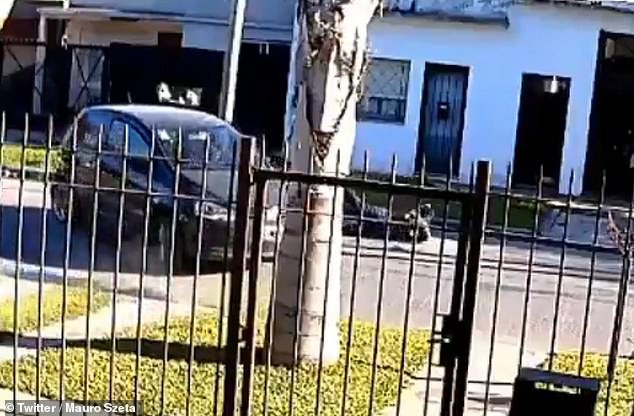 Carla Crespo crashed to the ground and broke her left arm while she was trying to stop the carjackers from taking off with her six-year-old inside the car in the Buenos Aires town of Almirante Brown on Thursday. Crespo said she was on her way to drop of her son at her mother’s home before going to work when two men rushed her car

Crespo, who fractured her left arm, told reporters outside her home Thursday morning that her family’s residence had been burglarized on two prior occasions.

She was accustomed to surveying her surroundings each time she locked the front gate before driving off.

‘When I closed the gate I saw them coming,’ she said.’ ‘I just wanted to get him out. I felt like I was dying, I didn’t care about the car, I just wanted my baby. I was despaired. I didn’t care that they had weapons, only [cared about] my son.’ 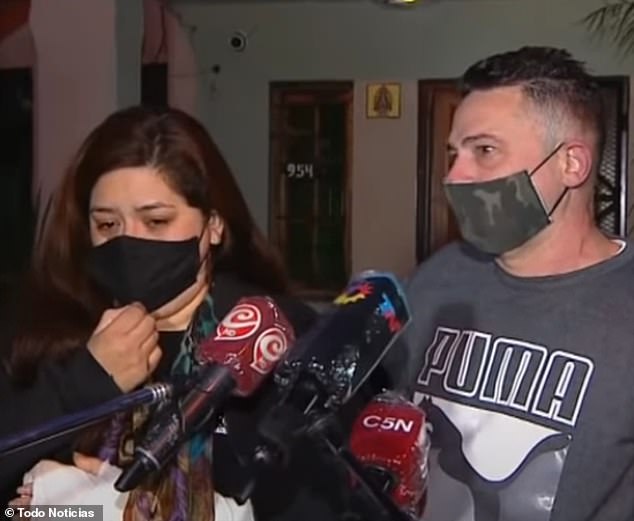 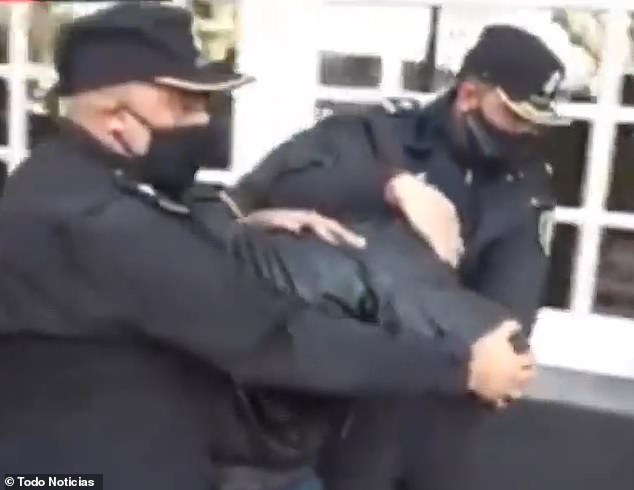 Police in Buenos Aires arrested the two carjacking suspects on Friday morning. Both men had been arrested 10 times in the past

The suspects, whose names have not been made public, were arrested Friday. One of the arrests took place in the town of Florencia Varela and the other in Almirante Brown, according to Sergio Bruni, who heads Bueno Aires’ Ministry of Security.

Both suspects had been arrested 10 times in the past.

‘I would have done exactly the same thing as the mother, and any father or mother would have reacted in the same way when they see the madness that they are going through,’ Bruni told reporters Friday. ‘

You know that I am the standard bearer of disarmament and not against resistance in an event like this, but I am also a father and I know that I would have reacted the same or worse way.’