Armed police smashed into the west London home of a 44-year-old man accused of stabbing beloved busker Thomas O’Halloran to death in a tense 30-minute standoff, neighbours revealed today – amid mounting anger as a wave of violent crime sweeps the capital.

The 87-year-old grandfather, a member of the Irish community in Ealing who was raising money for Ukraine war victims outside a Tesco store and South Greenford railway station, was fatally attacked in his mobility scooter in Greenford on Tuesday – in a daylight attack that has appalled the country.

Scotland Yard has said a suspect was arrested at a property in nearby Southall – less than two miles from the scene of the attack – early today and remains in custody.

Shocked residents have told MailOnline how more than six police officers used a battering ram to smash down the front door of the suspect’s semi-detached home on Allenby Road at around 1.30am and shouted for the man to give himself up before he emerged and was pushed to the floor and handcuffed. The house is occupied by a Jamaican couple, they added.

One neighbour said: ‘It was 1.30am and I was woken up by shouting a lot so cars arriving. I looked out and could see the police trying to smash down the door. They were using some sort of battering ram.

‘Some of them went inside, but there was no sign of anyone. That lasted for about 30 minutes. Then they brought out a man. He was resisting and they pushed him to the floor and handcuffed his hands behind his back. Two of the police lifted him off the pavement and took him to a car.’

Another said: ‘There was some shouting and when I looked out there seemed to be lots of police. Some were in plain clothes. I immediately thought it must have something to do with the murder in Greenford. I do not know the person who lives there, but we would wave hello. It’s all come as a bit of a shock.’

This morning, a police forensic team arrived at the address in Southall, and one of the officers used a torch to illuminate the white door frame and doorbell. A police car was parked outside the semi-detached home, with red tape across the driveway.

It comes as London Mayor Sadiq Khan faced growing pressure to crack down on violent crime after Mr O’Halloran’s suspected murder – the sixth such killing to have taken place in the past four days alone in Britain’s ‘lawless’ capital.

Thomas O’Halloran, 87, was stabbed to death while riding his mobility scooter on Tuesday 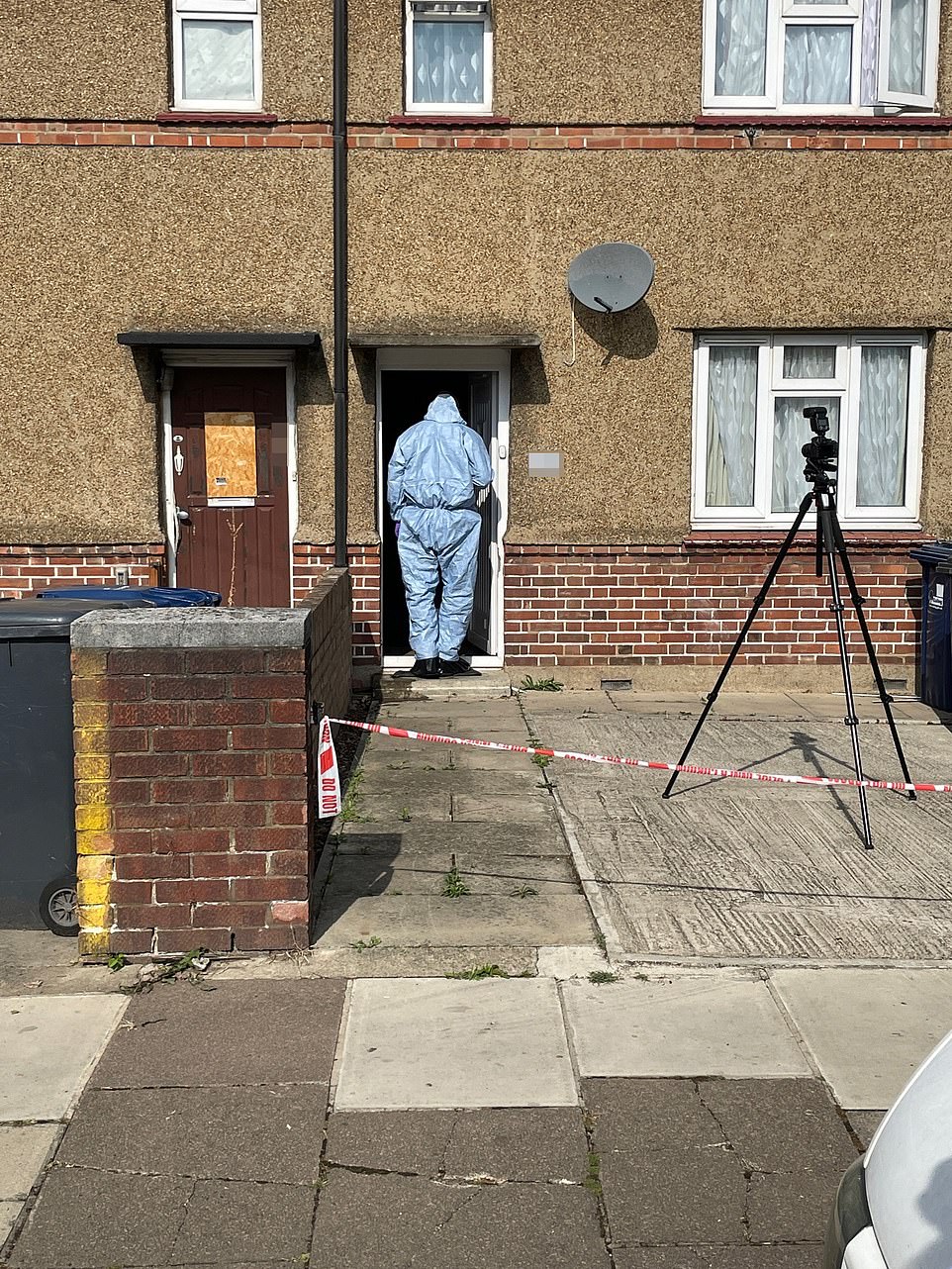 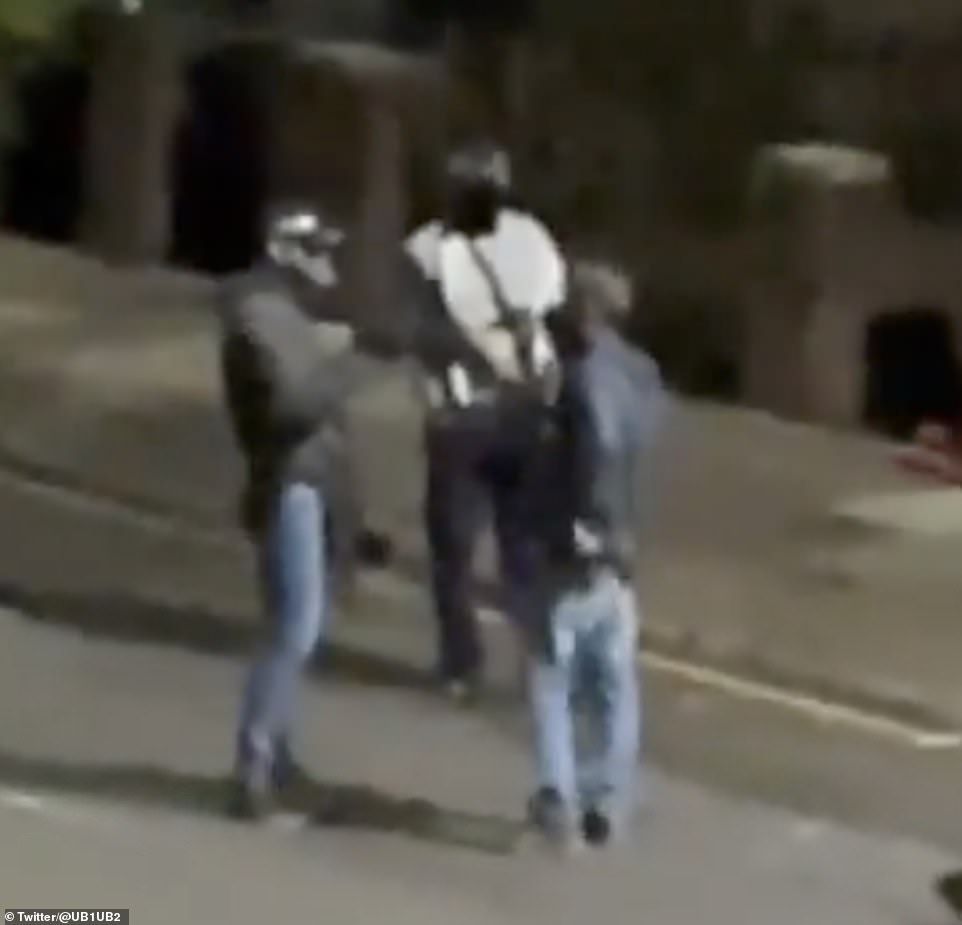 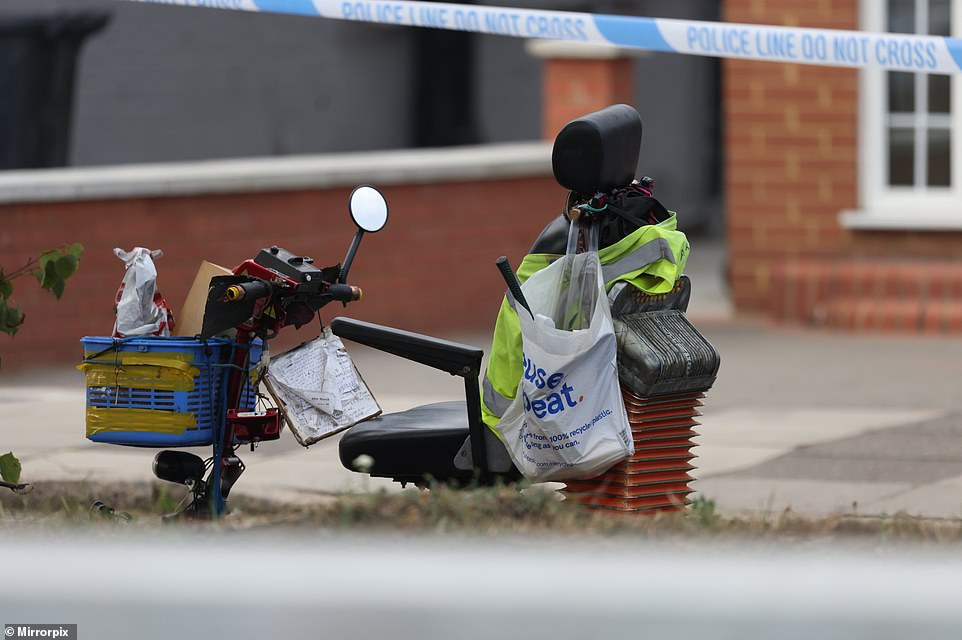 Mr O’Halloran’s mobility scooter with the Ukrainian flag’s colours, in Greenford on Tuesday 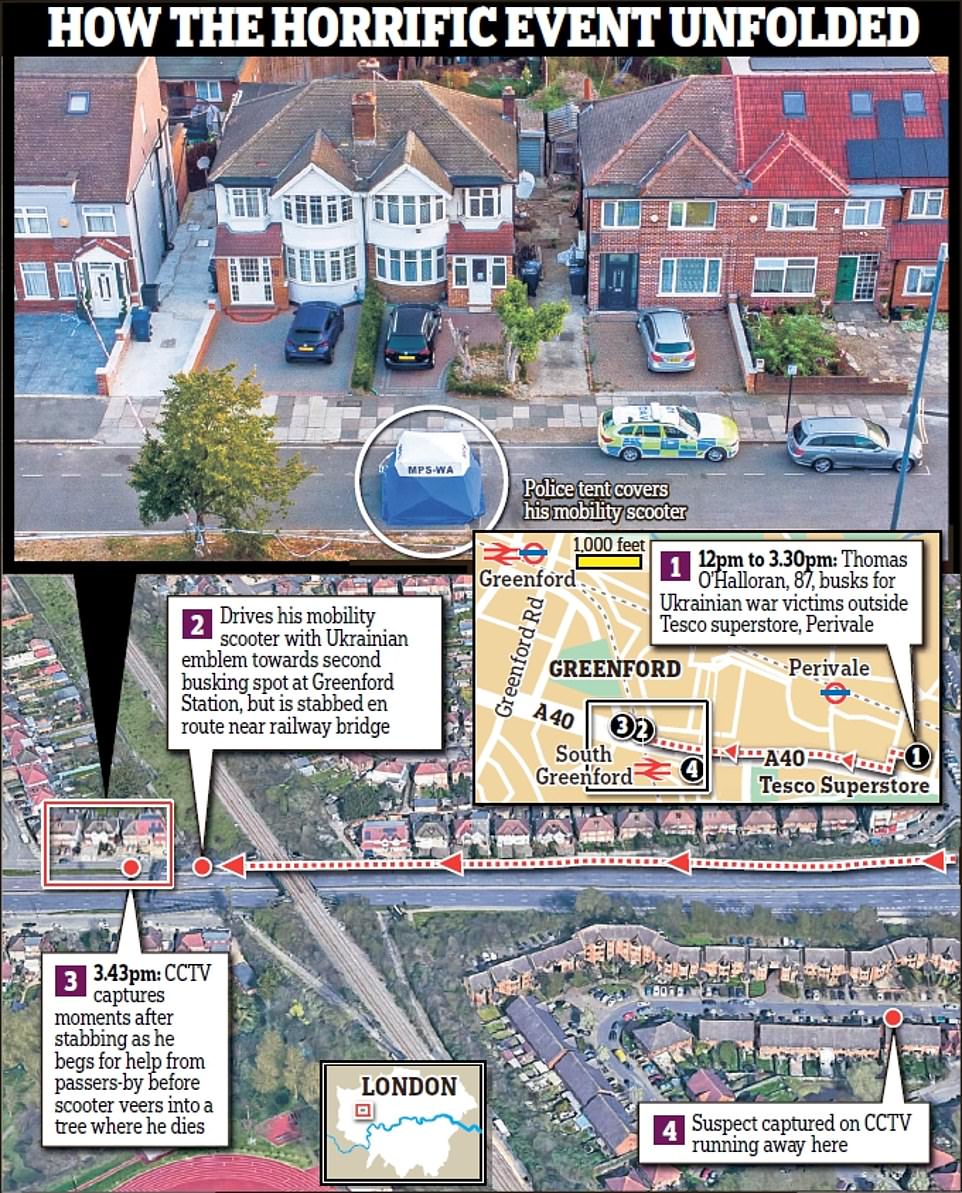 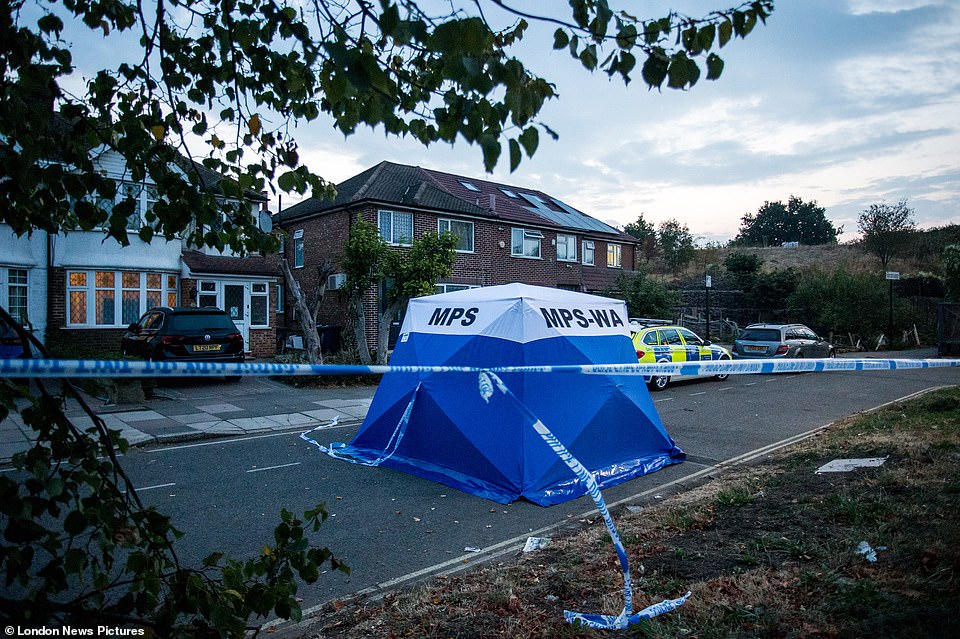 A police cordon and tent in Greenford, west London yesterday

The well-known busker who was brutally murdered: Thomas O’Halloran, 87, raised money for victims of the Ukraine war as he busked at his local Tesco and train station

Thomas O’Halloran was well-known in the Greenford area for busking outside the train station and Tesco, and in recent months he had used his musical talent to raise money for Ukraine.

The 87-year-old from Ennistymon in County Clare, Ireland played the accordion from his mobility scooter, which had a Ukraine flag tied to the basket.

A friend said he headed to the Tesco Superstore at around 12pm every day to play his instrument and would stay there until the late afternoon.

He would then travel to Greenford Station to catch the commuter rush before going home again at about 7pm.

Friends and neighbours have praised him as ‘a very good musician’ who ‘just loved playing music and making people happy’.

Mr O’Halloran uploaded a video of himself playing the accordion to YouTube in October 2020.

In the video captioned ‘A few songs on the Accordion’, the elderly man can be heard saying ‘here we go, ready? wish me luck’, before he starts to play.

Detective Chief Inspector Jim Eastwood, who is leading the investigation, said: ‘I would like to thank the public for their overwhelming support following this horrific incident. As a result of the release of a CCTV image yesterday, an arrest has been made and this investigation is progressing at pace.

‘Mr O’Halloran’s family have been updated with this development and continue to be supported by specially trained officers.’

It comes after officers were called to Cayton Road in Greenford, west London, on Tuesday to reports of a stabbing and Mr O’Halloran was declared dead at the scene.

Detectives believe Mr O’Halloran was stabbed in Western Avenue at about 4pm before managing to travel around 75 yards on his mobility scooter to Runnymede Gardens, where he flagged down a member of the public for help.

Mr O’Halloran was originally from Ennistymon, Co Clare, in the west of Ireland. The local community in Clare expressed their ‘deep shock’ following the pensioner’s death. He is survived by his family, including his sister, two brothers, nieces and nephews.

Mr Conway noted the passionate musician was ‘very popular’ in Greenford and often busked for charity.

He can be seen playing his accordion and smiling, with a makeshift blue and yellow collection box strapped to his frame, in the video posted online in June.

Harrowing footage released yesterday showed the much-loved busker 20 minutes before he was attacked in broad daylight in an alleyway next to the busy A40 Western Avenue.  The footage was taken at 3.48pm as he passed a newsagent shop close to the superstore.

Police were called 18 minutes later at 4.06pm after Mr O’Halloran was ambushed as he headed towards Greenford Station a mile away.

Former Labour MP Stephen Pound paid tribute to the pensioner, an ex-constituent whom he knew from the busker’s regular public presence in the area.

He told GB News: ‘Tom was a real local character. He would be outside Greenford station playing the accordion, occasionally the harmonica.

‘He was a sweet, lovely man… He was well-liked and well-loved, but, above all, he was one of those characters who would cement an area.’ 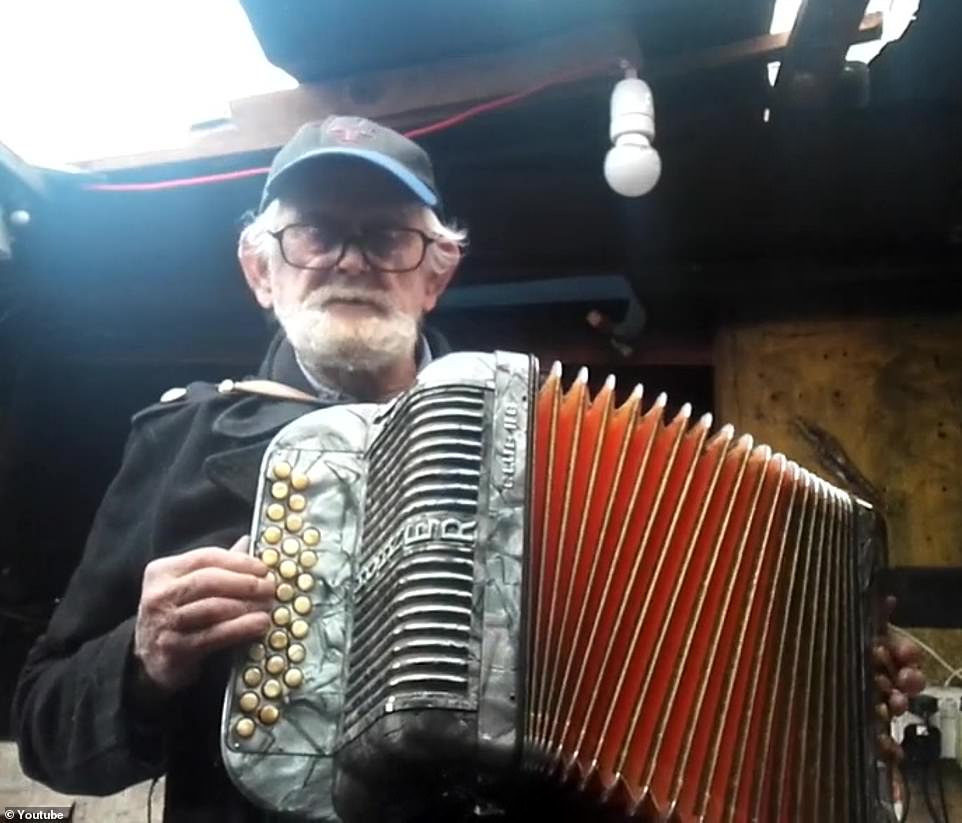 Mr O’Halloran had spent many an afternoon collecting funds for charitable causes in the Greenford, west London area before he was knifed to death 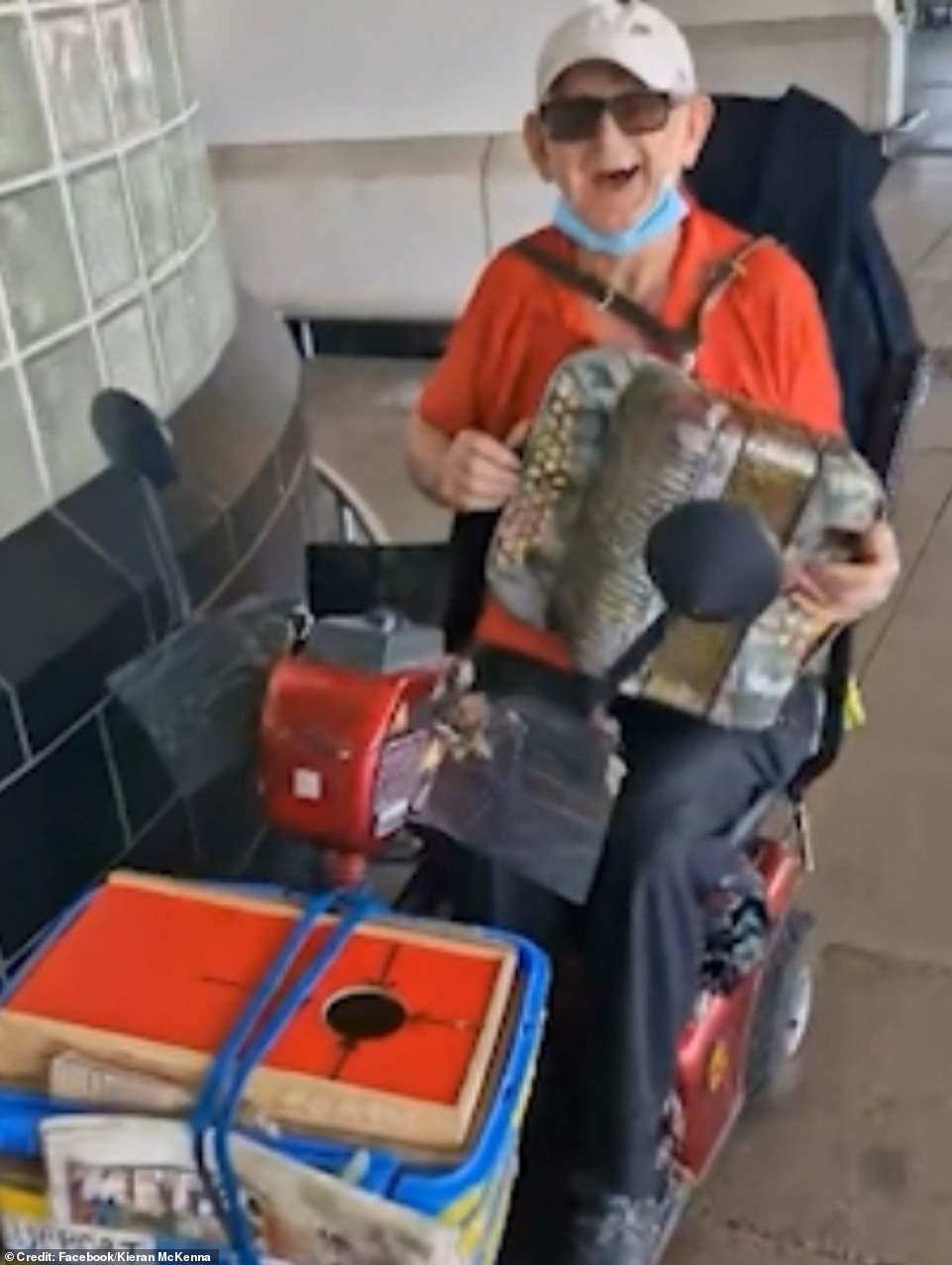 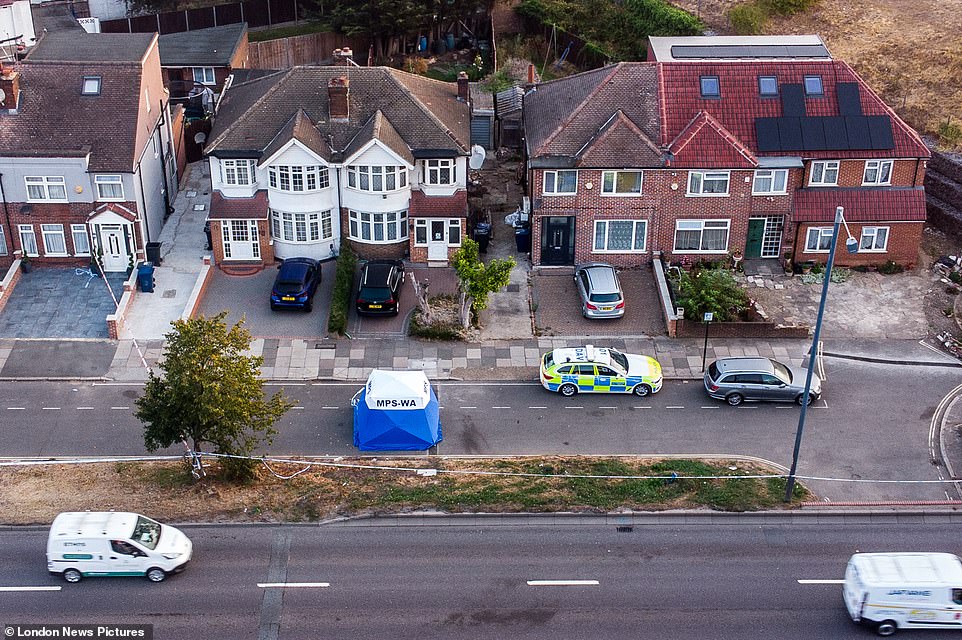 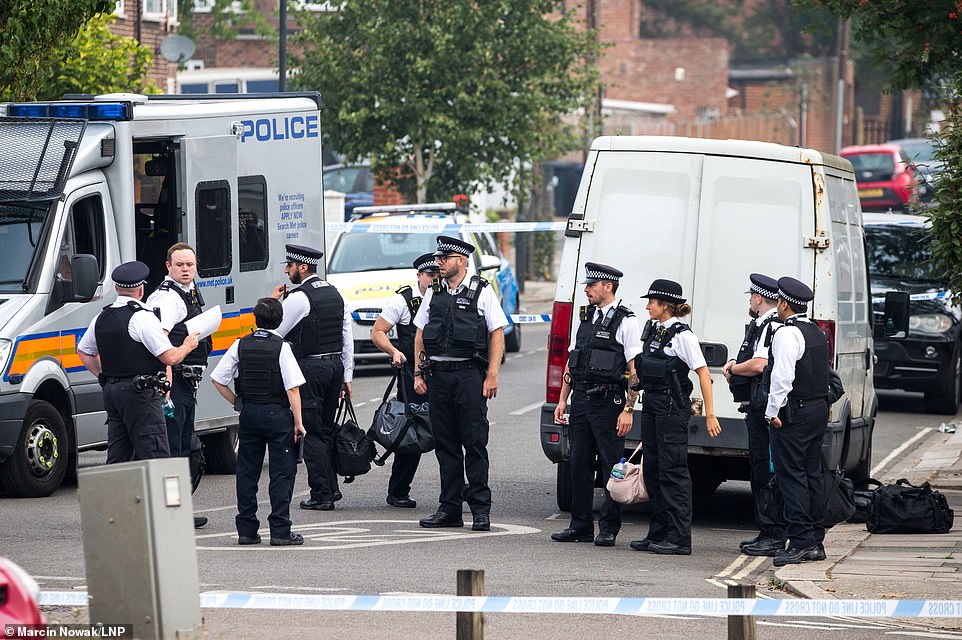 Metropolitan Police officers, pictured at the scene yesterday, were called at 4pm on Tuesday

It comes as Mr Khan faced growing pressure to crack down on violent crime last night after Mr O’Halloran was knifed in an unassuming suburb in broad daylight.

Tories accused the Left-wing leader of doing ‘next to nothing’ following six murders in four days and 59 so far this year.

Former policing minister Kit Malthouse called for Mr Khan to consider introducing tough measures similar to those brought in by Boris Johnson when he was London mayor.

Mr Malthouse, now Chancellor of the Duchy of Lancaster, told LBC radio station that London ‘has been plagued by knife crime in the past and seems to be in the grip of it again’.

He added: ‘I just hope that the mayor starts to take this as seriously as we did all those years ago and leans in hard.’

Anyone with footage of the incident is asked to upload it via an online form. Anyone who knows the man in the image, or has details about the murder, is asked to call the incident room on 020 8358 0300 quoting 4691/16AUG. Alternatively, contact Crimestoppers anonymously by calling 0800 555 111 or by clicking here