The is the heartbreaking moment an engaged couple said their goodbyes after being torn apart in an immigration mix-up.

For most people, heading to Birmingham Airport marks the start of a break away from reality or a sunny trip abroad.

But yesterday it was the backdrop for a devastating goodbye as Richard Brown and Christy Manganti were forced apart.

Saddening footage, taken outside the airport, shows the couple staring into each others eyes as they said their farewells before Ms Manganti was deported to the Philippines.

Mr Brown, 54, said: ‘It was so upsetting seeing her taken away by security, who had to give her back her passport to get through.

Richard Brown, 54, and Christy Manganti, 39, were forced to say farewell to each other at Birmingham Airport

‘We were just full of hope of just being able to live together and get married. But now all that’s changed, and it’s cost a lot of money and we’re just heartbroken really.

‘She’s got family in Birmingham, including two young nieces she had to say goodbye at the weekend. It was very emotional, lots of tears, little girls clinging onto her. It was dreadful.’ 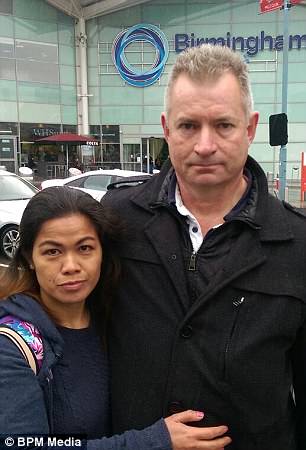 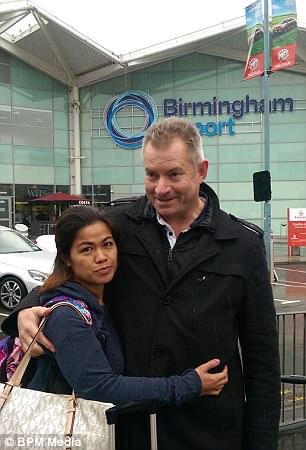 Ms Manganti moved to England last August to live with family in Birmingham. She met her fiance and moved into his Derby home in November

The happy couple had met on online dating app Badoo just weeks after the Filipino made the huge move to England.

Mr Richard said: ‘We met and started this relationship, we didn’t really decide we’d make a go of it until November, since then we’ve been in regular contact and she moved into my house in Derby.’

The 39-year-old had come over from the Philippines with her sister, brother-in-law and two nieces last August to work as a nanny for her sister.

She’d entered the country on a domestic worker’s visa, which lasts six months and therefore expired in February.

The engaged couple had tried to make arrangements to keep Christy in the country, but there was a detrimental mix-up at the local law firm.

Mr Brown, who works as an IT contractor, told how they had applied for what they thought would be a two-and-a-half-year extension to his fiancee’s visa. 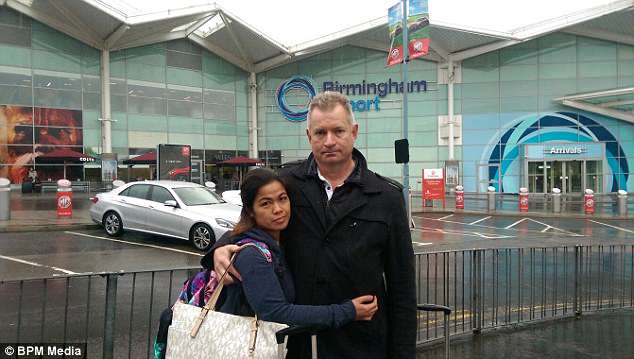 They applied for a two-and-a-half year extension to Ms Manganti’s visa, the couple claim, but a local law firm sent the wrong papers to the Home Office

Mr Brown said: ‘However, there is no route whatsoever to extend a domestic worker’s visa. The only possibility is to apply for a fiance visa, but she has to go back to the Philippines for that.’

The IT worker claims the Home Office took a total of £1,493, despite the fact the law firm had submitted the wrong form.

The couple were charged an extra £2,500 from the law firm.

He added: ‘Somebody should have told us from the beginning that the only way of doing it was to go back to the Philippines, that will cost another £1,500.’

Nottingham Registry Office will wed the couple on October 31 later this year and Ms Manganti is expected to return in August once the fiance visa is in place.

A statement from the Home Office read: ‘We did not enforce Miss Maganti’s depature. We do not routinely comment on individual cases.

‘Any individual whose application to remain in the UK has been refused is expected to make arrangements to depart voluntarily.’