Moment cyclist is left sprawling on the floor after crashing with a van…. but who is in the wrong?

Moment cyclist is left sprawled on the floor after crashing with a van as he tried to take the exit at a roundabout…. but who is in the wrong?

A nasty collision between a van and a bike which sent a cyclist flying has sparked huge debate online over who was at fault.

Dashcam footage of the crash, which took place at the Stoneferry Roundabout in Hull yesterday, has been the subject of much debate since being uploaded on social media.

The video begins by showing the cyclist, wearing bright orange, riding around the junction and taking the exit in front of the recording car.

However, as he cycles past, a van in the lane next to the cam car apparently does not see him and continues to drive ahead.

The cyclist is hit in the side by the van and sent flying into the road.

Meanwhile, van’s registration plate is seen bouncing along the tarmac, having been torn off during the impact.

The cyclist rolls on the ground before managing to right himself and stand up.

The van driver is then seen getting out of his vehicle to help assist him.

The crash comes amid a government drive to get more people cycling as Britain eases itself out of lockdown.

Dashcam footage captures the cyclist, pictured in bright orange, coming around the roundabout 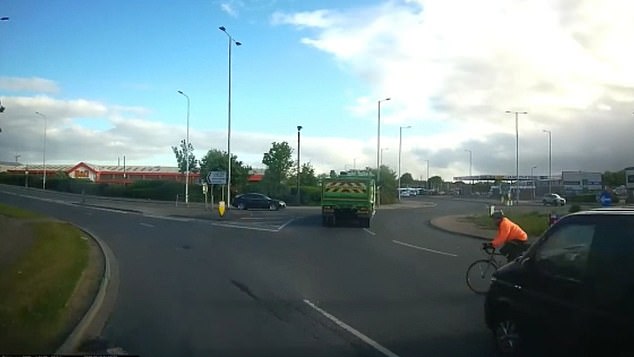 Seconds later, a dark van approaches and appears to be on a direct collision course with the cyclist 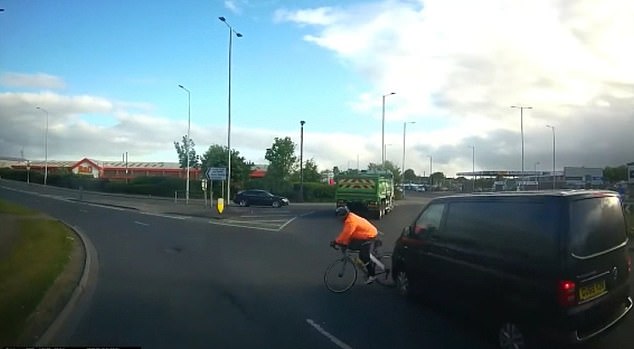 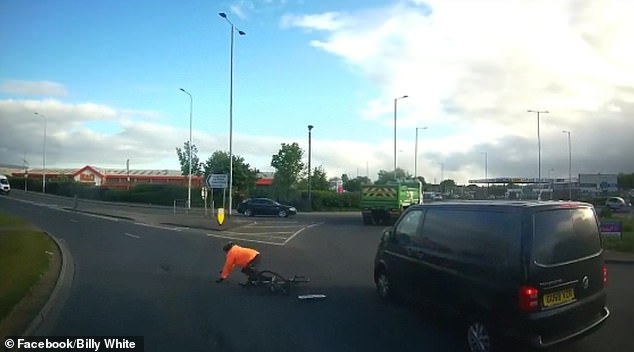 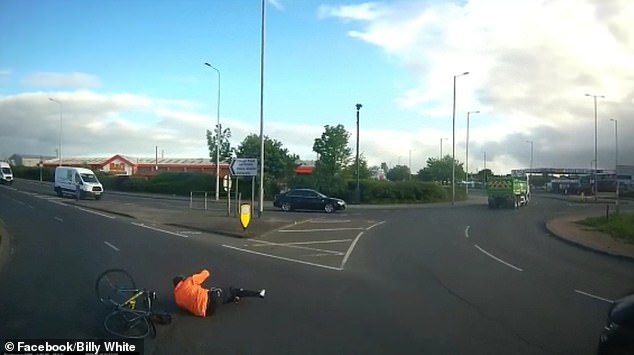 The footage then captures the cyclist laying on the road, as social media has been divided over who should shoulder blame for the crash 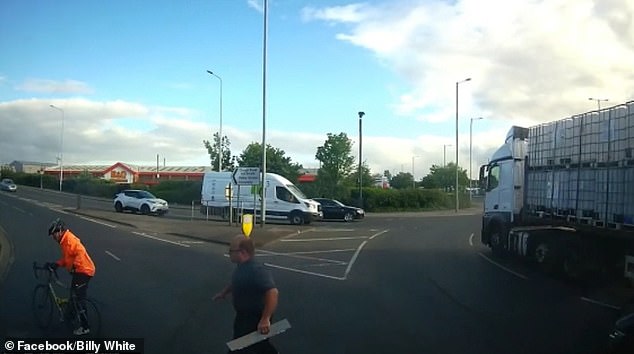 The van’s registration plate is seen bouncing along the tarmac, having been torn off during the impact as the driver is then seen getting out of his vehicle to help assist him

Transport Secretary Grant Shapps last week announced a £2billion funding package to encourage people to get on their bikes once restrictions are loosened, claiming the aim was to relax the strain on public transport, which will only run at a tenth of pre-lockdown capacity because of social distancing rules.

Yet the proposal hit the buffers straight away as workers claimed it is impractical – and even potentially perilous for novice cyclists navigating busy city roads.

However, after being viewed more than 130,000 times in 24 hours, opinion was split among those commenting on the post.

One viewer wrote: ‘As annoying as cyclists are, this one is not at fault. The (clearly blind) van driver hit him because he wasn’t paying attention.

‘The lorry saw him so why didn’t the van? Anyone blaming the cyclist needs to give their head a wobble.’

Another, with an opposing view, claimed: ‘I’d be suing the bike he took the van’s reg off.’

Some questioned how the driver could have missed the cyclist in such bright-coloured clothing, as others argued he was in his blindspot and couldn’t have seen him.