The senior men’s players of the West Footscray Roosters Football Club in Melbourne’s Western Region Football League got a spray for the ages from their stand-in coach Adrian Spiteri recently.

A video has emerged of Spiteri completely losing the plot when a player reached for their mobile phone during a speech in the sheds.

‘Most of all, this is the West Footscray way.’

Then things got heated when a player at the back of the room reached for their mobile phone.

‘Hard at the man, very hard at the ball. It’s as simple as that. That’s the West Footscray way.’

The tongue-lashing came with the club winless from 18 games and looking like certainties to be relegated. 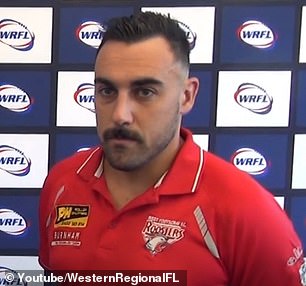 For some fans, it took them back to their suburban footy days.

‘I enjoyed watching West Footscray when I was a … local. I understand why I didn’t take the kids into the huddle for the 1/4 & 3/4 time breaks,’ Charles Davis said.

Others drew comparisons with the AFL and how the reaction would be different if a senior coach was caught delivering such a withering spray.

‘If this was North Melbourne, more than half the players would quit on the spot,’ Jase tweeted.

‘And get the coach sacked,’ Jase replied.

Others cheekily defended the player who made the mistake of reaching for their device.

Spiteri is a long-standing assistant coach of the Roosters and has been thrust into the head coach position after the club parted ways with Ian Fox in July.

The Roosters are likely to be relegated to division three in 2023.

However, there could be hope on the horizon with Western Region Football League premiership coach Troy Beamond appointed for the 2023 and 2024 seasons.

He coached the Wyndhamvale Falcons to a division 2 premiership in 2015, beating the Roosters in the grand final.

‘Troy comes to us with a proven record — promoting a culture of success, professionalism and youth development — his coaching experience will be an asset to the club as a whole,’ the Roosters said in a statement.