Riccardo Calder, 22, repeatedly hit the 24-year-old woman through her open car window after she collided with his Mercedes in a pub car park on May 6. He is seen arriving at Birmingham Crown Court on December 12

This is the moment a ex-Aston Villa and England under-17s player kicked, punched and threw his shoe at a student nurse during a brutal road rage attack.

Riccardo Calder, 22, repeatedly hit the 24-year-old woman through her open car window after she collided with his Mercedes in the car park of a Birmingham pub on May 6.

The mother-of-one pleaded with him to stop during the prolonged attack, which left her fearing she had bleeding on the brain. She also suffered two black eyes, cuts, bruises, a fractured thumb and flashbacks.

Calder, of Kings Heath, south Birmingham, was found guilty of assault following a trial and jailed for nine months on December 12. He was also banned from having any contact with the woman for five years.

The midfielder and left-back joined Villa’s under-23 team on May 31, 2017. He never played for the first team but had been a substitute.

He left for Inverness Caledonian Thistle on July 6, 2017, and was sacked on November 8 this year after his offences came to light.

Now, CCTV footage above has been released showing how the horrific attack unfolded.

The victim had been out with a friend at Bamboo club in King’s Heath and had intended to get a taxi home and pick her car up afterwards.

But she bumped into Calder, whom she had known for a year after being introduced by his sister. 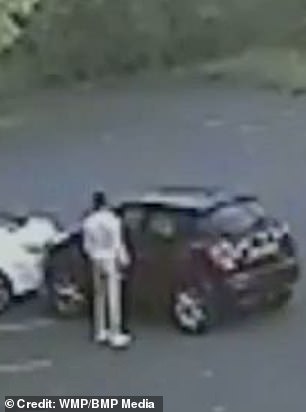 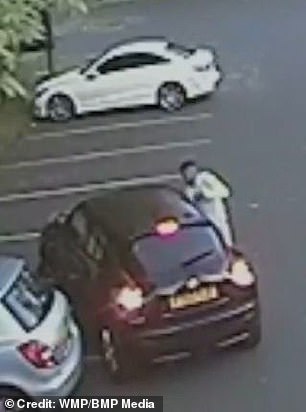 CCTV footage above has been released showing how the horrific attack on May 6 unfolded. Calder is seen standing outside the victim’s car (left) before punching her through the open window (right)

He offered to give her a lift in his Mercedes, but there came a point when the pair were in separate cars and she collided with the rear of his vehicle.

The victim took the view that – as they knew each other and she was insured – they could sort it out later.

He then flashed her to pull over in the pub car park.

CCTV captures from the moment the pair park up in parallel bays. Calder then examines the rear of his car while walking towards her.

He is seen punching her through her open car window after which she desperately reverses to get away.

In a panic, she tries to drive off but collides with his ‘treasured’ Mercedes for a second time.

She parks and he runs over to her, punching her in the face repeatedly through the window. He yanks opens her car door and kicks her twice.

The footballer then grabs a shoe from inside her vehicle and attacks her with it while trying to drag her out onto the floor. 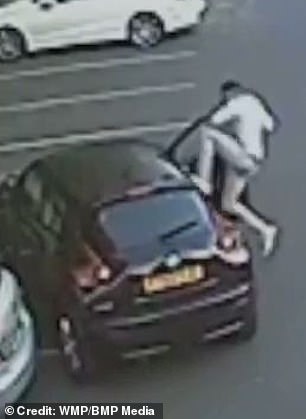 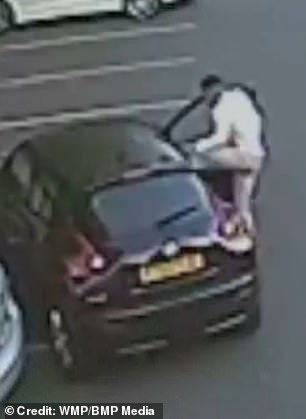 The victim said she was ‘utterly disgusted’ by Calder’s actions and later sent messages to a mutual friend asking for £5,000 to not go to the police.

The messages read: ‘I do know that he’s going to have a good life ahead of him and do know this was a mistake. But what he’s done is still out of order and he can’t get away with it.’ 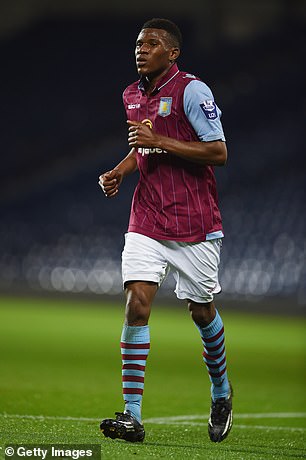 Calder playing for Aston Villa’s under-21s at The Hawthorns in West Bromwich on October 16, 2014

Mark Phillips, prosecuting at Birmingham Crown Court said: ‘There is no suggestion there was any romantic attachment between the two.

‘Simply they were friends who went out clubbing together from time to time.’

In passing sentence, Judge Wall said: ‘I have no doubt that telephone call was made so you could get your defence in.

‘I accept you are a young man of previous good character who had before him a promising life as a professional footballer.

‘You did not do this all in one piece. On more than one occasion you walked away and you had the opportunity to leave.

‘You were an angry man attacking a defenceless woman, alone inside her car. Throughout the case you have shown no regard for her at all.’

Abdul Iqbal QC, defending Calder, had been playing for Inverness Caledonian Thistle at the time of the incident.

Mr Iqbal said at the time of the incident he had not been earning large amounts and the Mercedes was his first possession and his ‘treasure’.

Mr Iqbal claimed the victim tried to drive off after the first collision and said Calder ‘lost his temper’.