Video has emerged showing Senator Elizabeth Warren on Monday being confronted by a man who says her plan to forgive student loan debt would be unfair to people like him who worked hard to pay off what they owed.

The encounter took place during a Warren campaign stop in Grimes, Iowa.

After the event, Warren greeted well-wishers who waited to shake her hand on the ‘selfie line.’

At one point, a man who appeared in his 40s or 50s stepped up a few feet from Warren and demanded to get his money back after paying off his daughter’s student loans.

A man (right) approached Senator Elizabeth Warren in Grimes, Iowa, on Monday after a campaign event to confront her about her plan to forgive student debt 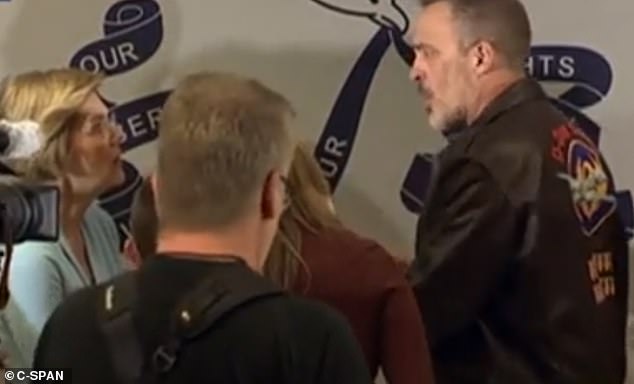 The man angrily confronted Warren, saying people like him who paid for their children’s college were getting ‘screwed’

‘My daughter is in school, I saved all my money just to pay student loans, can I have my money back?’ the man says to Warren.

The senator from Massachusetts replies: ‘Of course not.’

The man then says: ‘So you’re going to pay for people who didn’t save any money, and those of us that did the right thing get screwed?’

He went on: ‘My buddy had fun, bought a car, went on vacation.

‘I saved my money. He made more than I did. I worked a double shift working to get extra money.’

Warren says something inaudible to the man, who in turn accuses the senator of laughing at him.

The senator then shook the man’s hand before he angrily stormed off.

‘I appreciate your time,’ Warren told him before she continued to meet her other supporters on the ‘selfie line.’ 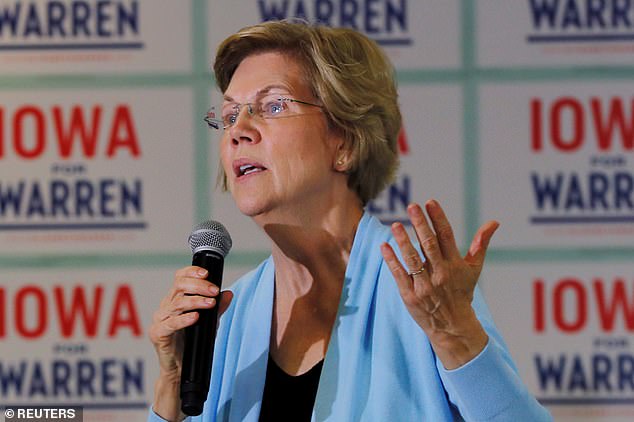 Warren is proposing a plan that would wipe out student loan debt for 95 per cent of borrowers. She is seen above in Grimes, Iowa, on Monday

Last summer, the senator introduced legislation that would wipe out $640billion of student debt.

Under Warren’s plan, student loan borrowers who earn $100,000 or less of gross household income would receive up to $50,000 of debt forgiveness.

Those who earn more than $250,000 would not be eligible to receive any debt forgiveness.

Warren has suggested that the plan be funded by a 2 per cent ‘wealth tax’ on those who have a net worth above $50million.

Senator Bernie Sanders has a competing plan that would forgive all outstanding student loan debt regardless of a borrower’s income.

Warren’s plan would provide debt relief for 95 per cent of those who owe money.

The leading Democrat in the race for the nomination, Joe Biden, announced details of his own proposal to tackle student debt.

Under Biden’s plan, those who earn $25,000 or less per year will not owe any payments on their undergraduate federal student loans and also won’t accrue any interest on those loans. 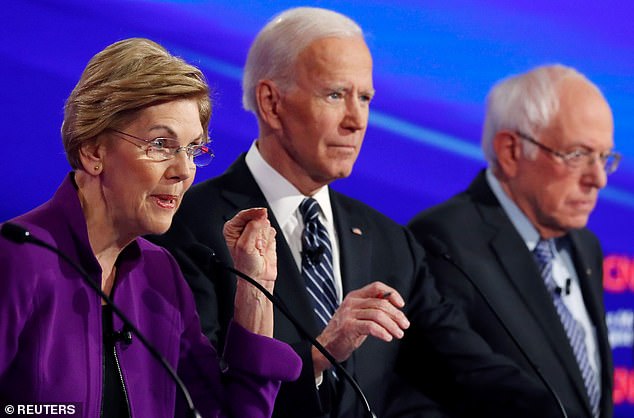 Everyone else would pay 5 per cent of their discretionary income (income minus taxes and essential spending like housing and food) over $25,000 toward their loans.

Those who have kept up on their payments after 20 years would see their debts 100 per cent forgiven, according to the plan.

Biden leads both Warren and Sanders as well as other candidates for the Democratic presidential nomination, though the senator from Vermont and former New York City Mayor Michael Bloomberg are gaining momentum

According to a Reuters/Ipsos national opinion poll released on Thursday, 24 per cent of registered Democrats and independents supported Biden, while 20 per cent backed Sanders and 12 per cent said they would vote for Warren.

Biden, who served two terms with former President Barack Obama, has consistently received the largest amount of support since he entered the race last year.

Yet he has not distanced himself from the pack as a clear front-runner for the nomination.