Treasurer Josh Frydenberg has been ruthlessly mocked online after failing to open a bottle of water during Parliament question time.

The 50-year-old former Oxford and Harvard graduate was caught on camera on the Liberal front bench reaching for the drink on Thursday afternoon.

After intently fumbling with the cap for a good 10 seconds, Mr Frydenberg resigned himself to remaining parched and placed the bottle back down.

Colleague and deputy prime minister Barnaby Joyce could later be seen lending a helping hand by expertly opening the bottle after a much briefer struggle.

Labor treasury spokesperson Jim Chalmers tweeted the clip on Tuesday with the hashtag #Butterfingers – a nickname with which the Opposition has previously tried to paint Mr Frydenberg.

In September, Dr Chalmers issued a scathing attack on the Treasurer’s handling of JobKeeper payments.

‘The problem was that the parliament delegated the implementation of the program entirely to Treasurer Josh Frydenberg – the butterfingers of Australian politics.’ Dr Chalmers said. 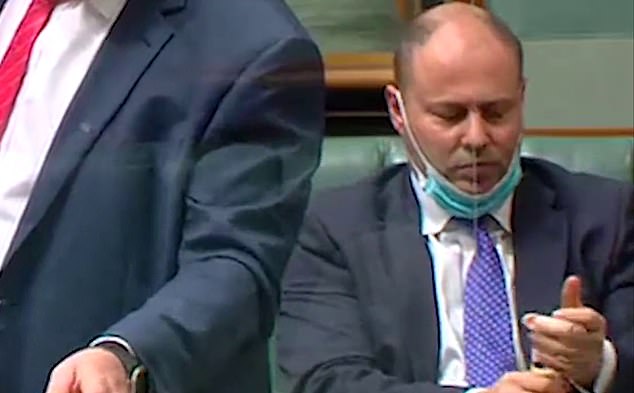 ‘It says so much about the Morrison Government that Gucci and Louis Vuitton pocketed JobKeeper payments they didn’t need because their profits were going up, while working families and small businesses in Western Sydney go without.’

‘He took a very good idea and badly mangled it.’

He added that former PM Paul Keating once labelled another MP who represented Mr Frydenberg’s seat of Kooyong in Melbourne ritzy south-east as a ‘soufflé which wouldn’t rise twice.’

But that Mr Frydenberg was more like ‘whipped cream in a spray can – all noise and fizz but quickly melting away when heat is applied.’ 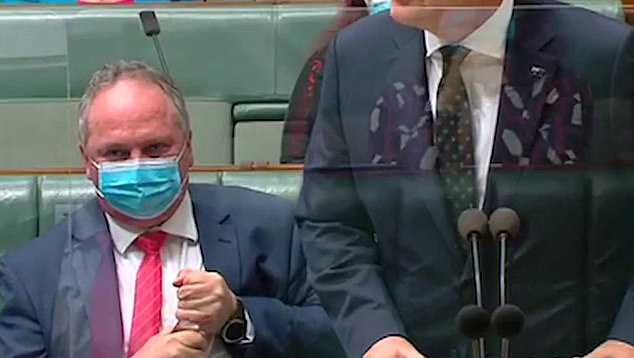 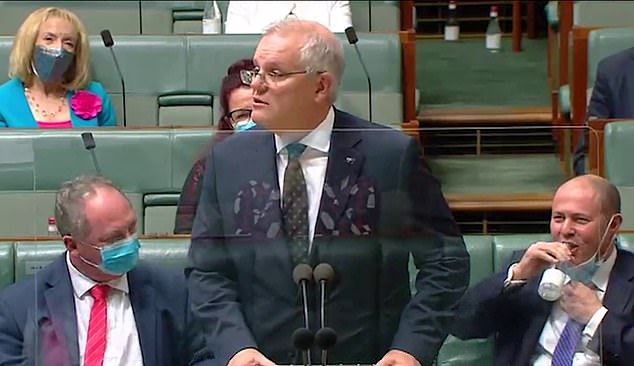 The deputy PM, Prime Minister and Treasuer in Parliament this week (pictured)

‘Trust Barnaby to get it open,’ one said.

‘He was never able to hold onto a budget surplus either,’ another said.

‘This tweet is petty and brilliant,’ added a third. 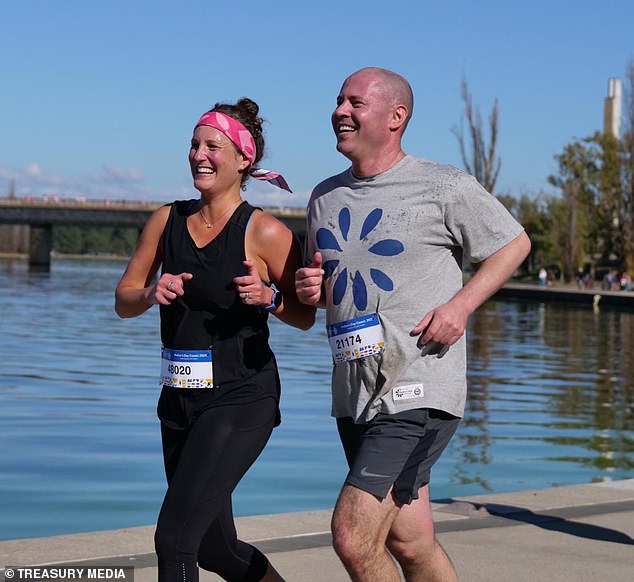