A baby murderer has been caught on camera crying crocodile tears while being arrested for killing his girlfriend’s 12-week-old son.

Kane Mitchell, 32, of St Neots, Cambridgeshire, was jailed for a minimum of 18 years for murdering baby Teddie, who died in hospital on November 11, 2019, after ten days on a life support machine.

A four-week trial at Cambridge Crown Court heard that Teddie had suffered injuries consistent with being ‘gripped hard’, ‘shaken vigorously’, and ‘having his head struck against a hard surface’.

Baby Teddie died with 17 broken ribs, fractures to his skull and collarbone, a bleed on the brain and brain, spinal and eye damage.

And it has been revealed that social services and Cambridgeshire Police had been alerted to concerns from worried neighbours weeks before Teddie died.

Kane Mitchell, 32, was jailed for a minimum of 18 years for murdering baby Teddie. Pictured: Mitchell reacts to being arrested in hospital 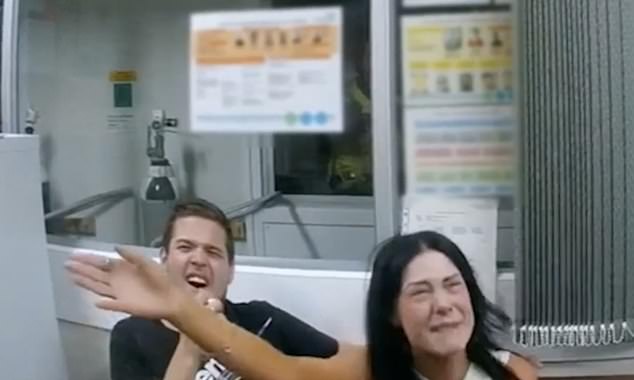 The clip shows the moment Mitchell is arrested while pretending to be a caring father in hospital with baby Teddie. He said: ‘I don’t f***** think so. Oh my god, I would never hurt a baby. I’m not leaving my son’

And footage from just before Mitchell’s arrest shows him holding his victim in hospital while he sobs and says: ‘Come on baby, Daddy’s here.’

Mitchell had been in a relationship with Teddie’s mother, Lucci Smith, 30, for about eight months and the pair lived together.

At 3pm on November 1, 2019, the ambulance service was called to Pattison Court, St Neots, where Teddie was found to be unresponsive and in cardiac arrest.

Smith had left Teddie in the care of Mitchell that day while she did the morning school run.

Harrowing footage from the Channel 4 series 24 Hours in Police Custody has revealed the moment the heartless killer starts spouting crocodile tears as he is arrested.

Detective Inspector Lucy Thompson says of Mitchell, ‘He is completely devoid of any remorse or empathy, that’s the thing I find really hard. It’s all about Kane and not what Teddie’s been through,’ according to The Mirror. 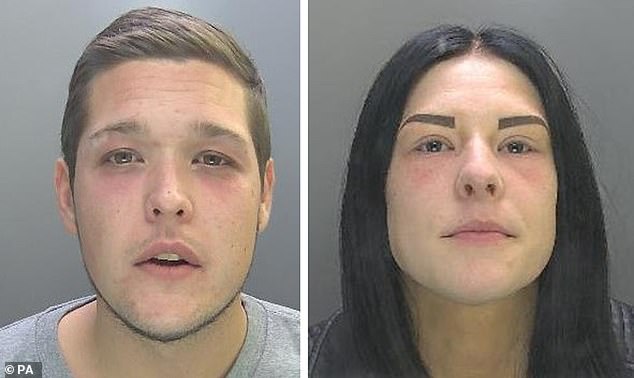 Kane Mitchell (left), who lived with Teddie’s mother Lucci Smith (right) in St Neots, Cambs., was found guilty of murder, after a jury ruled he had inflicted the fatal injuries 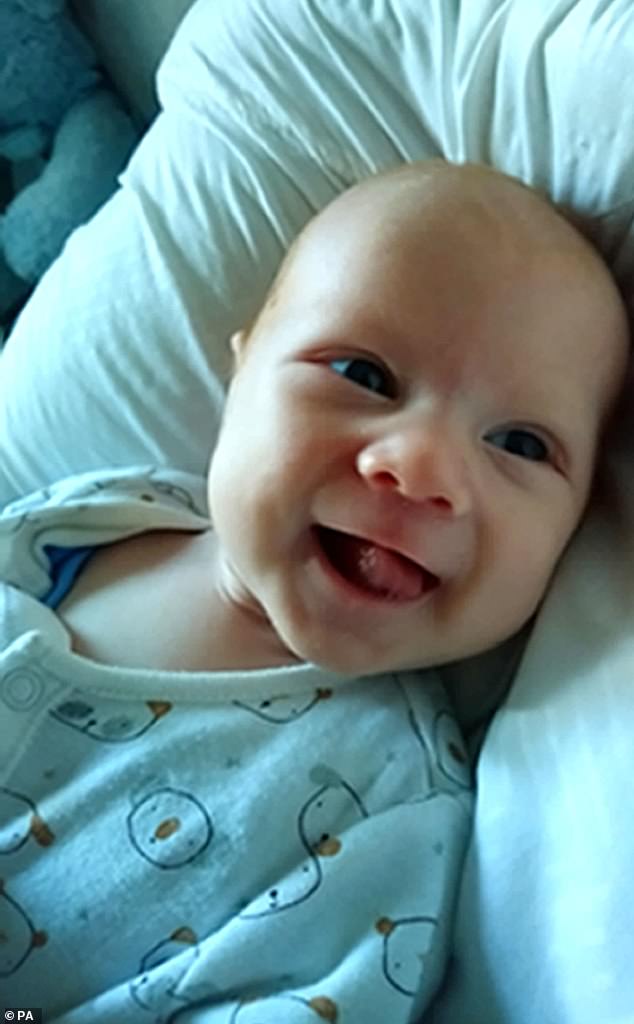 A four-week trial at Cambridge Crown Court heard that Teddie, pictured, had suffered injuries consistent with being ‘gripped hard’, ‘shaken vigorously’, and ‘having his head struck against a hard surface’

The clip shows the moment Mitchell is arrested while pretending to be a caring father in hospital with baby Teddie.

However officers were able to prove Mitchell had killed Teddie because of the types of injuries how they were inflicted.

Teddie died as a result of his fractured skull and lack of oxygen to the brain.

His death is reminiscent of the injuries which killed 16-month-old Star Hobson who was murdered by Savannah Brockhill, 28, the girlfriend of her mother Frankie Smith.

Mrs Justice Lambert said the ‘fatal punch or kick’ to Star caused the toddler to lose half the blood in her body and damaged her internal organs.

Mrs Justice Lambert added: ‘Frankie Smith, it was your role to protect Star from harm, you failed to protect her, allowing her death.’

‘The level of force required to inflict these injuries must have been massive – similar to those forces associated with a road traffic accident.’

Medical staff were concerned about how Teddie received his serious injuries and Mitchell and Smith were both arrested.

During the trial at Cambridge Crown Court, the jury heard how Teddie had suffered weeks of neglect and rough handling during his short life at the hands of Kane Mitchell, who isn’t his biological father.

Channel 4’s new documentary, 24 Hours in Police Custody: Cold to the Touch, probes the council as to what they did in response to concerns from worried neighbours about the safety of the children living in the home Mitchell and Smith lived in.

A council spokesperson told The Express: ‘A serious case review is underway and the findings should be published later this year. We cannot comment further until it is published.’

It comes after the Government announced an inquiry into how social services and local authorities liaise after six-year-old Arthur Labinjo-Hughes was beaten and tortured before being murdered by his stepmother.

Emma Tustin brutally murdered Arthur at her home in Solihull and was sentenced to life in prison with a minimum term of 29 years. Arthur’s father, Thomas Hughes, was jailed for 21 years for manslaughter.

Ms Thompson, who led the investigation into Teddie’s death, added: ‘This was a tragic and terrible case in which an 11-week-old baby lost his life at the hands of a person who should have been there to protect him.

‘Our year-long investigation found that Teddie had suffered multiple horrific injuries during his short life, which neither Mitchell or Smith could account for.

‘Viewers will see the complexities and intricacies of such an emotive and tragic case.

‘The show highlights that we will work tirelessly to bring those responsible for such heinous crimes to justice, no matter what it takes.

‘We hope it will encourage anyone with any concerns for a child’s welfare to come forward and report it to us without delay.’

During the trial, the jury were read statements from neighbours who said they had heard arguments coming from the address on a regular basis and that the household had been unsettled since Mitchell moved in.

During police interview, Mitchell said he believed he was Teddie’s biological father.

However, DNA results following the death revealed he was not.

More footage from the TV programme shows how police officers were constantly monitoring the couple while they were in hospital with Teddie before making their arrests.

Mitchell was sentenced to a minimum of 18 years in jail at Cambridge Crown Court in February.

Smith was found guilty of neglect after she didn’t dial 999 for more than half an hour after her GP urged her to do so.

24 Hours in Police Custody: Cold to the touch will be shown on Channel 4 at 9pm tonight and tomorrow