‘My daughter said it must have been the reindeer’: Stomach-churning moment man pulls down his pants and defecates on a family’s doorstep on Christmas Eve – and steals their five-year-old’s scooter

By Christina Coulter For Dailymail.Com

A Colorado family’s two young girls thought Santa’s reindeer left the droppings they found on their doorstep Christmas morning, but the family’s Ring doorbell camera laid bare the less palatable reality that an addled thief had dropped trou and defecated on their porch before taking off with the five-year-old’s scooter.

The Aurora mother, who wished to remain anonymous, posted the moment the deranged late-night visitor used her porch as his personal toilet, hoping someone would recognize him and ‘he is so embarrassed he will never do that again.’

‘Hopefully if his friends see or, you know, family members they can get on him and tell him like that was just disgusting and wrong,’  the homeowner told FOX 31.

In footage from her Ring doorbell, the man can be seen sprinting toward the house as he unbuttons his fly.

In footage from her Ring doorbell footage, the man can be seen beelining toward the house as he unbuttons his fly 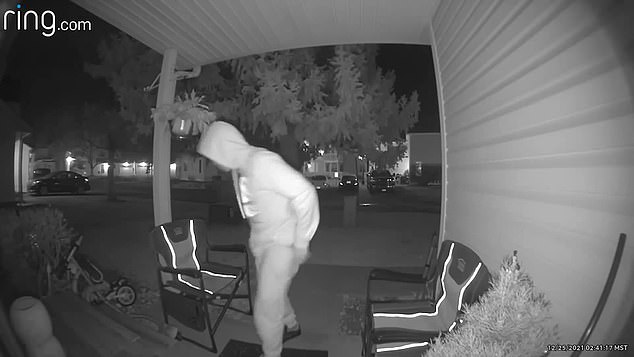 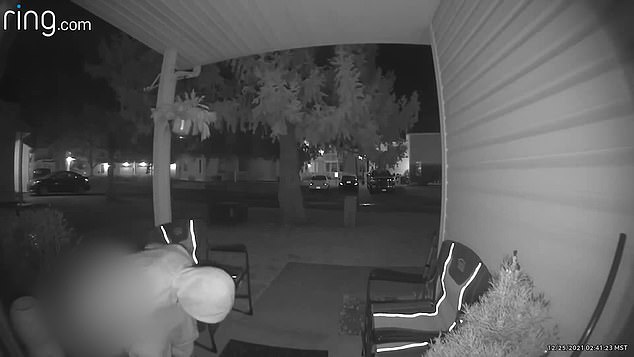 ‘I’ve never seen that guy before – it looked like he directly just came right to my house. Like he had a problem with me or something,’ the mother said.

He glances around briefly before squatting behind a lawn chair and doing his dirty business.

Then, he moves to the other side of the chair with his pants still down, and uses the fabric of the seat to wipe himself before pulling his pants back up.

The mother and her children found the unwanted surprise after opening their presents the next morning. The mom turned to the Ring footage to reveal their nightmare before Christmas.

‘My girls were laying in bed, way past bed time, waiting to hear Santa and his reindeer land on the roof. My 5-year-old went outside the next morning and saw it, she instantly told me not to worry, it had to of been the reindeer that pooped outside,’ shared the mother.

‘I wish she was right but unfortunately we had a nasty mess to clean up.’ 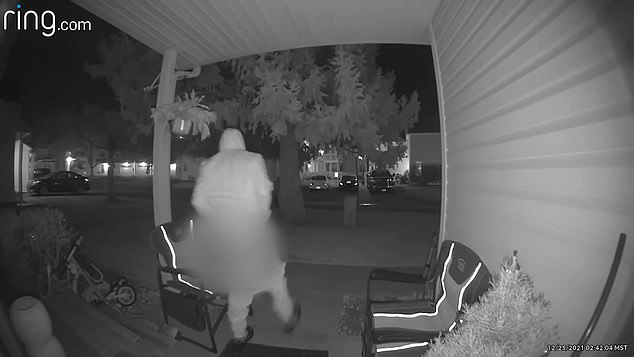 With his pants still down, the man sidles around a chair on the property 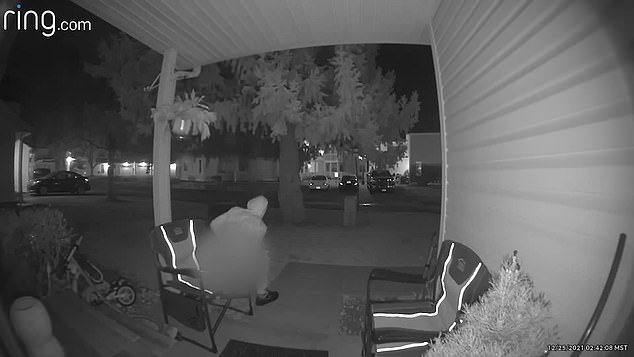 Then, the man rubs up against the chair, using it to wipe himself 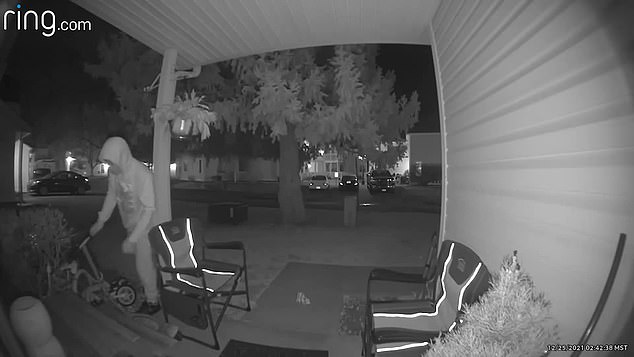 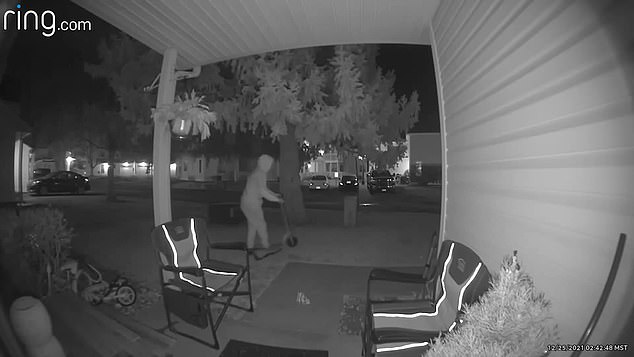 He walks away, pushing the scooter and leaving his mess behind

The pooping bandit then can be seen stepping around his own mess to grab a scooter belonging to the woman’s 5-year-old daughter and racing away from the scene of the crime.

Now, after the putrid Christmas mystery, the Colorado mother said she will be on ‘high alert’ for any more surprise visits.

‘I’ll definitely have my guard up and make sure my phone is right there, so if I hear my motion [sensor] go off again I’ll be able to call immediately,’ she told Fox 31.