The shocking moment a topless man left streaks of blood over a supermarket floor before being arrested by police has been caught on video.

Stunned shoppers watched on in horror as two police officers struggled to subdue the man at a Countdown store in central Auckland on New Zealand’s north island on Saturday evening.

Footage taken by a passer-by also showed a woman attempt to intervene in the arrest before physically lashing out at one of the policemen.

Police said the man had fled into the Victoria Street West supermarket and fallen over after police had found him allegedly in breach of his conditions about 7.45pm.

The bystander who filmed the chaotic scenes inside the CBD grocery store, Azar Mammadov, said police had to chase the man around the store to catch him.

‘Two officers tried to contain him on the floor, he was resisting, screaming and then a female came and started attacking the police officers physically. It was a battle,’ the witness told the New Zealand Herald.

The bystander added though blood seen smeared across the supermarket floor was not a result of police restraining the half-naked man, but from when the man fell over.

Mr Mammadov said the man was lucky he had not been in the same situation with police in the US.

‘I’m from the United States – for us, that person would have been dead,’ he said. 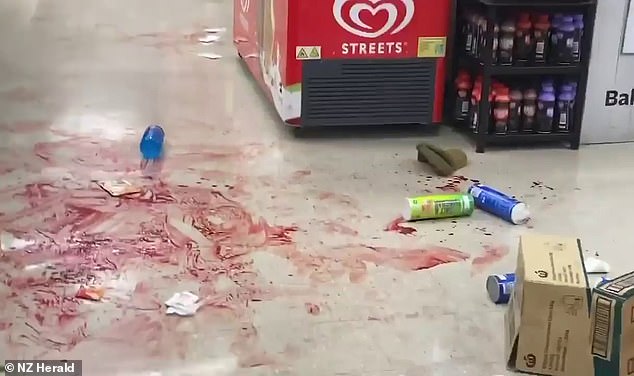 A witness said blood smeared across the supermarket floor was the result of the man falling over, not from police restraining him

‘But the way they treated him and managed the situation was very impressive -whatever training they had.’

New Zealand Police said the man had first been found on Victoria Street West, before fleeing to the supermarket.

‘It appears they have fallen over and required medical treatment and were taken to hospital,’ a spokesperson for NZ Police said.

The Countdown store was then closed for about 30 minutes as the blood was cleaned, Stuff reported.

‘The person caused a scene in the store and, unfortunately, fell while running erratically around the supermarket,’ a Countdown spokesperson said.