Confronting footage shows a police officer throwing a man headfirst into the ground at a Melbourne train station, leaving him ‘unconscious with blood and urine everywhere’.

Video filmed at Flinders Street Station in the city’s CBD showed the man talking to other officers when another policeman approached from behind.

The officer then grabbed the man by the shoulders before throwing him against the hard tile floor, sending his headphones flying across the station concourse.

‘This poor guy was calm, he was just talking to the police,’ the video’s caption read.

‘You can see it it in the video then he gets thrown to the ground. You can hear his face hit the tiles. He was unconscious, blood and urine everywhere.’

The video, which has been widely shared on Facebook and Twitter, emerged online as thousands of protesters staged four consecutive days of anti-vaxxer demonstrations on the streets of the city.

Victoria Police Chief Commissioner Shane Patton said police were aware of the footage and investigating whether the officer’s actions were appropriate.

‘We’ll investigate it with an open mind and look at it to determine whether they’ve acted appropriately,’ he told 3AW.

‘I don’t know what the full circumstances are. 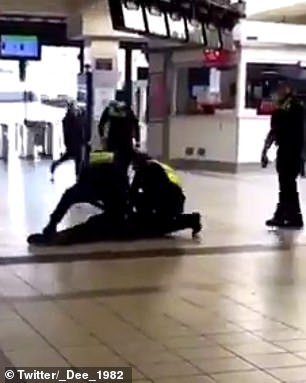 ‘There is always a before and after with these matters, and context, and I think that’s important.’

Mr Patton said police had been dealing with a ‘dynamic, threatening and frightening’ environment in recent days as officers battled to contain the violent rallies on the streets of the Victorian capital.

‘They have been brilliant – I couldn’t be prouder of them,’ he said.

On Wednesday 400 protesters stormed Victoria’s Shrine of Remembrance to rally against vaccine mandates and the shutdown of the construction industry.

The mob chanted ‘lest we forget’ as they stood in front of the monument built to honour the state’s men and women who served in World War I during in a tense stand off with police. 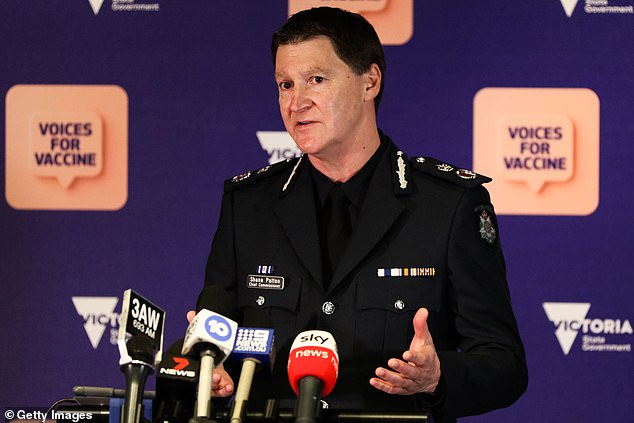 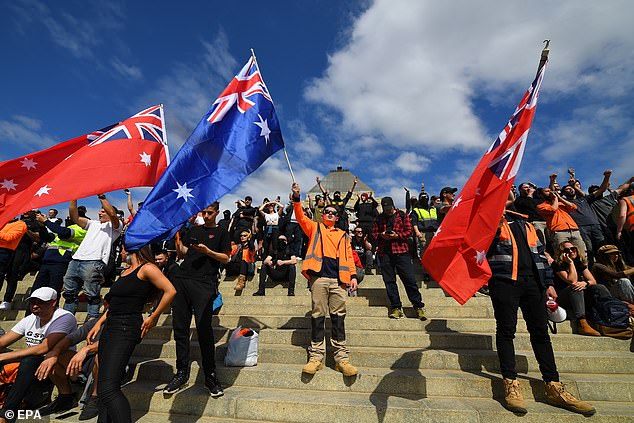 The video emerged online after thousands of protesters staged three consecutive days of anti-vaxxer demonstrations on the streets of Melbourne. Pictured are demonstrators at the city’s Shine of Remembrance

Chanting ‘every day’ from the Shrine of Remembrance, hundreds without masks – some still wearing high-visibility clothing – marched through the city to the war memorial.

Police made 215 arrests while two officers suffered head injuries after bottles were thrown at them.

‘It was completely disrespectful that the crowd ended up at the shrine, which is such hallowed ground in this great city,’ Victoria Police Deputy Commissioner Ross Guenther.

‘Our general observation from the people on the ground was that there weren’t as many tradies involved,’ Mr Guenther said.