This is the amusing moment a monkey refuses bananas – before accepting a handful of crisps in Thailand.

A group of people were driving along the picturesque Bang Saen beach, in Chon Buri, Thailand, when the uninvited guest swooped in to their window.

Footage shows the monkey prop itself on the edge of the vehicle’s window and holds one of his furry paws inside.

A group were driving along the picturesque Bang Saen beach, in Chon Buri, Thailand, when an uninvited monkey swooped on to the side of the window. In the clip, they refuse the offer of bananas from a car passenger and aggressively throw them on to the seat (pictured)

One of the passengers takes a slice of cucumber from their friend and offers it to the animal.

Appearing far from impressed, the monkey picks it up tentatively and immediately chucks it away in disregard. 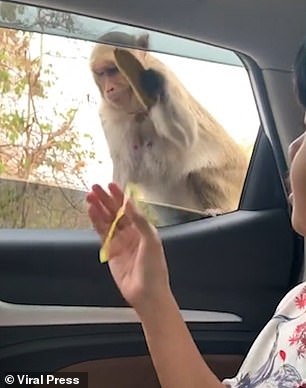 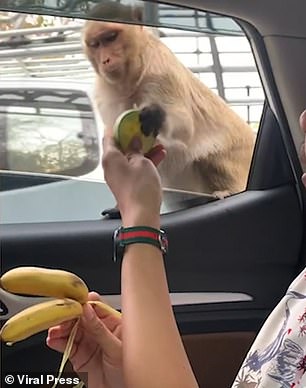 The uninvited animal appears furious at the offer of healthy snacks

The passenger persists with feeding the furry animal’s appetite and snaps off a banana.

But in a bizarre turn of events, the food, which is usually a staple of a monkey’s diet, aggressively chucks it on to the car seat without a moment’s thought.

His message appears lost in translation and he tries handing him another banana.

He stays balanced on the side of the car, despite not getting what he wants, in the clip from January 11. 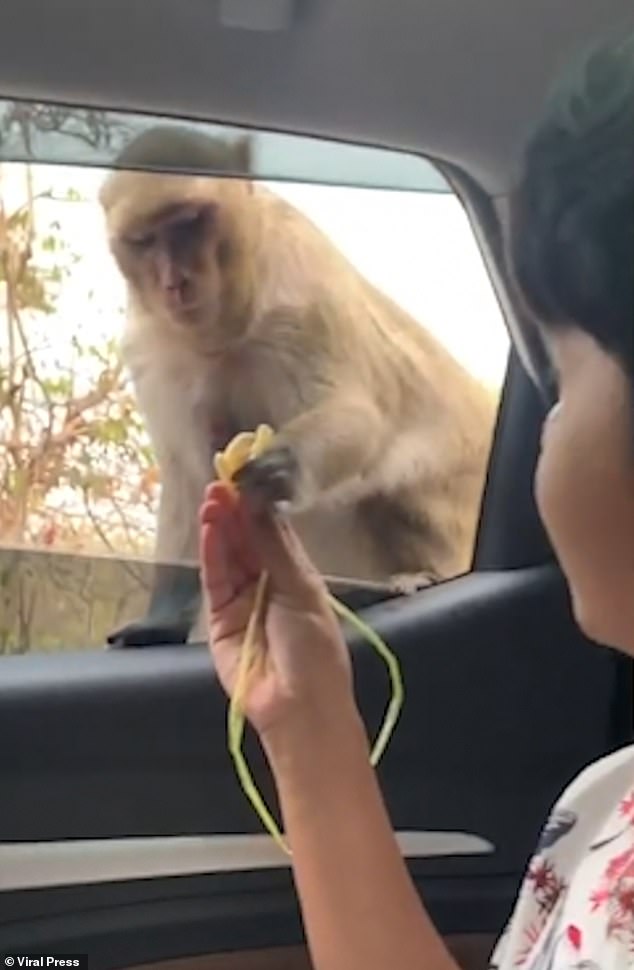 The monkey happily takes crisps from the passenger’s hand in the clip. He gobbles up the snacks

The animal snatches a handful of crisps when they are offered to him.

He instantly gobbles the crisps, which appear to be French Fries, while the passenger looks at the camera with a smug expression on his face.

Katharine Milton, who studied the diets of primates for decades, claimed wild monkeys ‘never encounter bananas’ unless they are in a human habitat.

The fruit is a ‘cultivated domesticated plant’ and would not be encountered like humans in supermarkets, she told Business Insider.