A 5-year-old cheetah named Echo delivered four cubs at the Smithsonian’s National Zoo as the amazing moment was watched on webcam by animal care staff.

Zoo staff keeping watching on the webcam are now giving the mother a chance to bond with her cubs. Their genders won’t be known until the staff can get a closer look.

Echo, a 5-year-old cheetah at the National Zoo, is seen in webcam footage as she begins to deliver 1 of four cubs Thursday 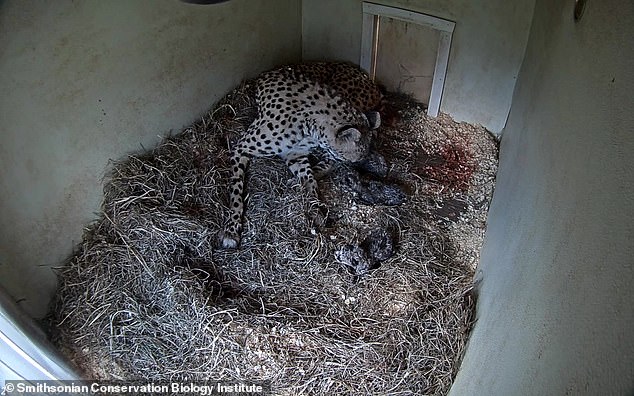 The first-time mom began delivering her babies just after 11 a.m. Echo brought the last of her cubs into the world about 2:33 p.m.

The babies were fathered by a 4-year-old cheetah named Scott that was paired and bred with Echo in January, Smithsonian Magazine reports.

The Front Royal, Virginia zoo, also known as the Smithsonian’s Conservation Biology Institute, has had 14 litters of cheetah cubs, including the latest, since 2007.

‘It’s thrilling and humbling to witness something as special as an animal birth,’ said National Zoo director Steve Monfort in a statement.

‘I’m eager to watch the newborn cubs in their early days. During this extremely tumultuous and isolating time, we want the new cheetah cam and all our live animal webcams to provide much needed moments of relief and inspiration from our natural world.’ 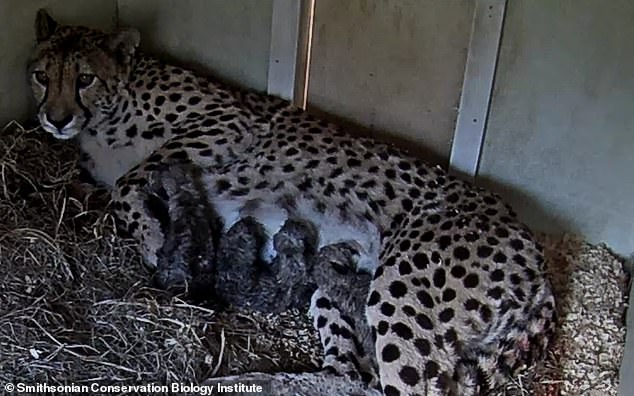 Echo is pictured as she begins to bond with her babies. Their genders won’t be known until animal care staff have a closer look

Adrienne Crosier, cheetah reproductive biologist at the zoo says Echo was raised by her own mother without human intervention, which leaves the staff confident in her maternal instincts.

‘There’s a good chance Echo has learned cheetah parenting behaviors from the best teacher—her mother,’ says Crosier in a statement.

Each cub will provide researchers insight into the species. The zoo is part of the Cheetah Breeding Center Coalition, which represents ten cheetah breeding centers in the U.S.

Anyone can also watch Echo and her cubs on Cheetah Cub Cam, although zoo officials note that mother and babies may have moved and not always be visible in the live stream.