This is the moment a man who tried to request topless pictures of a 14-year-old girl  and sent an explicit image was confronted by paedophile hunters on camera.

Martin Kirkwood began chatting to who he believed was an underage teen girl called Louise on social media website in May last year before arranging to meet.

He asked what he thought was a minor to touch his penis and called her ‘sexy’ after being told the person he was speaking to was at school.

The profile was in fact a decoy set up by Guardians of the North, who expose adults looking for sex with children.

Jolyn Perks, prosecuting, told Newcastle Crown Court how the chat did not turn sexual until Kirkwood contacted ‘Louise’ again in February this year. 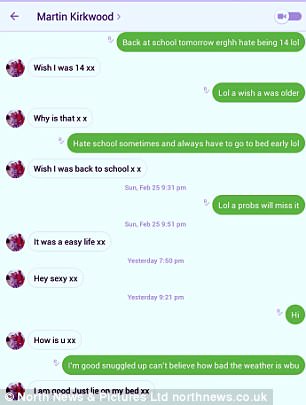 The decoy responded by telling Kirkwood: ‘I’m back at school tomorrow, I hate being 14.’

Mr Perks said: ‘The defendant began to refer to the witness as sexy, that he would like to be in bed with her and invited her to talk dirty with him.

‘He said “have you felt a willy before?” with some kisses attached to it, “come and feel mine”.’ 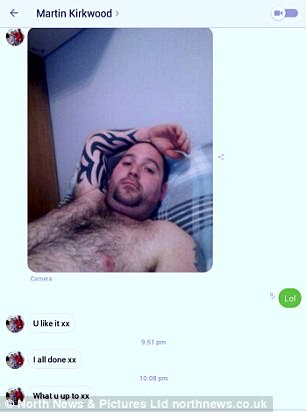 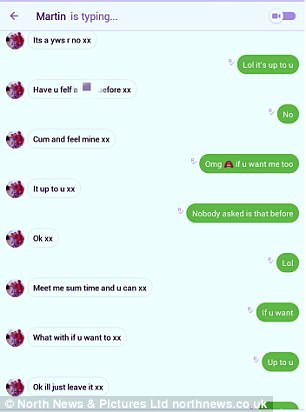 ‘He asked her who had access to her phone and told her not to tell anyone. He made reference to the photograph he sent of his penis, asked if she liked it and if she wanted to see one in real life.’

Mr Perks said Kirkwood organised to meet her on March 4 this year, stating that when she met him she could touch his penis. But he then cancelled the meeting and told her they would have to rearrange. 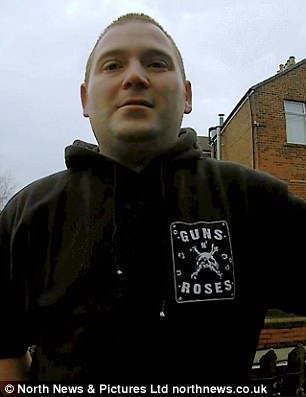 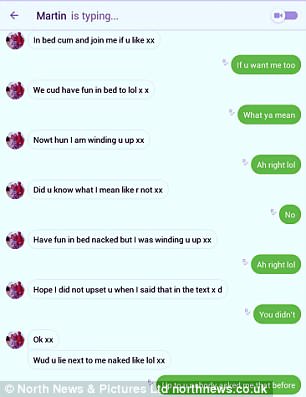 So Guardians of the North members attended his address on March 6 to confront him.

They contacted the police and Kirkwood was arrested by officers. Kirkwood, of Eden Terrace, Sunderland, admitted attempting to engage in sexual conversation with a child between February 23, 2018 and March 5, 2018.

Alec Burns, defending, told the court: ‘He thought about his own daughter and how anyone meeting her would be and that’s why he thought better of it.

‘He has been unable to work as he felt it was wrong that his employer should be embarrassed by his offences. He went and resigned to save them the embarrassment.

‘He has considerable difficulties. He has realised how appalling this could be for a child.’ 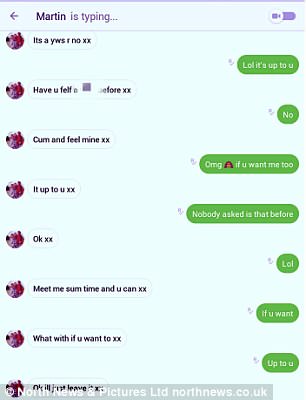 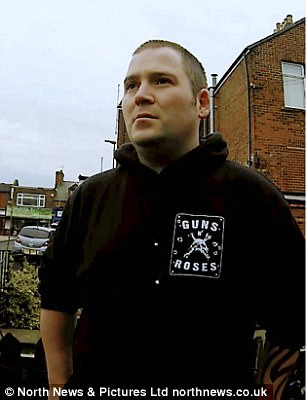 Mr Recorder Wood told Kirkwood: ‘You again contacted Louise on the internet and she responded to you, reminded you, that she was a young person going back to school and at that stage your contact became criminal and was wholly and grossly inappropriate.

‘Guardians of the North realised you were committing a sexual offence and they came around, as happens in these offences, to your home address.’ 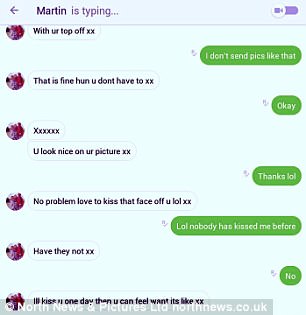 He told Kirkwood ‘great harm’ could have been caused had there been no intervention. Mr Recorder Wood sentenced Kirkwood to six months in prison suspended for two years with rehabilitation.

Kirkwood was also ordered to sign the sex offenders register and abide by a sexual harm prevention order, both for seven years.