When the rebel camp went into the party room meeting on Friday, they expected to exit with Peter Dutton as Australia’s next Prime Minister.

The history books will show the former home affairs minister made a grave miscalculation, as Treasurer Scott Morrison swept up 45 votes compared to Mr Dutton’s 40.

Despite the loss, Prime Minister Morrison has offered Mr Dutton a position within his ministry.

After a week-long saga that saw Mr Dutton attempt to rid Malcolm Turnbull of his leadership position, both he and his supporters were confident they held the majority to push him into the top spot.

However, when the three-way vote between Mr Dutton, Mr Morrison and Minister for Foreign Affairs Julie Bishop came to fruition, the rebel camp discovered some of their supporters had changed their minds over the risk of another High Court scandal.

On Thursday night, Mr Dutton and his supporters scrambled to obtain 40 of the 43 signatures Mr Turnbull demanded in order for the party room meeting to go ahead. 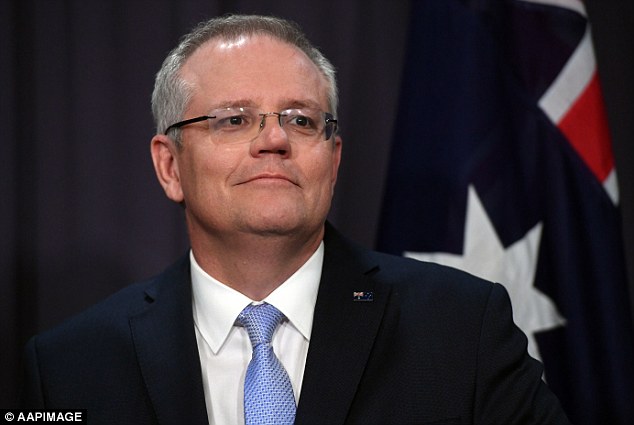 The history books will show the former home affairs minister made a grave miscalculation, as Treasurer Scott Morrison (pictured) swept up 45 votes compared to Mr Dutton’s 40

With just three votes left, Mr Dutton and his team were confident they would be able to acquire them the following morning.

Yet, the camp came to a standstill on Friday morning when Solicitor-General Stephen Donaghue QC informed Mr Dutton that there was a ‘risk’ to his eligibility.

It was believed that Mr Dutton may have been seen as ‘ineligible’ by the High Court under section 44 of the Constitution, as his family trust owns two childcare centres in Brisbane.

Concerns were raised among the MPs who pledged their support for Mr Dutton, as they didn’t want to face the risk of another High Court crisis.

This saw some of them sway their allegiance and vote for Scott Morrison, Australia’s next – and 30th – Prime Minister.

Despite Mr Dutton’s agitating, destabilising and campaigning against the Turnbull leadership, he walks away from the coup a little better off than how he entered it.

The result came as an embarrassment to Mr Dutton, who had been just a few votes a away from defeating Mr Turnbull in a spill just days earlier.

The 43 politicians who signed a petition forcing the party room meeting were revealed on Friday night. 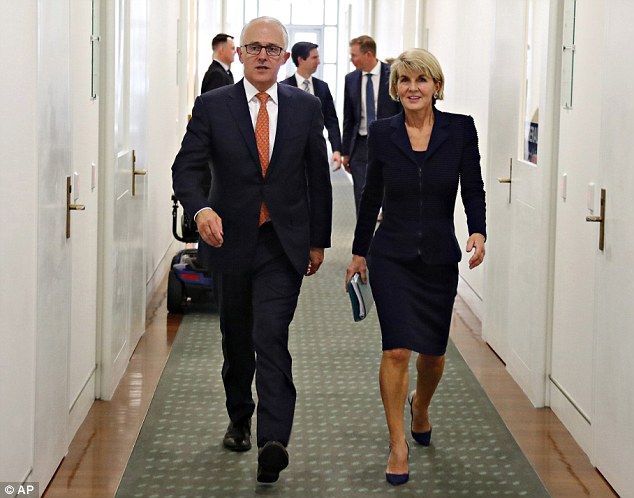 Former Prime Minister Malcolm Turnbull (left) and Julie Bishop (right) who threw her hat in the ring to become Prime Minister on Friday, are seen smiling as they leave the party room meeting

While many feared backlash from going behind Malcolm Turnbull’s back to put their name to the petition, the former PM said he wouldn’t call the meeting without 43 names on paper.

Some opted to scribble a little message next to their names, like Karen Andrews who wrote ‘because this has to be resolved’ and Scott Buchholz who wrote ‘I support the office of the PM’.

Warren Entsch reportedly only agreed to sign the petition because his signature was needed to make up the 43 names.

Mr Turnbull was careful to dot his I’s and cross his T’s when it came to verifying the validity of each signature, ordering party whip Nola Marino to phone each signatory to ensure they had signed the petition.

‘These are momentous times and it’s important that people are accountable for what they’re doing,’ he said. 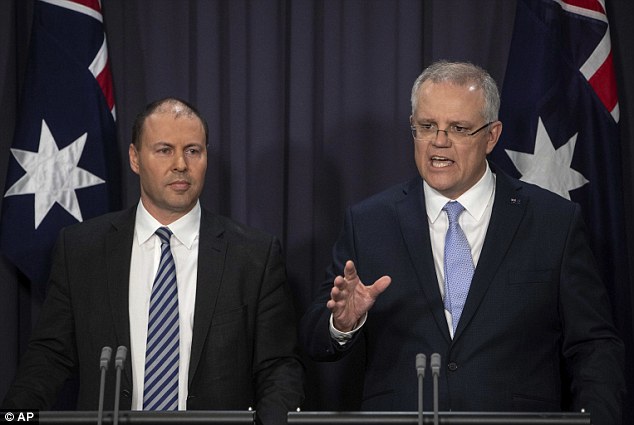 Julie Bishop, who is far more popular with Australian voters than either Mr Morrison or Mr Dutton, may emerge from the leadership spill in a worse position.

Despite not actively supporting the coup, she put her name in the ring for the vacant position at the party room meeting, but was the first to be knocked out.

Ms Bishop, who is expected to retire from Parliament at the next election, may lose her prestigious and high-profile position as Foreign Minister because of the spill.

Tony Abbott’s dreams of returning to the frontbench may well also be crushed as a result of Mr Morrison’s win.

Mr Morrison – and his new deputy party leader Josh Frydenberg – could yet come out of the debacle unscathed politically, largely because neither campaigned against Mr Turnbull.

Despite not engaging in the action to sign the petition against Malcolm Turnbull, the two men appear to have gained the most from those 43 powerful signatures.

However, polls show that Mr Morrison’s premiership could well be short-lived, with Labor leader Bill Shorten predicted to trounce the former treasurer in next year’s election.

* Peter Dutton says he will quit cabinet if he gets to a point where he can’t agree with government policy.

* Malcolm Turnbull weighs up significant changes to the National Energy Guarantee amid speculation about his leadership, including dumping the legislated emissions target.

* Dutton tweets his support for the prime minister and the policies of the government.

* Cabinet meets at parliament to discuss changes to energy policy.

* A Fairfax/Ipsos poll shows the coalition’s primary vote has dropped from 39 to 33 in a month and Labor leads the coalition 55-45 per cent on a two-party preferred basis.

* The PM drops the 26 per cent emissions cut target from NEG legislation.

* Turnbull says Dutton has given ‘absolute support’ to him.

* Turnbull calls a spill and is challenged by Dutton, who loses 48-35.

* A slew of ministers offer resignations but Turnbull only accepts Concetta Fierravanti-Wells and Dutton.

* Dutton refuses to rule out a second challenge, launching a media campaign calling for a royal commission into fuel and energy prices and the scrapping of the GST from electricity prices.

* Turnbull, flanked by Treasurer Scott Morrison and Finance Minister Mathias Cormann, dumps corporate tax cuts after the plan was voted down in the Senate.

* A petition to force a Liberal partyroom meeting is circulated.

* Cormann, Communications Minister Mitch Fifield and Jobs Minister Michaelia Cash visit Turnbull to tell him he no longer has the support of the majority of the party room.

* Turnbull accepts the resignation of his assistant minister James McGrath.

* Cormann, Fifield and Cash again visit the prime minister to tell him he’s lost support. They urge him to call a partyroom meeting.

* Dutton demands a second leadership spill after telling Turnbull he has the support to become PM.

* Cormann, Fifield and Cash pull their support for Turnbull and resign from cabinet.

* Turnbull says Liberal MPs need to see the advice from the solicitor-general on the eligibility of Dutton after reports he could be in breach of the constitution over his stake in two childcare centres.

* If the advice gives Dutton the all clear, Turnbull will hold a partyroom meeting. He will then move a spill motion and quit parliament if it succeeds.

* The Australian dollar endured a rough night coming into Friday morning, falling 1.4 per cent to US72.48c.

* Queensland Liberal Warren Entsch indicated he would be the 43rd signature, but only if it was needed. He refused to sign the petition but was willing add his name if it will break the deadlock.

* A party room meeting was called for midday for a three-way race between Peter Dutton, Scott Morrison and Julie Bishop.

* It is revealed Dutton’s electorate did not support his push against Turnbull.

* Dutton gives the petition to Turnbull and gets all 43 names verified.

* Leadership spill is called, Turnbull says he will step aside and quit parliament.

* It is announced that Josh Frydenberg becines deputy Liberal leader.

Mr Turnbull previously acknowledged politics was a tough business, but slammed right-wing bullies within and outside Parliament who undermined his leadership.

‘I think what we’re witnessing, what we have witnessed at the moment is a very deliberate effort to pull the Liberal Party further to the right. And that’s been stated by the number of people who have been involved in this,’ he said.

The comment has been widely interpreted as an attack on former prime minister Mr Abbott and his acolytes, as well as elements of the Press.

‘Australians will be rightly appalled by what they’re witnessing in their nation’s parliament today and in the course of this week,’ Mr Turnbull said in Canberra on Thursday.

Mr Turnbull said the public would be ‘crying out for an election’ once the dust settled.

He said a ‘form of madness’ had taken over those agitating for a leadership change.

The unrest is the latest chapter in a turbulent decade for Australian politics, which has frequently descended into squabbling that has alienated voters.

No leader has managed to serve out a full term since former Prime Minister John Howard lost the 2007 election, in a remarkable revolving door at Canberra’s parliament house.

One minister was so disillusioned with the push to oust Turnbull that he took to Twitter to apologise to the Australian people.

‘Australia. We owe you an apology. I’m sorry. You deserve better than many of the things our Federal Parliament has served up to you for the past 10 years,’ wrote Nationals MP Darren Chester, whose party is in coalition with the Liberals.

SCOTT MORRISON: ALL YOU NEED TO KNOW ABOUT AUSTRALIA’S NEXT PRIME MINISTER 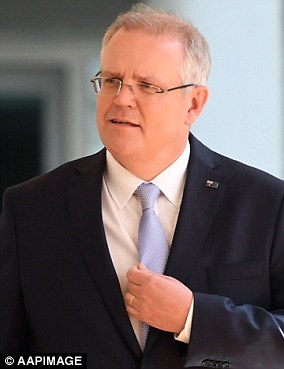 Scott Morrison was elected by the ruling Liberal Party to become Australia’s next – and 30th – prime minister.

The 50-year-old overcame Peter Dutton, who was the key challenger to incumbent PM Malcolm Turnbull, to win a leadership ballot by 45 votes to 40.

He is expected to be sworn in by Governor-General Peter Cosgrove after Mr Turnbull officially resigns.

Born in Sydney in 1968, Mr Morrison has been Australia’s Treasurer – the equivalent of the UK’s Chancellor – since September 2015.

He was first elected as an MP in 2007 when he won the seat of Cook, located in the southern suburbs of Sydney.

He was appointed to the frontbench after the 2010 election, before being promoted to the Cabinet by Tony Abbott three years later, taking on the role of Minister for Immigration and Border Protection.

It was credited with eliminating maritime arrivals – but also attracted criticism from refugee activists and human rights groups.

A short stint as Minister for Social Services between 2014 and 2015 followed, before Mr Turnbull appointed him to the prize position of Treasurer after taking over from Mr Abbott as PM in 2015.

After last year’s referendum on same-sex marriage, Mr Morrison, a church-goer, said he would back a new ‘religious protections’ bill.

Before beginning a career in politics, Mr Morrison worked in tourism and was managing director of Tourism Australia between 2004 and 2006.

Better-known as ScoMo, he lives in Sutherland in Sydney’s south with his wife Jenny and their two young daughters. He supports the NRL Cronulla Sutherland Sharks, and says he is a fan of Australian musician Tina Arena.