This is the moment an experienced pilot narrowly avoided a brush with death after his engine cut out mid-flight.

Chad Barber was performing a series of twists and spins above the ground in Coral Springs, Florida, when his engine cut out.

The 26-year-old aviation enthusiast, who was trying to thrust the plane into a vertical line, was left in a state of disbelief when he noticed the propeller at the front of the aircraft had stopped spinning and his plane was nose-diving towards the ground.

Mr Barber, who admits his ‘Pitts Plane’ engine had never cut out before, desperately tries to level the vessel in an attempt to buy some time before trying to get the engine started again.

After a series of failed attempts, Mr Barber appears to accept his fate and begins to locate a potential crash landing spot, navigating away from the town below and towards a gravel dirt track.

Mr Barber, who admits that his ‘Pitts Plane’ engine had never cut out before, desperately tries to level the vessel in an attempt to buy some time before trying to get the engine started again

Finally, with one last ditch attempt to restart the engine, Mr Barber pulls hard at the lever in front of him with the plane just a few feet from the ground.

Miraculously, the propeller begins to spin again, giving him enough time to swoop upwards into the air and avoid a potentially fatal crash – with Mr Barber letting out an audible sigh of relief.

A relieved Chad, the founder of www.barberaviation.aero, said: ‘I realised what had happened immediately at the top of the figure, as the engine began to splutter and quit.

‘The bottom line is I’d lost too much fuel and the engine could no longer pick up the fuel line to scavenge enough from the tank to keep it running.

‘My initial reaction was denial, because I heard the engine splutter before, but it’s never cut out. The plane begins to plunge towards the ground in Coral Springs, Florida, after the engine cuts out

‘When I finally accepted what was happening, I did what I always knew: Fly the plane first – everything after that is just a troubleshooting problem.

‘I would like to say all my years of flying had prepared me for such an occasion, but you can’t realistically prepare for the unexpected, because it’s just that: Unexpected.

‘Fortunately for me, I did remain calm, which really helped in my decision-making.

‘I focused on flying and getting the plane in a suitable area to land.

‘I hope it never happens to me, or anyone else – it made me realise the real risks you can take in all aspects of life. 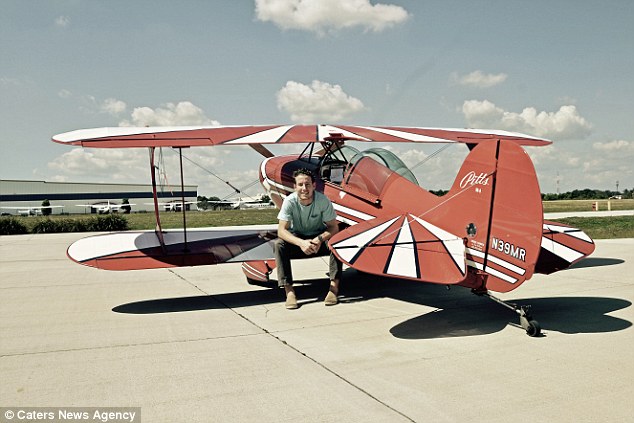