Video shows the touching scene when a crowd of high school basketball players ran onto the court to celebrate the moment their teammate scored the final shot of a game in Minnesota as the buzzer sounds.

Mason Doherty, who has Down Syndrome, entered play towards the end of his first varsity game and scored a three-pointer after several shot attempts and some help from teammates, Fox 9 reported.

Then Doherty, a senior guard, hit a shot from the baseline at the buzzer in the game between Minnehaha Academy and St. Peter on Saturday.

Mason Doherty, a senior guard who has Down Syndrome, entered play in the second half of his first varsity game 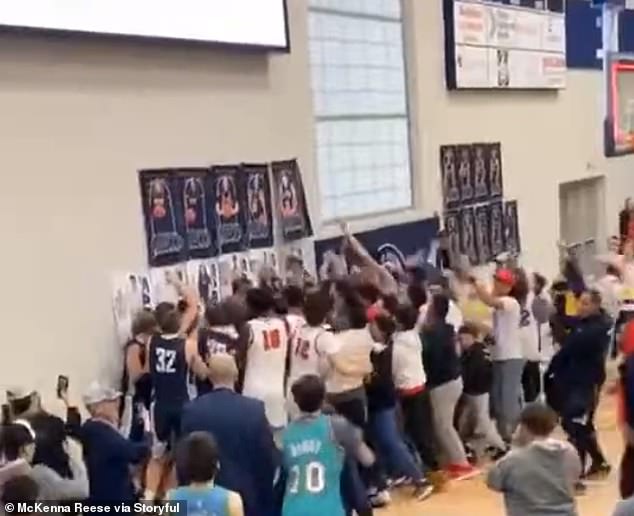 Although Minnehaha Academy beat St. Peter 95-66, Doherty was commended by his fellow players and they rushed the court to celebrate with him 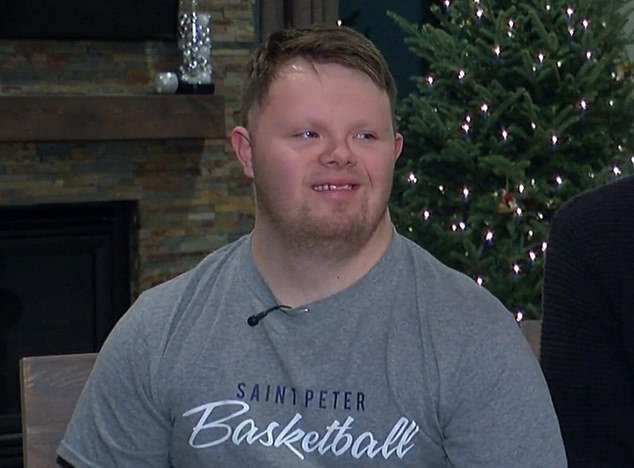 The buzzer can be heard sounding before players from both teams flock to congratulate him. Video posted to Twitter showed the crowd roaring as Doherty hit the shot.

Although Minnehaha Academy beat St. Peter 95-66, Doherty was commended by his fellow players.

Jalen Suggs, a top Minnehaha player, posed for pictures with Mason at the game.

He wrote in a tweet: ‘This is what sports is about! We’ve had a lot of good plays this season and I’ve seen even more from other teams. But this here, nothing this season tops what my guy Mason did today!!’

‘To be there personally, not going to lie, that’s high up on my sports moments that I’ve experienced in my young 18 years of life. To see how happy he was and how happy the entire building was, it was just a great atmosphere, a great vibe in there, and to MVP Mason, that was a great shot man.’

Mason’s mom, Laura, told CBS Minnesota: ‘This is what he does. He shoots the threes, but he’s always shot the threes.’

‘It’s overwhelming sometimes to see the support, and everybody rallies for him,’ she said.

Josh Johnson, a teammate of Doherty, told CBS Minnesota: ‘At practice, all he does is run straight to the three-point line. It’s every day. Amazing. It’s a great experience for every single one of these players on our team.’

‘They give up their precious time to get him the ball, to let him shine.’