When Australian batsman David Warner and Pakistan quick Shaheen Shah Afridi were embroiled in a tense standoff at the crease in Lahore, plenty of sports fans didn’t know what to think.

Tensions looked certain to erupt at stumps on Wednesday – only for the pair to both burst out in laughter.

The ‘incident’ – which saw Afridi tower over the often combative Warner after the final ball of the day – sums up the friendly spirit in which the series has been played in Pakistan.

Neither team is prepared to give an inch and despite draws in both previous Tests, the on-field action at times has been outstanding.

The bromance between Warner and the considerably taller Afridi lit up social media. 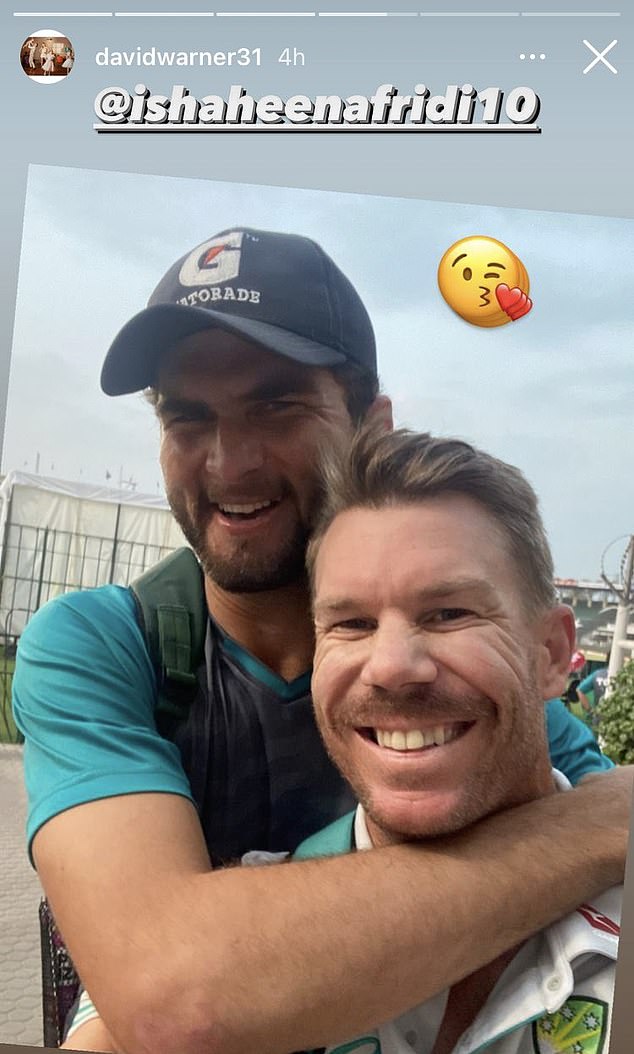 Plenty of cricket fans felt the exchange initially had shades of feared West Indian quick Curtly Ambrose standing over Steve Waugh in the Caribbean back in 1995.

That unforgettable moment saw Ambrose dragged away by his teammates after the Australian skipper stood up to the legendary paceman and delivered some choice words.

Former Australian quick Michael Kasprowicz, in commentary at the Gaddafi Stadium, said the rivals coming together in Pakistan sums up the feelgood relations between the two fiercely competitive cricket nations.

‘This is how great this series has been: the short and the tall,’ he said.

Earlier on Wednesday, Australia’s fast bowling pair of Pat Cummins and Mitchell Starc carved through the Pakistan batting order, sharing nine wickets between them to hand the touring side a first-innings lead of 123 in the deciding test.

Captain Cummins bowled an impeccable line and length to snare 5/56, while Starc finished with the impressive figures of 4/33 from 20.4 overs.

The hosts lost their last seven wickets for 20 runs in a dramatic collapse, handing the ascendency to the tourists leading into day four.

‘I don’t think the wicket helps the quicks at all,’ left-arm quick Starc said.

‘The key is reverse swing and both teams have used that well.

‘We’ve got to stay patient, it’s a hard slog, and things are going to happen quicker as the game goes on.’