That’s a good spot! Moment two cheetahs leap onto the roof of safari vehicle and pose just inches away from stunned photographer

This is the breathtaking moment two cheetahs climbed onboard a safari vehicle in Kenya and stayed within touching distance of its passengers.

The video, filmed in Masai Mara National Reserve, was captured by a wildlife photographer Paul Mahagi.

In the footage the pair of cheetahs can be seen striding towards the Land Cruiser carrying Mr Mahagi.

One of the big cats then climbs onto the roof of the vehicle and begins to gaze across the Kenyan plains.

The second cat joined its friend soon afterwards. After a brief moment sizing up Mr Mahagi, the second cheetah also began to look at its surroundings.

Afterwards Mr Mahagi said: ‘Here is a view from inside our Land Cruiser, looking out through the roof opening.

‘A few cheetahs in the Mara have learned to use the Land Cruisers to their advantage, using the height to enable them to see further on the plains for prey or enemies.

He added: ‘I had seen this this in National Geographic video on TV, but never dreamed it would happen to me.

‘It was hard to remain calm, and try to change lenses, while wondering how long the cheetahs would be on top of our vehicle. 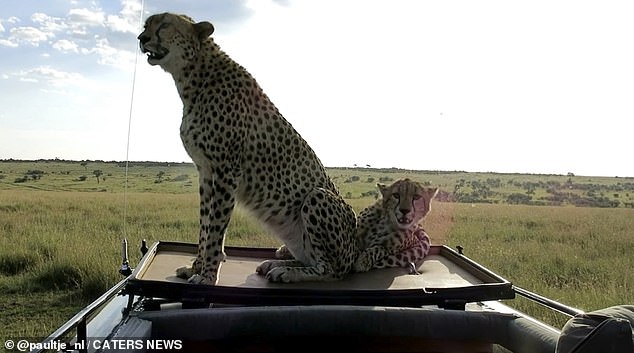 After the first cheetah decided to use the safari vehicle as a viewing platform, a second then joined it

‘The cheetahs sat on our roof for almost 20 minutes, with their tails waving in front of our noses.’

The photographer advised tourists to put their safety above getting the perfect shot.

He said: ‘Most of the tourists who have been injured have got out of their vehicles or done something unusual to attract the creature’s attention or tried to feed them.

“None of these are wise ideas. Just listen to your guides, they know what they are doing.

‘If the animals are stressed or acting out of the ordinary, then it makes sense to back off and give them the room they need to feel calm and non-stressed.’

The Masai Mara reserve has one of the largest populations of big cats and elephants in Africa.

The population of cheetahs in Africa is currently around 7,000 – less than half the total on the continent 30 years ago.