A woman has been busted drink driving with an open beer bottle in her car’s cup holder at 10am.

NSW Minister for Police and Emergency Services David Elliott met a 7News reporter at Moore Park, Sydney, on Thursday to speak about the crackdown on drink driving over the Australia Day long weekend.

As they filmed the interview on Lang Road, police conducting breath tests metres away pulled over a 47-year-old woman with a blood-alcohol level more than twice the legal limit.

Camera crews captured her being escorted by the police into their van and also spotted a near-empty beer bottle in the front of the vehicle.

‘Mam, is there a reason why you were 0.1 at 10am?’ 7News reporter Cameron Price asked her.

‘Do you realise the danger you pose to other people on the road?

‘No,’ the woman replied.

The woman blew 0.106 during the breath test and has allegedly been caught drink driving before.

She also allegedly lashed out at police while sitting in the booze bus before a police officer reprimanded her for her behaviour.

‘You shouldn’t be drinking and driving. Stop trying to deflect the blame on other people,’ the police officer said. 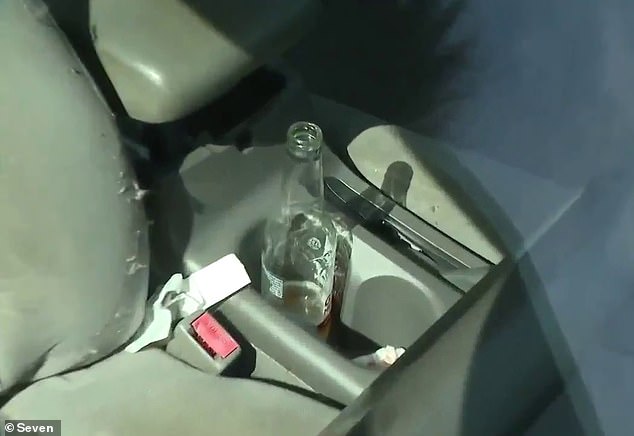 For repeat offenders, mid-range drink-driving carries a fine of $3,300 and a prison sentence of up to 12 months.

Australian drivers with a full license can drive with alcohol in their system as long as their blood alcohol level remains below 0.05.

Drivers of vehicles weighing over 13.9 tonnes, carrying dangerous goods, or public vehicles such as taxis or buses must stay under 0.02.

To stay under the limit, it is recommended that men of average size drink no more than two standard drinks in the first hour and one drink per hour after that.

Women of average size should drink no more than one standard drink per hour.