This is the horror moment a woman taking photos of her friend on a zipline platform was pushed over the edge by a machine and plunged to her death.

The unnamed woman was snapping pictures of a pal from a landing platform at a scenic tourist spot near Fenyang, northern China last week when tragedy struck.

Terrifying security CCTV of the drama shows she was apparently taking snaps of someone climbing on cables above the zipwire.

But she was apparently so engrossed in her photos she did not notice part of the ride’s machinery heading straight towards her. 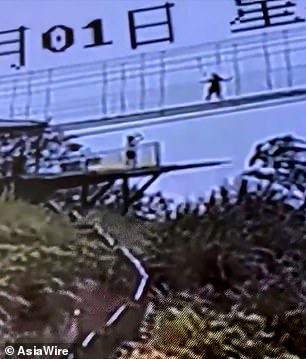 The woman raised her arms to take photos of her friend on a zipline in China. The friend appeared to be posing for the holiday snaps at the park in Fenyang, northern China

The equipment hits the woman head-on, scooping her up and carrying her over the ravine’s edge.

Two workers rush to help her but stop just before they topple over the edge themselves.

For a few heart-stopping moments she manages to cling on, but she loses her grip and falls in a plunge that would prove fatal, according to local media.

Rescuers found her hanging from a bush just a few feet above the ground. 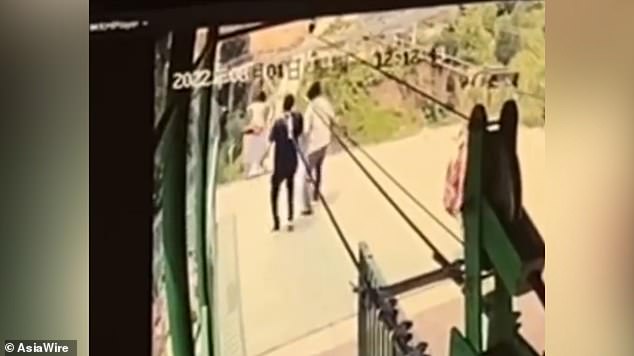 Two workers rushed forward to try to save her, but it was too late and she was pushed off it 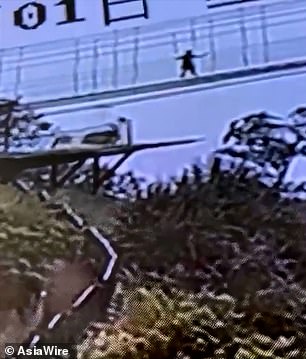 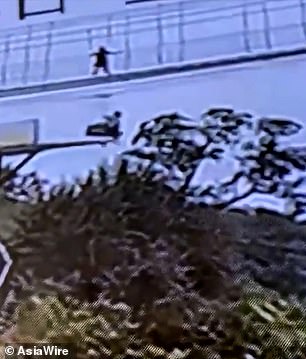 But the ride’s machinery pushed her over the edge after scooping her up and she fell fatally. A CCTV camera captured the moment she was hoisted off the ledge she was balanced on

Other footage shows them climbing on top of a tourist bus trying to get her down.

Local media reported that she died of multiple injuries at Fenyang Hospital.

Officials have not named the victim but have said she was a tourist.

The zipline business has since been shut down and a police investigation into the incident is ongoing.