This is the moment an alleged Magna Carta thief was stopped by passers-by before being handcuffed by police after being accused of trying to steal the 800-charter from Salisbury Cathedral.

The footage, filmed from a Wiltshire Police officer’s body-worn camera, shows Mark Royden being restrained by the members of the public before they hand him over.

In the short clip, Royden appears to tell officers ‘I’ve not resisted’.

The incident was filmed by Salisbury Cathedral’s works yard, where he was tackled during his escape from the site following his failed alleged smash and grab of the document.

Mark Royden, 47, is alleged to have meticulously schemed his daring theft by scouting out CCTV cameras and examining a floor plan to determine his entry and exit routes.

Now, footage has emerged of him carrying a hammer and wearing gloves, goggles and a dark hoodie in a bid to conceal his identity during his apparently brazen raid at around 4.45pm on October 25, 2018.

Pictured: Police at the scene arrest Mark Royden. The 47 year old is accused of carefully planning his entry and exit routes at Salisbury Cathedral, Wilts, by scouting out cameras and its layout 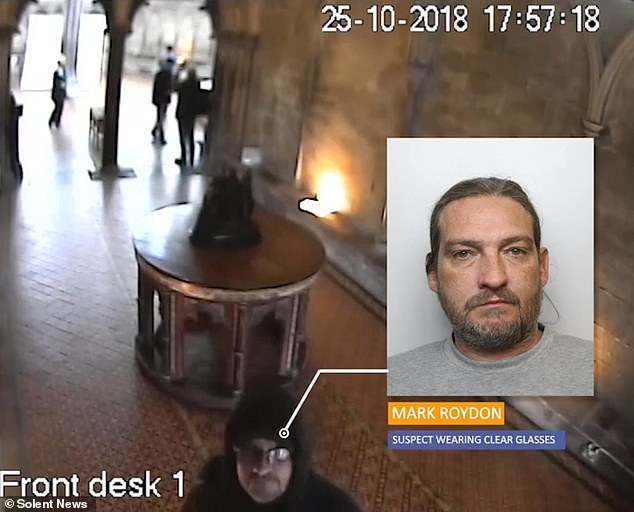 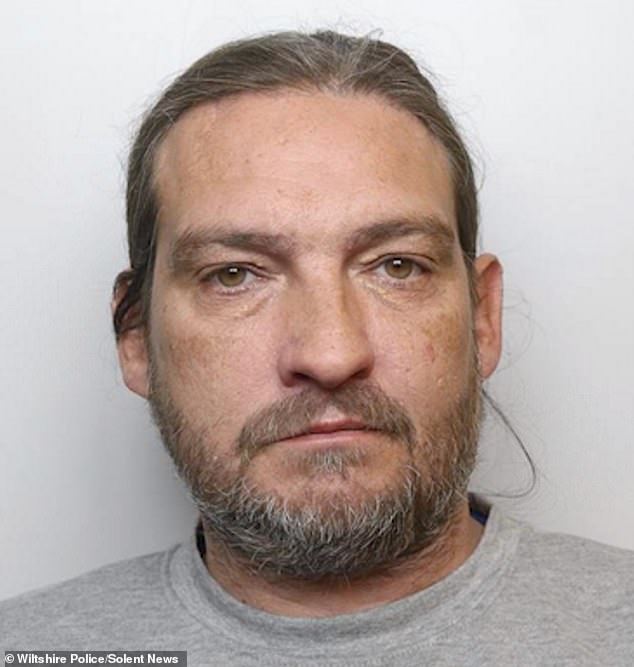 Mark Royden can be seen on the footage carrying a hammer and wearing gloves, goggles and a dark hoodie in a bid to conceal his identity

However, his attempts to disable the camera failed and he instead filmed his own face.

He used the hammer to smash into the glass case that protects the Magna Carta.

Royden’s alleged plan to steal the 800 year old document was foiled by the tough glass protecting the Magna Carta and the ‘good-spirited’ visitors and staff who tackled him during his escape.

However, the camera is only turned to its side rather than off and shows Royden walking with ‘purpose’ towards a white tent which houses the Magna Carta in the cathedral’s Chapter House.

The CCTV also shows visitors in the cathedral rushing out of the building after Royden set off a fire alarm.

Police released a ‘walk-through’ video showing the route Royden used to escape through the building before he was apprehended in the works yard.

Jurors at Salisbury Crown Court were shown the clips at the start of Royden’s week-long trial.

Opening the trial, prosecutor Rob Welling said: ‘He had planned this, he went to quite some length, he familiarised himself with the layout, where the Magna Carta would be and identified cameras and the route he would enter and leave without being seen or recorded.

‘He knew where a fire alarm would be situated by a nearby toilet block, which he could set off as a distraction. 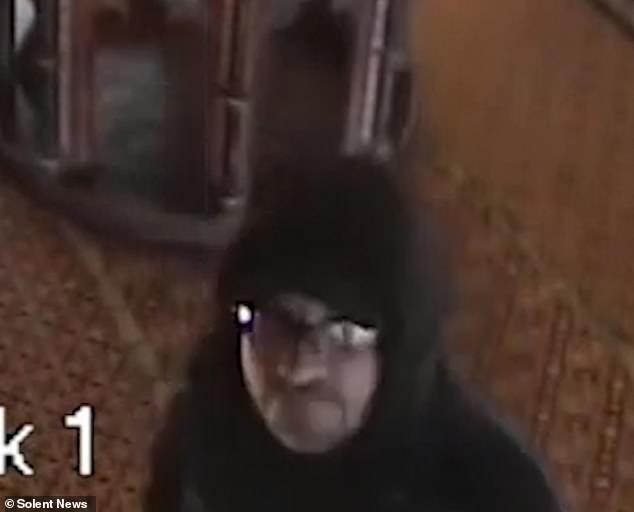 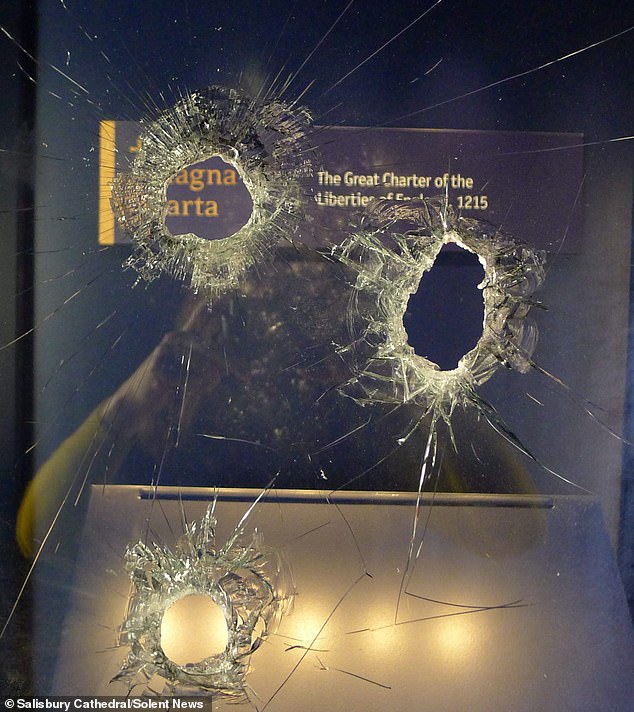 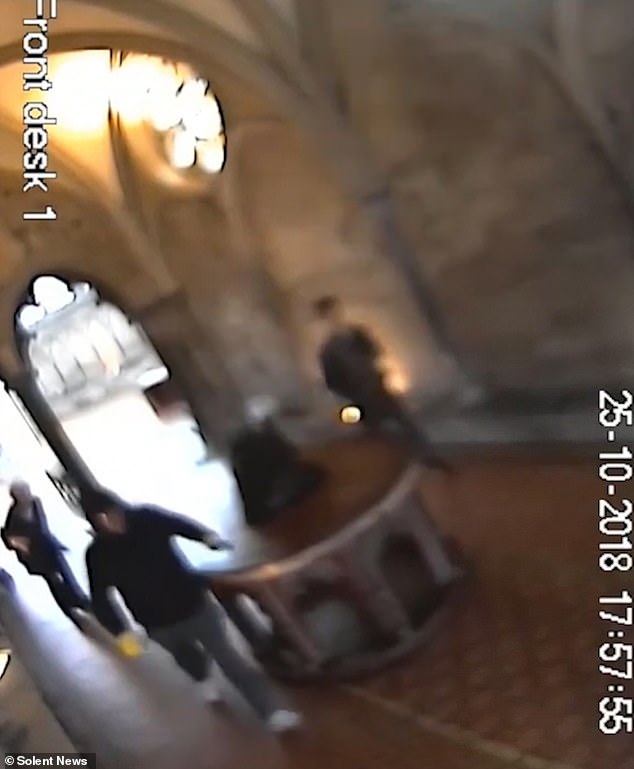 Mr Royden failed to disable the camera, instead turning it on the side, and it caught him walking towards the Magna Carta, as  well as shocked tourists fleeing (pictured)

‘He planned it late in the day just before it closed as he knew it would be quiet and wore a hooded top to hide his face.

‘He took safety glasses, a hammer and gloves to protect himself from the security glass and to avoid leaving fingerprints.

What is the Magna Carta?

The Magna Carter is a charter of rights signed in 1215 by King John of England, which guaranteed the rights of the church, protection from illegal imprisonment, access to swift justice, and limitations on feudal payments to the Crown.

It was reissued several times during the 13th century, until it was finally made part of English law.

The ancient document has lived on for 800 years, and is also used in the United States Declaration of Independence and the Universal Declaration of Human Rights.

There are four surviving copies of the original 1215 Magna Carta.

Many people believed King John to be one of the worst kings in history after he imprisoned his former wife, starved opponents to death and murdered his nephew.

He also imposed heavy taxes on his barons for expensive wars and if they refused to pay he punished them.

But the barons demanded he obey by the law and captured London so King John was forced to negotiate.

The two sides met at Runnymede in June 1215 and they wrote the Magna Carter.

The most famous clause, which is still the law today, gave all ‘free men’ the right to justice and a fair trial.

Two other clauses are still in force today – the freedom of the English Church and the ancient liberties of the City of London.

King John died of dysentery in 1216 and nine year old Henry III took to the throne.

Two copies of the 1297 version of Magna Carta have been sold. One was bought by the Australian government for £12,500 and the other was sold to US businessman David Rubenstein for $21.3 million in 2007.

‘His last act was to move a camera which he believed would hide his actions..’

He added: ‘His attempt failed for two reasons – the safety glass protecting such an important, historic document was too tough for the tool he brought and he didn’t bank on there being so many good-spirited visitors and staff prepared to intervene.’

It was also heard Royden ‘doubted the authenticity’ of the Magna Carta, a human rights treaty signed by King John in 1215 which is thought to be worth £20 million.

The court has also heard from Matt Delcambre, an American tourist, and GaryPprice, Salisbury Cathedral’s clerk of works, who tackled Royden as he fled.

Royden denies criminal damage after allegedly causing £14,466 worth of damage to the safety glass and denies attempting to steal the priceless Magna Carta.

The Magna Carta, signed by King John in 1215, enshrined the rule of law and is considered one of the most important documents in history.

Salisbury Cathedral’s priceless 800-year-old copy is the best preserved of only four surviving original exemplars in the world.

Mr Welling said during his escape Royden ‘raised his hammer in a threatening manner’ and told people to ‘f*** off’.

Describing the unsuccessful escape, he added: ‘There was a scuffle between two people and Royden to hold the door.

‘Royden gave up and fled and came up running back to the doors he entered through.

‘But by now another person, an American tourist, was in chase and with the help of the two others they came up and restrained him until police arrived.’

It was heard Royden told them he ‘would’ve got a medal for what he had done’ and ‘could have done more damage with a samurai sword’.

A bystander reported smelling alcohol on his breath.

Mr Welling added: ‘Royden made some odd comments about Muslims, Tasers and an object strapped to his back. He said someone had rubbed the hammer on him, so it had his DNA on it.’

Royden made a ‘prepared statement’ to police. It read: ‘You cannot talk to me about the Holy Grail.

‘If you find a bag on the floor which says ‘cocaine’ on it, you would have to test it forensically.

‘As for your Holy Grail, you would need a carbon test and a trace element test.

‘Places you go to and churches all over the world claim to have artefacts.’ 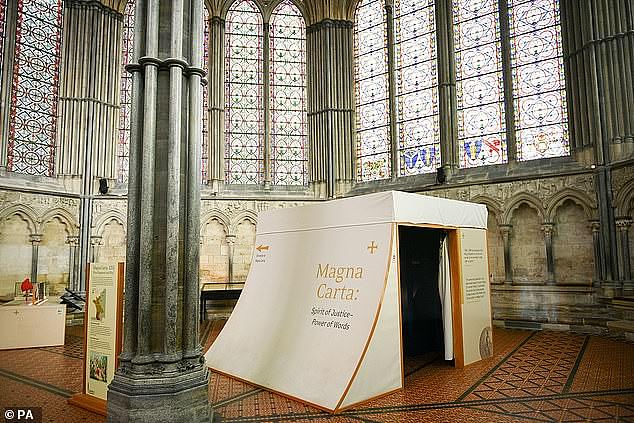 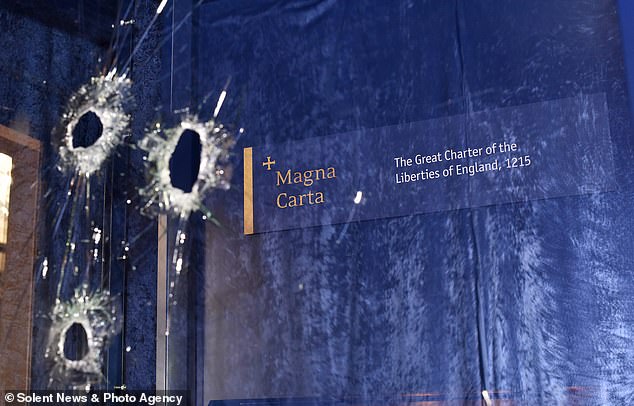 The Magna Carta, signed by King John in 1215, enshrined the rule of law and is considered one of the most important documents in history. Pictured is the damage to the case that houses it

His statement also referred to a church he visited which did not have an item it claimed to have.

Mr Welling added: ‘It looked like he had doubts over the authenticity of the Magna Carta, which makes you think he has seen it before.’

Cathedral outreach worker Leigh Chalmers told jurors: ‘He had a dark hoodie and was hunched down walking quite purposefully.

‘I remember thinking: ‘I don’t recognise you’.

‘He didn’t look lost, he looked like somebody who knew where he was going.’

Speaking about the moments after the incident, she added: ‘Someone shouted ‘he’s trying to steal the Magna Carta, stop him!”

Once he was restrained, Ms Chalmers said Royden exclaimed ‘your security is s***’.