The radical group that propped up Jeremy Corbyn last night called on Left-wing factions to unite to stop Labour being ‘taken over once more by centrists’.

Momentum, rattled by the landslide victory of the moderate candidate Keir Starmer as Labour leader, warned its wing of the party was ‘disastrously split’ and needed to come together urgently.

The new leader has spent the past week purging his shadow cabinet of the hard Left.

At the same time, moderates such as Tony Blair’s former flatmate Lord Falconer have returned to Labour’s top team.

In a statement, Momentum called for ‘unity, reflection and comradely debate on the way forward’ among Labour’s Left-wing factions.

The group said: ‘In the wake of Keir Starmer’s first-round victory … it is clear that Momentum and the Left cannot continue as it has been.

‘Unlike previous years, Momentum-endorsed candidates won neither the OMOV [One Member One Vote] vote for leader nor for the NEC, where the Left vote was disastrously split and cost us our majority.’ 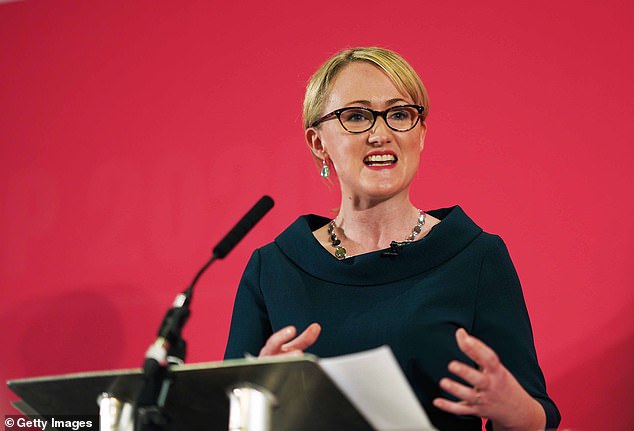 Momentum supported candidate Rebecca Long-Bailey, who lost to Kier Starmer in a landslide, and have called for the left wing groups within the party to unite

It added: ‘Our movement is in great peril of making the same mistakes we did after our defeat in the 1980s.

‘We risk retreating from the challenge of making our ideas mainstream, fighting between ourselves and allowing our party to be taken over once more by centrists.’

Last night there were signs of further splits when a new faction called Forward Momentum demanded changes in the way the hard-Left group is run.